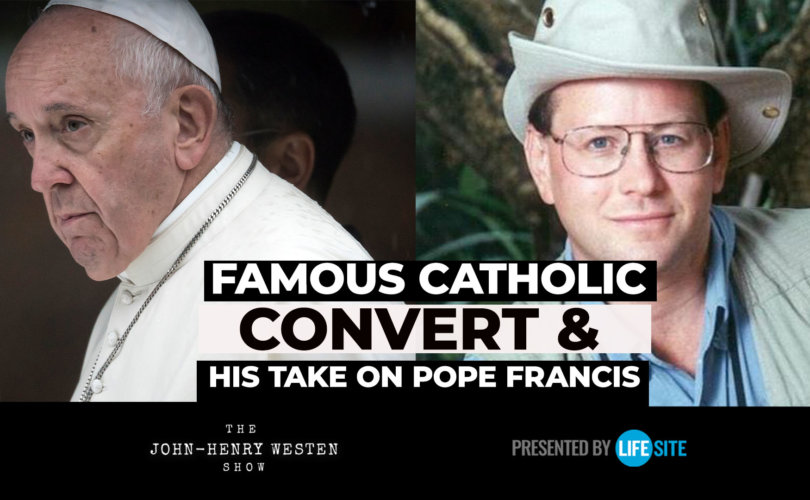 May 12, 2020 (LifeSiteNews) — Today I had the chance to speak with well-known Catholic apologist, author, and veteran tour guide of the Holy Land Steve Ray about a wide variety of topics, including his thoughts on Pope Francis.

A former Baptist, Steve shared with me what it was like converting to Catholicism and what his views are on the coronavirus and the crisis in the church.

“I was born and raised Baptist, a very anti-Catholic family. My mom and dad were converted at a Billy Graham crusade in 1953,” he said. “I was born a year later, raised Baptist. And I have to say, that even though I discovered the fullness of the Catholic Church, I have no regrets for the way I was raised because my mom and dad gave me great schooling.”

Steve and I also talked about the coronavirus and how the Church is responding to it.

“I'm very disappointed in the whole way that thing has happened,” he said. “I see people hiding themselves and closing the churches and being afraid.”

“I don't want my priest to die [but] there seems to be a lack of the sense of heroism or courage that the clergy have demonstrated in the past…I just don't see the same sense of urgency and heroics that I did in the past with other situations in history.”

“I'm amazed,” he added, at “how quiet bishops, priests and the Catholic people had been.”

Steve told me he is “worried” that after the coronavirus has passed things may not go back to normal.

“I'm afraid that we’ll get used to watching TV masses and think, you know what, this is kind of comfortable. I’ll just have a cup of coffee and watch it on TV.”

Our conversation then turned to Pope Francis, as I wanted Steve’s unique perspective on what’s going on in the church today.

“In some ways there are people in leadership of the church today who would like to be able to change [the deposit of faith]. And you know what? It makes me angry, I have to say, because this is my heritage as a Catholic. Jesus gave this not just to the pope. He gave it to all of us. We have a right to the truth and a right to the untarnished truth, the way it was handed on by the apostles and bishops of the early church and the doctors of the church and the councils. This is our right.”

“We have a right to the truth and the fullness of the truth. And I feel that there are elements in the church today trying to reach in that [deposit of faith] and change things around — put things in and take things out. And frankly, I object.”

Last September, Steve was asked by the Equestrian Order of the Holy Sepulcher to give a talk on how a John Paul II Catholic can survive in a Pope Francis world.

Astonished by the request, he wondered if they were serious. “Yes!” he said. They felt that there was “something not right going on in the Vatican” and so they wanted me to talk about Pope Francis.

He also told me that he considers himself a “very loyal Catholic to the Church, to Mother Church, to the councils of the Church and to the office of the papacy.”

“And not all of them were brilliant. Some of them were not. All were not saints. Some are great sinners. But it didn't change the fact that this is the Church and that men come and go in that chair. But my goal of being a Catholic is, I'm not here because of Peter, Paul, or Pope Francis. I'm here because of Jesus Christ. It's His Church. The popes come and go, but the Church will last forever. And I'm with the Church.”

Steve also explained to me the Church’s teaching on papal infallibility and how scripture, St. Thomas Aquinas, and St. Augustine all support the idea that Catholics ought to resist the pope when it is proper to do so. In fact, he wrote about how Catholics should do that in a book he authored titled The Papacy: What the Pope Does and Why it Matters.

If you want to hear more from Steve, visit his website CatholicConvert.com to read his many essays and watch his videos.