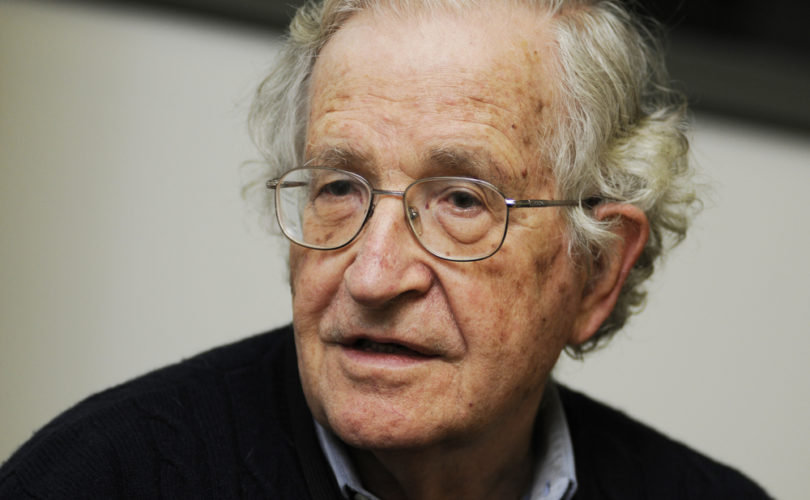 “Pornography is the humiliation and degradation of women. It’s a disgraceful activity. I don’t want to be associated with it," said Noam Chomsky.

Let me give you a few prominent examples.

Of the feminists who did speak out against pornography, writer and intellectual Andrea Dworkin was by far the most vehement. Having read some of the same research that she did, and spoken to many people whose lives have been torn apart, like she did, I can understand some of the full-throated fury that comes through in her lectures, her writings, and her books. In Pornography: Men Possessing Women, she eviscerated her comrades on the Left for their acceptance of pornography:

Her work is chilling to read, because she uses crude and graphic language to create a horror in her audience as she describes pornography for what it really is. Knowing the state of our porn-soaked university campuses, I wonder what the audience at a lecture she gave at the University of Chicago Law School felt:

“Dehumanization is real. It happens in real life; it happens to stigmatized people. It has happened to us, to women. We say that women are objectified. We hope that people will think that we are very smart when we use a long word. But being turned into an object is a real event; and the pornographic object is a particular kind of object. It is a target. You are turned into a target. And red or purple marks the spot where he's supposed to get you.”

And I wonder what all of the pseudo-Marxist fanboys I went to university with would think if they knew what Noam Chomsky had to say about pornography. When asked about it in an interview, he was abruptly dismissive:

“Pornography is the humiliation and degradation of women. It’s a disgraceful activity. I don’t want to be associated with it. Just take a look at the pictures. Women are degraded as vulgar sex objects. That’s not what human beings are. I don’t see anything to discuss.”

“The fact that people agree to it and are paid,” Chomsky replied, “is about as convincing as the fact that we should be in favor of sweat-shops in China where women are locked into a factory and work fifteen hours a day and the factory burns down and they all die. Yeah, they were paid and they consented, but that doesn’t make me in favor of it. So that argument we can’t even talk about. As to the fact that it’s some people’s erotica, well, that’s their problem. Doesn’t mean I have to contribute to it. If they get enjoyment out of humiliation of women then they have a problem.”

Radical feminist Naomi Wolf takes it a step further—she says that pornography not only degrades and humiliates women, but seeks to replace them entirely. Men don’t need real women anymore, since they can type the specific woman, specific sex act, specific anything into a Google search bar and the depraved depths of the Internet will vomit up their preferred perversity.