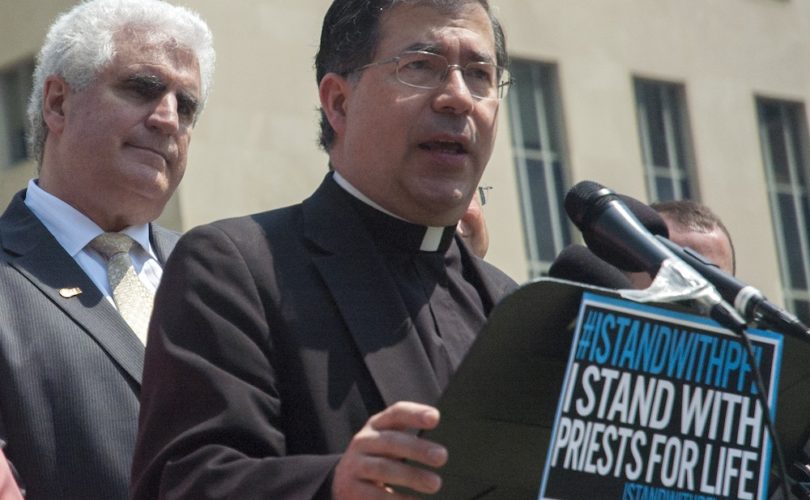 (LifeSiteNews) – As news of Father Frank Pavone’s unexpected laicization spreads, questions have arisen about the nature of the canonical action, particularly about the idea that he had done something blasphemous and whether such an offense would warrant such a penalty.

According to the original article by Catholic News Agency (CNA) which broke the story not only to the public but to the priest himself, Father Pavone was laicized due – at least in part – to “blasphemous communications on social media.”

It is believed that his allegedly “blasphemous” social media behavior includes a spat of tweets from 2020 when Father Pavone engaged with a pro-abortion politician on Twitter in which he used the Lord’s name in a heated manner, thereby offending people.

The tweets where he used an expletive are now gone, but Father Pavone had followed the word “God” with the word “damn” in his communication online.

Whether this constitutes formal blasphemy or not is not really the issue, as Father Pavone has made it eminently clear that when he posted irresponsibly that he had allowed himself to become heated and, in his zeal to defend the unborn, he said something he shouldn’t have.

LifeSiteNews editor-in-chief John-Henry Westen pointed this out in his video on the matter, highlighting that Father Pavone himself admitted that he should not have said what he said, and that he had apologized, and that he had confessed any wrongdoing in the confessional.

A clip from a livestream from Father Pavone was included in Westen’s video where the priest says that his bishop – Bishop Patrick Zureck – said that “Father Frank committed blasphemy because he’s damning this person to Hell and is saying that God is doing that.”

Father Pavone chuckled and asked rhetorically if Zureck “lived in the same planet” as the rest of us. “Sometimes we get mad,” he added “and sometimes we get so mad that we say a little bad word.”

It does not take a canon lawyer to question the laicization of a priest over an outburst that could reasonably be denied as being even mortally sinful, given that it was a moment of passion and motivated by a love for the unborn and a righteous hatred of abortion, without the clear intention to offend God or judge the soul of a man.

It is reasonable to ask yourself if there is something more to the story.

Baby on the ‘altar’: Father Pavone did not ‘desecrate’ anything

Some are pointing to a moment in November 2016 when as part of his pro-life work, Father Pavone filmed an aborted baby on what appeared to be an altar as part of a push to have Catholics support then-candidate Donald Trump, who was legitimately pro-life.

Bishop Zureck called what happened a “desecration of the altar.”

The problem with the accusation of desecration is that it was not in fact a desecration of an altar, as it was a table that was sometimes used to celebrate Mass and not a consecrated altar of the Church.

Now, it may be that it was in poor taste, and Father Pavone admitted that he should have used a different setting so that there would be no confusion, but if we are being technical, he did not desecrate anything.

In addition, the baby was given to Father Pavone to conduct a proper burial for the poor aborted soul.

My goodness, we are talking about a priest who was given the aborted body of a dead child to perform a dignified burial, and we are concerned that he might have missed the mark with his heartfelt appeal that this madness be stopped?

What is wrong with the hierarchy of the Church that many are more worried that Father Pavone did something in poor taste and not that a literal dead baby was given to him because of the crime of abortion?

If I am being honest, if someone handed me an aborted baby I don’t know if I would have acted as calmly and measured as Father Pavone.

Also, the infamous video isn’t even listed as a cause of his laicization, which include the alleged blasphemy on Twitter and his “persistent disobedience” of the Bishop.

What about the law?

Again, let us assume that the accusations by Father Pavone’s bishop are true and that he did something wrong and should be disciplined for it. What would the adequate penalties be in that case?

Based on an interview between eminent canonist Father Gerald Murray and CNA, what was done to Father Pavone smells of illegality and illicit legal maneuvering.

Murray told CNA when asked whether the punishment fits the crime. Murray said: “… the Code of Canon Law does not state that the possible penalties for these two offenses include dismissal from the clerical state.”

Father Murray explained that disobedience could be punished by various canonical censures, but that dismissal from the clerical state is not included in the requisite penalties for sins of disobedience.

Another issue is that Father Pavone was told that he could have no canonical recourse and appeal the decision.

Father Murray pointed out that this was also illicitly stated, as only the Pope, who enjoys “full and supreme power in the Church” (canon 332, 1), is able to issue such a penalty without the hope for an appeal. Father Pavone’s penalty was leveled by the Dicastery for the Clergy and communicated by Archbishop Christophe Pierre.

Also, a future pope could rescind the decision, as it is not an infallible act of faith and morals.

There is more that could be said, but it is clear that things just aren’t adding up in the Father Pavone case.

If I was a betting man I would say that the liberal hierarchy went after one of the most powerful voices in the Catholic pro-life movement in America to make an example of him.

I expect that this will set precedent, and that Father Pavone will be the first of many.