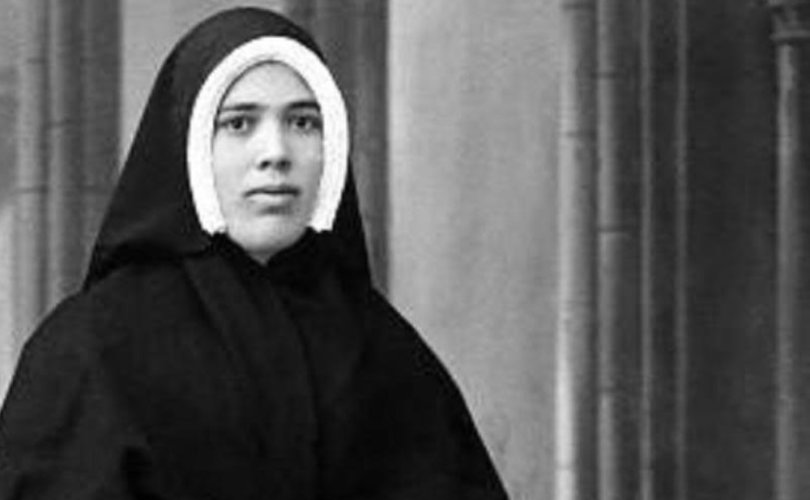 June 9, 2020 (LifeSiteNews) – There is a small part of an interview conducted by the well-respected American historian and book author, William Thomas Walsh, with the Fatima seer Sister Lucia that might now strike a special note with us, in light of the ongoing disorderly and revolutionary conditions in the U.S.

Sister Lucia of Fatima was one of three children who witnessed apparitions of the Blessed Mother in 1917 in Fatima, and she continued to receive messages from heaven for years afterward. One of the messages pertains to the then-impending Bolshevik Revolution in Russia and the need to consecrate Russia to the Immaculate Heart of Mary.

In 1947, Professor William Thomas Walsh authored a book about Fatima, titled Our Lady of Fatima, at the end of which he recounts in an epilogue an interview he had conducted with Sister Lucia of Fatima the year before.

Speaking with the seer in 1946 about the Blessed Mother's earlier request that Russia be consecrated by the Pope together with the bishops in the world to Her Immaculate Heart, Sister Lucia told Professor Walsh:

“What Our Lady wants is that the Pope and all the bishops in the world shall consecrate Russia to her Immaculate Heart on one special day. If this is done, she will convert Russia and there will be peace. If it is not done, the errors of Russia will spread through every country in the world.”

“Does this mean,” Walsh then asked, “in your opinion, that every country, without exception, will be overcome by Communism?” And Sister Lucia answered: “Yes.”

That is to say, the seer of the apparitions of Our Lady of Fatima, which have been approved by the Catholic Church, predicted that the United States, under certain conditions, would also become Communist.

This answer might have sounded somewhat unrealistic in 1946, just after the end of the Second World War and the beginning of the Cold War. However, today, in light of these revolutionary riots that seem to change America in a very deep way, they might strike an even stronger tone.

Black Lives Matter appears to be the organization that is at the center of the revolt against the established structures in the U.S., for the defunding of police and a radical change of society. Their influence is being proven by the fact that Washington D.C. just named a square next to St. John's Church that had been put to fire by some of the protesters Black Lives Matter Plaza.

The group has received heavy funding from the wealthy promoter of leftist causes, George Soros (as did its partner organizations Color of Change and the National Association for the Advancement of Colored People NAACP.)

Looking into the official agenda of Black Lives Matter, one can easily detect the Marxist anti-family and LGBT ideology of this movement that has been funded by those outside the black community, such as the globalist Soros:

“We disrupt the Western-prescribed nuclear family structure requirement by supporting each other as extended families and 'villages' that collectively care for one another, especially our children, to the degree that mothers, parents, and children are comfortable.

We foster a queer‐affirming network. When we gather, we do so with the intention of freeing ourselves from the tight grip of heteronormative thinking, or rather, the belief that all in the world are heterosexual (unless s/he or they disclose otherwise).”

Another aggressive element of the current violent protests which has been called out by President Trump himself is the Antifa movement. As recently has been pointed out, the symbol the Antifa movement still uses today – two flags placed on top of each other – goes back to the founding of the Antifaschistische Aktion (Anti-fascist Action) in the 1930s by German Communists. And even the more recent successors of this original movement were organized in the 1970s by the German Maoist Communist League (Kommunistischer Bund). Thus, also this strain of the current violent and aggressive protests in the United States are of Communist inspiration. They have in common an anarchistic view against state authority and especially against the police.

As Fox News' Tucker Carlson recently commented on this new political development that aims at defunding the police departments yet at the same time suppresses messages from citizens who announce they will defend themselves with their own weapons: “This is a move toward authoritarian social control.” “They create the chaos,” he stated on 8 June, “you are not allowed to defend yourself.”

The future of the left as Tucker Carlson sees is that only those will have weapons “who are on their team, and that is exactly what 'defund the police' really means,” that is to say: “partisan law enforcement.” Carlson also described in his show the “vicious crackdown on free speech and free thought” that has been taking place in the last couples of days. The new rule is: “You are not allowed to question Black Lives Matter in any way,” and this is being enforced by social media giants like Facebook and others. After adding that “we have never lived in an environment like this,” the journalist added that many people get the message and follow suit. “And the weak ones are very quick to join in, just like the little Red Guards they have always been underneath of it all,” he explained.

Also in light of the outrageous acts of lootings and riots which have terrorized millions of Americans over the course of the last two weeks, we can surely say that we are getting closer to at least a Communist atmosphere in America. We more and more feel reminded of an atmosphere similar to Eastern communist countries in Europe whose citizens had to support the thesis of the proletariat's enduring suffering and moral superiority, at the end of which one had to be ashamed of one's own background and heritage if one was not of proletarian background. Purges followed, to include the removal of “counter-revolutionary statues” and other items of tradition and heritage. The damage to millions of lives worldwide is well-known.

In all of these turmoils, a weakened Christianity is becoming further eroded, as we can now witness it with our own eyes, where an archbishop rebukes the U.S. President for visiting a Catholic shrine and a priest hopes that George Floyd intercedes for us already from heaven, independently of his own moral life here on earth.

We might also remember here Archbishop Carlo Maria Viganò's new open letter to President Donald Trump, in which he writes: “We will also discover that the riots in these days were provoked by those who, seeing that the virus is inevitably fading and that the social alarm of the pandemic is waning, necessarily have had to provoke civil disturbances, because they would be followed by repression which, although legitimate, could be condemned as an unjustified aggression against the population. The same thing is also happening in Europe, in perfect synchrony. It is quite clear that the use of street protests is instrumental to the purposes of those who would like to see someone elected in the upcoming presidential elections who embodies the goals of the deep state and who expresses those goals faithfully and with conviction. It will not be surprising if, in a few months, we learn once again that hidden behind these acts of vandalism and violence there are those who hope to profit from the dissolution of the social order so as to build a world without freedom: Solve et Coagula, as the Masonic adage teaches.”

In light of Archbishop Viganò's words on the Masonic rule, let us remember here a historic 1918 letter – written not long after the 1917 apparitions in Fatima – in which the Catholic Church is being warned by the German Emperor Willhelm II of the impending Bolshevic takeover as part of a Freemasonic plan to establish a “world republic.” This letter is authentic and has been found in the Secret Vatican Archives.

The message of the Emperor was “that, according to news that came to him yesterday, the [Freemasonic] Grand Orient has just decided first to depose all Sovereigns – first of all him, the Emperor – then to destroy (?) the Cathol.[olic] Church, to imprison the pope, etc and, finally, to establish on the ruins of the former bourgeois society a world republic under the leadership of American Big Capital. The German Freemasons are purportedly loyal to the [German] Emperor (which is to be doubted!) and they informed him about it. Also England wants to preserve the current bourgeois order. France and America, however, are said to be under the full influence of the Grand Orient [Freemasonic Lodge]. Bolshevism is said to be the external tool to establish the desired conditions. In the face of such a great danger which threatens in addition to the Monarchy, also the Catholic Church; it is thus important that the German episcopacy be informed and that also the pope be warned.”

This letter is more than one hundred years old. Our readers can judge for themselves whether there can be seen parallels to our current situation.

May we be aware of these insidious beginnings and resist them as long as we still can. But not only with practical means such as articles and items of news; most importantly, this needs to be done with spiritual means. We need to pray the Holy Rosary, do the devotions to the Immaculate Heart of Mary as asked from us by heaven, and, finally, we need to insist that the full, explicit, and correct Consecration of Russia be done, as Cardinal Raymond Burke and the Italian historian Professor Roberto de Mattei have, just recently, called for again.