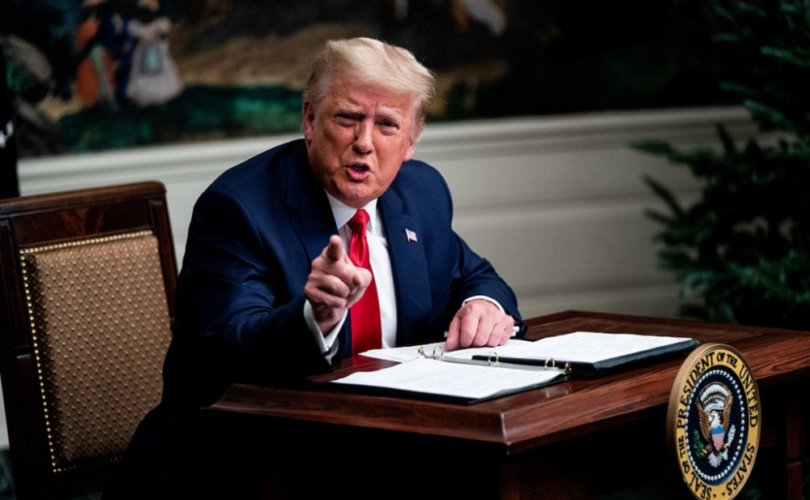 Only that’s not what the attorney general said.

The Department of Justice quickly put out a statement attempting to clarify the record:

Some media outlets have incorrectly reported that the Department has concluded its investigation of election fraud and announced an affirmative finding of no fraud in the election. That is not what the Associated Press reported nor what the Attorney General stated. The Department will continue to receive and vigorously pursue all specific and credible allegations of fraud as expeditiously as possible.

As always in these situations, the damage was already done. The later clarification received virtually no coverage, leaving most people in America laboring under the misconception that the A.G. had found little evidence of voter fraud.

This is exactly what the mainstream media and their hi-tech counterparts want you to think. They are so determined to gaslight Americans into accepting the results of a clearly fraudulent election that they are willing to propagate fake news to do it.

But having cleared up the record where Barr’s statement is concerned, I have to say this: we will not be rescued from our current electoral predicament by the DOJ or the FBI, both of which are clearly dragging their feet on any investigation. Whistleblowers report that their calls to the FLI to report fraud have not been returned. No ballot boxes have been sealed by order of federal prosecutors, and there has been no movement to, say, seize Dominion voting machines on the part of the DOJ, either.

To say there’s double standard at work would be an understatement. Without a shred of evidence of wrongdoing on President Trump’s part, the DOJ went ballistic on him. The FBI set up General Flynn and carried out a reprise of the Normandy invasion on poor Roger Stone. They seized computers and cell phones and pored over every email to find evidence of wrongdoing and came up with…nothing.

Now we have hundreds of witnesses signing lengthy affidavits detailing all manner of hi-tech and low-tech voting fraud, and it turns out that the DOJ can’t even be bothered to look at it.

You get what’s going on here?

Another reason that the DOJ won’t save us from election fraud, aside from its clear institutional bias, has to do with timing. Criminal investigations typically take weeks or months to finalize, while we have only days to expose the fraud before the Electoral College meets on December 14.

What will save us is a two-pronged approach focused on (1) state legislatures in key swing states and (2) the Supreme Court.

Over the past several days, a series of blockbuster hearings have been held with state legislators in Pennsylvania, Arizona, Michigan, and Georgia. At those hearings, witness after witness has testified to observing voter fraud of one kind or another.

One poll-watcher in Michigan told the committee he witnessed the alleged 4:30 A.M. dump of more than 130,000 votes for Biden after Election Day. He said the ballots were wheeled in on dollies, and everyone was “perplexed” that they were coming in so late.

In Georgia, video footage shows suitcases filled with ballots pulled from under a table after a supervisor told Republican poll workers to leave the room. The supervisor and three others stayed behind to keep counting votes and ran over 18,000 votes through the tabulators.

Military ballots, coming in from overseas and other states, were a particular target.

It goes without saying that this flies in the face of everything we know about the support that the president enjoys from soldiers, sailors, and airmen. They went 2 for 1 for Trump in 2016, after all.

A cyber-security genius who goes by the Twitter handle @CodeMonkeyZ has exposed how you can manipulate the data of electronic voting machines to get the election results you want. He caught a Georgia election official using a thumb drive to extract data from the voting machines, plugging the thumb drive into a laptop, and then “filtering” the data. He shows how the system was used to delete entire batches of Trump votes or shift them to Biden.

Finally, everyone should note that at each hearing, a member of the 305 Military Intelligence Battalion submitted evidence to the effect that China, Iran, and other bad actors were linked into the computer servers that were tabulating the votes, and that “packets of information” were being sent to servers in Frankfurt.

There is much more happening in the state courts of all the swing states as well, each of which has the potential to wind up before the Supreme Court for adjudication.

I remain convinced that, be it through the courts, the state legislatures, or the U.S. Congress, President Trump’s re-election will be confirmed.

No thanks will be due to the DOJ or the FBI for this victory. Both have been missing in action.

Rather, credit for the victory will go to the American people and their champion, Donald Trump.

We the people own this country and our Constitution. We the people elect our leaders in free and fair elections. And we the people are going to make sure it stays that way.