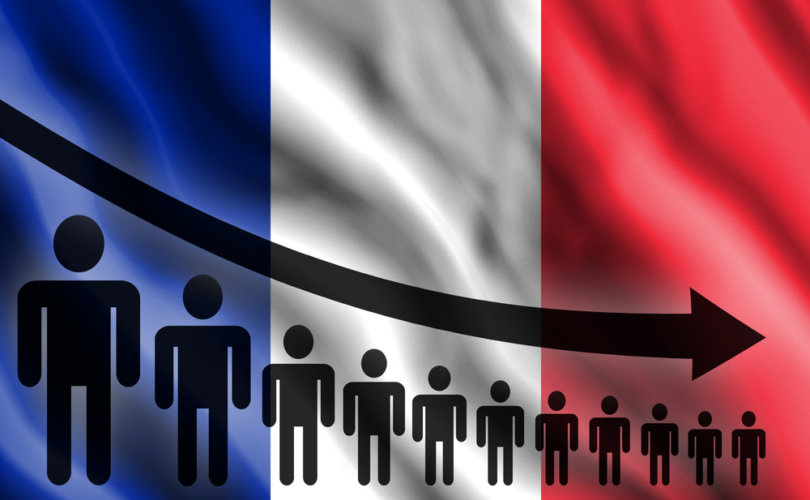 France first went into full lockdown between March 19 and May 11 of last year. Since then, restrictions have come and gone, while masks are compulsory in all great cities and many small ones.

The last comparable decline occurred between August and November of 1975, with decreases in births compared to the same months in 1974 extending from 10 to 14 percent. The end of France’s baby-boom happened roughly nine months after the legalization of abortion in January 1975.

COVID-19 restrictions appear to be having a similar effect on France’s once “exceptional” natality, compared with other European countries. When the first lockdown set in, it was jokingly announced that we should expect a baby boom nine months later as couples stayed at home and had nothing else to do than to procreate. Not true. France was already in a serious downward trend, and the sanitary crisis has made things worse.

It should be added that during that first lockdown, government messages about the “essential” character of access to abortion and easing of abortion procedures were high up on the agenda. These measures included lengthening of access to chemical abortion outside of hospitals from 7 to 9 weeks of amenorrhea, telemedicine consultations to obtain chemical abortion prescriptions and pressure on independent doctors and midwives to prescribe and oversee chemical abortions. Official posters were placed at the entrances of supermarkets, including hotlines for family planning, as well as access to contraception and abortion. These measures were reinstated during France’s second lockdown in November

Abortion statistics for the previous year are often available only in September, so the impact of these measures will only be known later this year. But official statistics show that the trend was already indicating a higher number of abortions in 2019: They reached an all-time official high with more than 232,000 abortions, compared to 224,300 abortions in 2018. 70 percent of these were chemical abortions, with the rest being mainly surgical abortions up to 14 weeks amenorrhea (12 weeks gestation). Despite France having an exceptionally high “contraceptive coverage,” its abortion rate reached 16.1 per 1,000 women of child-bearing age (compared with 7 in neighboring Germany). The rate has been steadily rising since 1995.

France’s fertility rate also remained in its overall downward trend in 2020, before the effects of lockdown led to fewer conceptions. With 2.02 births per woman of child-bearing age in 2010, France was not so very far from the population replacement rate of 2.1. This rate has slowly gone down since then and fell to 1.837 in 2020, compared to 1.864 in the previous year. Women’s average age when first giving birth has now reached 30.8 years (up from 29.3 years in 2000). Daily births have been consistently and visibly lower in 2021 since mid-March, compared to the previous year.

In 2020, only 735,000 births were registered in France, according to the National Statistics Institute INSEE estimate — the lowest number since 1945 at the end of the Second World War. The downward trend has been strong since 2010 (instead, yearly births were on the rise between 1994 and 2010) and are way down compared with the 850,000 to 916,000 yearly births registered between 1960 and 1975, when France’s population was smaller. The population has continued to grow since then because of immigration and greater life expectancy. Both numbers decreased last year but not enough to prevent population growth amounting to 0.3 percent in 2020.

The number of marriages also fell spectacularly in 2020, down to 144,000 (plus 4,000 same-sex “marriages”): a plunge of more than 34.1 percent compared to the previous year. Weddings were prohibited during three months of lockdowns, and numbers of guests were officially restricted the rest of the time, leading many couples to postpone marriage plans. Civil unions, which can result in divorce unilaterally by a mere registered letter, were already on the rise and had almost overtaken marriages in 2019; numbers for 2020 have not been published.

Demographers expect that the spectacular fall of the number of births in 2020 will be followed by a spike as couples who put off having a baby catch up with their plans once the pandemic is over. Didier Breton, who teaches demography at the University of Strasbourg, believes the reason births were postponed was mainly fear for the future and professional and economic insecurity.

Gilles Pison of the National Institute of Demographic Studies (INED) quoted unemployment and uncertainty regarding the future. To date, social “safety nets” have ensured that salaries are more or less paid out despite lockdowns — and the collapse of the tourist, leisure, and catering industries in particular — but these government pay-outs will not last forever. Many are worried about a much larger crisis when COVID restrictions are lifted at last, with multiple bankruptcies and direct and indirect job losses. Nevertheless, he expects a sharp rise in births quite soon.

Not so Didier Breton, who foretold a continuing slump in births for “three to four years,” as the aftermath of the restrictions continues to produce its effects, and is conjoined with the already visible decline since 2014. This has been helped along by a decline in government aids and tax breaks for families.

The sheer anxiety caused by daily messages of doom and fear on the part of the authorities and the mainstream media have played a role in the present birth dearth France is facing. While COVID has not hit young and healthy people of child-bearing age, its psychological repercussions may have affected fertility according to director Arnaud Régnier-Loilier of the INED.

Pregnant women have also faced more problems: The difficulty of getting in-person medical attention, the lack of direct meetings with family and friends leading to less support through human contact, perhaps even the fear of having to give birth with a mask (as has happened in countless maternity wards in France, with doubtful assurances on the part of the health minister Olivier Véran, but only as late as November, that this could not be imposed on women during labor) have all combined to make pregnancy and birth appear like an obstacle course.

Fear of death is slowly leading the population into fear of life itself.