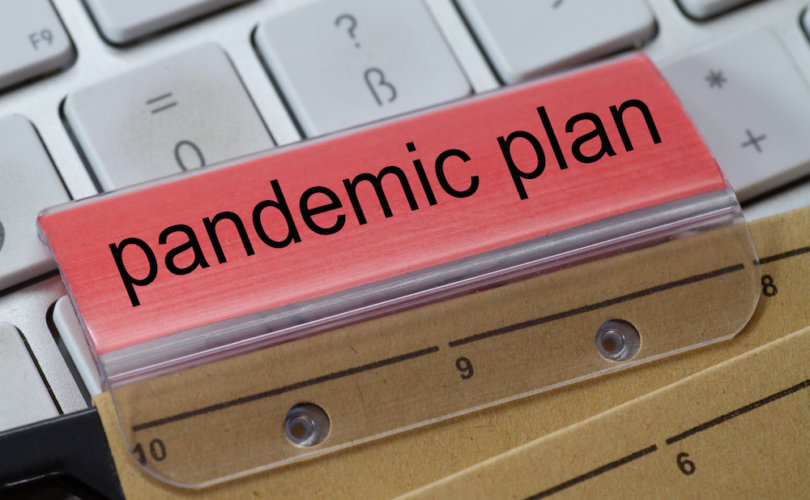 (LifeSiteNews) – A proposed amendment to a 2019 federal law would have allowed federal agencies to conduct vague, pandemic-related “drills and operational exercises” just before the onset of the COVID crisis – and an amendment eventually included in the bill may have had a similar effect.

This article provides more significant information which suggests that the COVID-19 pandemic may be a falsified national and international hoax, ruse, ploy, national security operational exercise, or other falsified “activity.” While this article does not thoroughly discuss the question, one might reasonably ask if a falsified pandemic committed by U.S. government national security officials, public health officials, and politicians would be terrorism. Without being an expert, one could predict that a falsified pandemic would greatly harm America and other countries and thus could be used as terrorism.

Before getting to the information suggesting COVID-19 is a falsified exercise, it is necessary to mention again that in 2016, the Obama-Biden administration ordered the FBI and Department of Justice to link “public health and law enforcement” and to coordinate with countries such as China, Iran, Russia, Ukraine, Saudi Arabia, Turkey, and other potentially terroristic governments, through the International Criminal Police Organization (INTERPOL), “on the Global Health Security Agenda and its successful implementation.”

This may be significant in part because if the implementation of the Global Health Security Agenda included a falsified pandemic and is therefore terrorism and a crime against the United States, then the FBI would apparently be the entity to investigate such potential terrorism committed by U.S. government officials. But if the FBI is coordinating the terrorism, then, of course, there probably won’t be an honest investigation.

The Obama-Biden administration’s ordering of the FBI to “coordinate with INTERPOL on the Global Health Security Agenda and its successful implementation” may also refer to the use of law enforcement/police and intelligence entities to intimidate and/or eliminate potential whistleblowers; history shows that it sometimes only takes one good and honest person to bring down widespread corruption. “Successful implementation” of a falsified pandemic or “global health security agenda” might require intimidation and/or elimination of whistleblowers, judges deciding cases on government forced injections, etc.

The FBI’s and DOJ’s recent history suggests the use of covert “law enforcement” as corrupt political entities; and the U.S. federal government’s anti-freedom response to COVID-19 in itself suggests widespread corruption. Thus, the methods and advanced technologies used by the FBI and other law enforcement entities may be relevant to this discussion.

False investigations can be used as a weapon against innocent Americans in that they may involve stalking and harassment with covert law enforcement or intelligence community employees. “Investigations” also may involve stalking and harassment of acquaintances of the target of the false investigation. (Page 5) Such methods, including deliberate committing of crimes, were used by the FBI or other intelligence agencies in the past. (Pages 5, 10-12, etc.)

One problem with the Obama-Biden Administration’s ordering of the FBI to link law enforcement with public health and successfully implementing the Global Health Security Agenda might be summarized best by a document from the U.S. Senate describing previous crimes committed by the FBI and U.S. intelligence community:

intelligence activity in the past decades has, all too often, exceeded the restraints on the exercise of governmental power which are imposed by our country’s Constitution, laws, and traditions. Excesses in the name of protecting security are not a recent development in our nation’s history…Intelligence activity, on the other hand, is generally covert. It is concealed from its victims and is seldom described in statutes or explicit executive orders. The victim may never suspect that his misfortunes are the intended result of activities undertaken by his government, and accordingly may have no opportunity to challenge the actions taken against him. (Pages 2-3, emphasis added)

The U.S. Senate document indeed implies that covert stalking with the intent to cause harm was used by the FBI and other entities. It is documented that the ultimate intent might have been to cause the targeted person to harm themselves. (Page 11) And rather than eliminate such covert activities, it appears as though President Joe Biden (as a U.S. Senator) and others U.S. officials greatly expanded the use of potentially covert intelligence and/or law enforcement personnel across the nation. (108 STAT. 1807-1808) The law implies potential use of covert employees. (Not all opinions in linked sources are endorsed.)

Here’s one way in which such covert government actions could cause harm and potentially death: as the above-mentioned U.S. Senate document mentioned, people who are victims of the covert actions of law enforcement or intelligence agencies like the FBI “may never suspect that…misfortunes are the intended result of activities undertaken by [the U.S.] government.” “Misfortune” often causes suffering.

In the modern Big Pharma society such suffering may be much worse. What is one possible consequence of a person experiencing “misfortunes” and covert stalking and/or harassment? Sometimes the victim may begin using illicit chemicals. (The contents of this article or other articles by this author are not medical advice.) Or, because the government actions may involve covert stalking or harassment with not-in-uniform law enforcement or intelligence agency personnel, others may be misdiagnosed and may be wrongly prescribed certain chemicals. And what is one of the common consequences of using certain illicit chemicals? And what is a major “adverse effect” of certain prescribed chemicals which act on the brain? Remember, the FBI’s previous intent was to cause misfortune and attempt to convince targeted persons to harm themselves.

In other words, if the U.S. federal and/or local governments wanted to remove certain political opponents or other persons from society as they did in the past, such covert methods that they have used in the past, combined with chemicals with sometimes torturous effects, may be a way to do so.

And, again, due to the potential use of advanced technologies that may remotely and covertly act on the human brain and/or body, the current actions of the FBI and other intelligence or covert law enforcement entities may be even worse than the past. Covert and remote torture is not beyond the realm of possibilities. It seems that Americans should demand that such entities are no longer allowed to operate with such secrecy.

Those subjects cannot be further discussed here, though. This article provides even more information which suggests that COVID-19 may be a falsified pandemic. Previous articles discussed significant information in the Pandemic and All-Hazards Preparedness and Advancing Innovation Act of 2019. Before that became law, though, there was another version of the bill which implies that a falsified operational exercise with “emerging infectious disease” enacted by the U.S. government and others may have been in the planning phase. An “emerging infectious disease program” was proposed to be established as follows:

“(e) EMERGING INFECTIOUS DISEASE PROGRAM.—  The Secretary [of Health and Human Services], acting through the Director of BARDA,  shall establish and implement a program that supports research and development, and manufacturing infrastructure, activities with respect to an emerging infectious disease.” (Page 88, emphasis added)

And what was one of these potential “activities with respect to emerging infectious disease”? The same bill provides the suggested amendment entitled “Strengthening National Preparedness and Response for Public Health Emergencies” which would have enhanced the duties of the Assistant Secretary for Preparedness and Response to include “comprehensive, synchronized, and mutually supportive” “drills and operations exercises” with the “emerging infectious disease program.” The proposed amendment (Pages 3-4) is difficult to understand without the wording of the law to be amended. The proposed amendment is emphasized as it would have appeared if it was passed:

[Subject to the authority of the Secretary, the Assistant Secretary for Preparedness and Response shall utilize experience related to public health emergency preparedness and response, biodefense, medical countermeasures, and other relevant topics to carry out the following functions:]

Carry out drills and operational exercises, in consultation with the Department of Homeland Security, the Department of Defense, the Department of Veterans Affairs, and other applicable Federal departments and agencies, as necessary and appropriate, to identify, inform, and address gaps in and policies related to the pandemic influenza and emerging infectious disease program established under section 319L(d), or all-hazards medical and public health preparedness and response, including exercises based on—

(ii) unknown threats for which no countermeasures are available.

Such drills and operations exercises shall be comprehensive, synchronized, and mutually supportive. (42 U.S. Code § 300hh–10(b)(4)(G), proposed amendment emphasized, from pages 3-4)

The proposed amendment also wanted to make sure it was written into law that “such drills and operations exercises shall be comprehensive, synchronized, and mutually supportive.” “Synchronized…and mutually supportive” appears to imply that different government entities – potentially including the Department of Homeland Security/FEMA’s National Exercise Program – should synchronize and support “comprehensive” exercises with the Department of Health and Human Services’ exercises, including exercises related to “emerging infectious disease.”

Like other articles mentioned, why would it be necessary to attempt to put such wording into law unless a “comprehensive, synchronized, and mutually supportive” exercise was being planned and required more legal protection for those planning it?

“(1) IN GENERAL.—In carrying out subsection (b)(3), the Assistant Secretary for Preparedness and Response shall implement strategic initiatives or activities to address threats, including pandemic influenza and which may include a chemical, biological, radiological, or nuclear agent (including any such agent with a significant potential to become a pandemic), that pose a significant level of risk to public health and national security based on the characteristics of such threat. Such initiatives shall include activities to—

“(A) accelerate and support the advanced research, development, manufacturing capacity, procurement, and stockpiling of countermeasures, including initiatives under section 319L(c)(4)(F);

“(B) support the development and manufacturing of virus seeds, clinical trial lots, and stockpiles of novel virus strains; and

The approved amendment included in the enacted law is broader than the initially proposed amendment, but it appears to have a similar effect: strategic initiatives and “preparedness activities” may include exercises (133 STAT. 940) and “any such agent with a significant potential to become a pandemic” would likely include coronaviruses. Thus, the amendment, like several other amendments, could be interpreted to mean that the U.S. government was planning a falsified pandemic exercise as a “strategic initiative” or “preparedness activity.”

When taken together, the proposed amendment and the approved amendment in light of the soon-to-follow COVID-19 pandemic are again extremely significant indications that the COVID-19 pandemic may be a falsified exercise. Of course, if it is a falsified exercise, it is likely being used as a form of terrorism to coerce large populations into doing things they would otherwise not do.