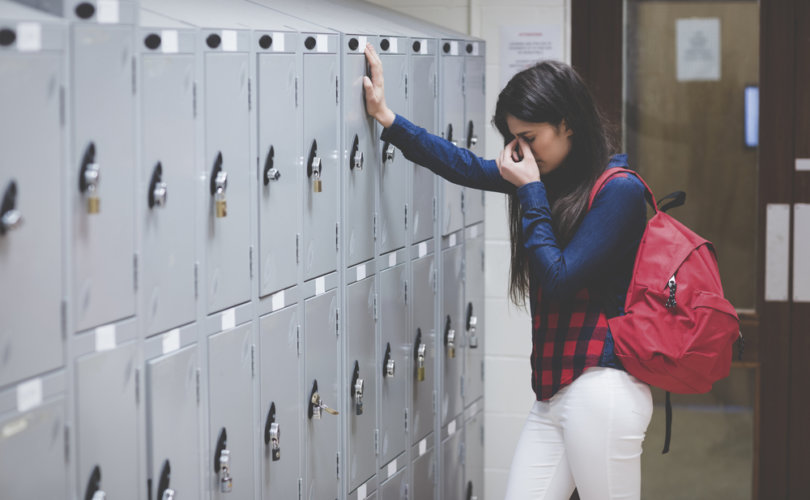 February 27, 2019 (LifeSiteNews) – Over and over again, we are told by LGBT activists that our schools must be transformed for the children. The massive changes to the curriculums, the transgender bathrooms, the revolutionary new ideologies—we are told that these are simply responses to the grassroots demands of parents and students, who have independently discovered that the way we understood the world for the entire history of Western civilization is, apparently, both hateful and inaccurate.

But nobody appears to have actually asked the students what they want. These policies are justified on the basis that the children need them, but in many instances, the precise opposite turns out to be the case. When one school in Alberta decided to bring in gender-neutral bathrooms back in 2017, many students avoided them because, as any idiot knows, boys and girls generally feel uncomfortable doing their business in a stall next to a member of the opposite sex. Lineups began to form outside the gender-specific bathrooms, and students trekked all the way across the school to avoid using the gender-neutral bathrooms.

“I find it uncomfortable. I have other things to do than boys, in there,” one female student told the media, referring to the changing of feminine hygiene products. “You can hear it.” One student eventually started a petition to demand more gender-specific bathrooms, and he was “overwhelmed” by students looking to sign on the first day. Eventually, he ran out of forms. “You don’t see [gender-neutral bathrooms] anywhere,” he noted. “You don’t see those in restaurants, you don’t see them in government buildings, you don’t see them anywhere, yet we throw them into our schools and assume it’s just fine. I don’t know whose idea this was but it wasn’t a very good one.” Parents, too, were angry that they hadn’t been consulted.

In the U.S., a teenage girl and her friends are suing their own high school over the new transgender bathroom policy. Alexis Lightcap, an African American student and 2018 graduate of the Boyertown Area High School in Pennsylvania, recently asked the U.S. Supreme Court to hear their student privacy lawsuit, and Alexis penned an editorial for USA Today explaining her decision to take her own school to court. “[The school] didn’t even bother to tell me or the other students that they changed school policy to allow students to choose their locker rooms and restrooms based not on their sex, but on their beliefs about their gender,” she wrote. Parents were not informed, either.

“The moment I walked into our girls’ restroom and found a boy standing there, I turned and fled,” Alexis went on. “The school’s surveillance video caught me running out. I tried to get the attention of the administrators to explain to them how uncomfortable—how scared—I felt sharing the girls’ restroom with a boy. They wouldn’t listen…Instead, our parents first learned of the policy when I found the boy in the girls’ restroom, and when others, like my classmates identified in the [law]suit as Joel Doe and Jack Jones, were changing clothes in the boys’ locker room and looked up to find a girl changing clothes beside them.”

Alexis Lightcap has been through the foster care system, and she knows something about standing up for herself. But she was essentially told that her discomfort, her privacy concerns, and her views meant nothing to anyone. As far as the authorities were concerned, girls like Alexis would just have to get over themselves and perhaps get purged of their “transphobia.” We live in a new world now, and transgender activists are setting the agenda. Nobody is allowed to get in their way: Not parents, not scared teenage girls, not awkward and uncomfortable high school boys.

The same thing is now happening in the United Kingdom. The Daily Mail reported earlier this month that “unisex toilets in schools are leaving girls ‘too afraid to use the loo over fears of period shaming, sexual harassment, and a lack of privacy.” Many girls are avoiding using the bathroom during school hours because of “cruel taunts from boys and a lack of privacy,” and a “growing number” of schools are ditching unisex bathrooms as “breeding ground[s] for bullying.” Some girls, they reported, even avoid drinking water while at school so they can avoid using the toilet. However, because unisex bathrooms are so fiercely demanded by trans activists, many parents and girls do not dare to speak up.

Some of the cultural battles we are being forced to fight are simply too stupid for words. Once again, in order to climb on board with transgender ideology, we are forced to suspend common sense and pretend that we do not know what we all know: Girls are often not comfortable doing girl things in the presence of boys, and vice versa. The excruciating awkwardness of gender relations throughout adolescence is difficult enough to navigate without wondering if the person you have a crush on is one stall over, hearing you relieve yourself. It would seem that transgender activists and their political lapdogs have become so enlightened that they have managed to forget the basic things about girls and boys that every generation prior to this one would have simply taken for granted.

Jonathon’s new podcast, The Van Maren Show, is dedicated to telling the stories of the pro-life and pro-family movement. In his latest episode, he interviews Walt Heyer who once lived as a “woman” until he realized it was all a lie. You can subscribe here, and listen to the episode below: