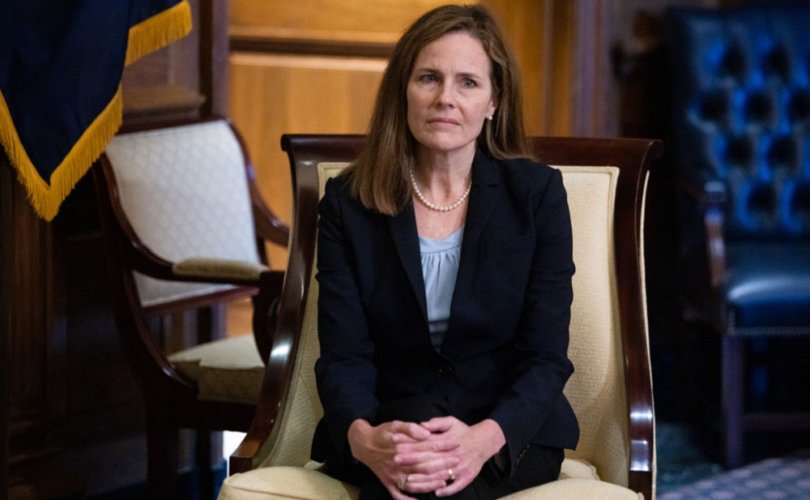 September 30, 2020 (LifeSiteNews) — A member of presidential candidate Joe Biden’s staff made a revealing statement on Twitter the other day. Arguing that Amy Coney Barrett reportedly believes that the husband should be the head of the household, someone pointed out that this is also part of the traditional faith of Jews and Muslims.

True, I’d heavily prefer views like that not to be elevated to SCOTUS, but unfortunately our current culture is still relatively intolerant. It will be a while before these types of beliefs are so taboo that they’re disqualifiers.

It is revealing because it encapsulates the doublethink of progressives about tolerance. She looks forward to the day when traditional religious views are “disqualifiers” for the office of Supreme Court justice — in other words, a time when society does not tolerate such views. But she describes society today, when they are tolerated, as too “intolerant.” We’re too intolerant today, so we need to become more intolerant in order to become tolerant. Is that the idea?

It was presumably because this sounds ridiculous (to put it mildly) to most people that Ms Rai deleted her Twitter account. Within the echo chamber of the liberal elite, however, it makes sense. A “tolerant society” is just their name for the society they want, where the things they don’t like are not tolerated; “intolerance” is just their name for what they oppose. They like these labels because they think of themselves as continuing the same fight as people a hundred years ago who argued that society should tolerate, for example, women with careers.

One problem with this is that even a century ago, some women did have careers. Women were at one time unable to gain certain professional qualifications, it is true, but you have to go a long way back for that: the first woman to gain a medical degree in the USA did so in 1849.  Even before then, businesswomen were, as they might have said at the time, “accepted in society.” The British businesswoman Eleanor Coade, for example, whose clients included aristocrats and even the king, died, wealthy and honored, in 1821. Sure, there were barriers to women having careers, but social attitudes clearly did not constitute an insuperable one. Most women of the 19th century sought security, fulfilment, and status in married life. And why shouldn’t they?

According to many feminists, they shouldn’t, because by doing so, they are failing to build the ideal society feminists want to see. The feminist icon Simone de Beauvoir wrote:

No woman should be authorized to stay at home and raise her children. Women should not have that choice, precisely because if there is such a choice, too many women will make that one.

The freedom to choose family life, like the freedom to adopt traditional religious values, is not something valued by feminism.

Nor do they seem very pleased by the example given by Amy Coney Barrett, of combining a successful career with a large family. The possibility that she should crown her career with the highest accolade of the legal profession, a seat on the Supreme Court, does not seem to fill them with joy. She has made the wrong choices.

The truth is that the ideology of much of the political and media elite is dressed up as being about tolerance and choice, but it is nothing of the kind. It is about fitting people into categories, of race, sex, and sexual orientation, and building their ideal society whether people like it or not. The people most hated by this elite are the ones who refuse to conform to type: Joseph Sciambra, who rejects gay stereotyping, or the conservative black Supreme Court justice, Clarence Thomas. The events that make them the angriest are electoral upsets when a whole population votes the wrong way, such as the Brexit referendum in the U.K. or Trump’s election as president in the USA. History, as President Obama liked to say, has an “arc,” and they are determined to make sure that it bends the way they want it to. If this involves disenfranchising the people on a range of issues, from abortion to same-sex “marriage,” then reserving those issues to be determined by a Supreme Court filled with people with correct, elite views, they have no problem with that.

Putting someone on the Court who didn’t go to Yale or Harvard is perhaps even more subversive than installing a woman with seven children.

Liberalism and feminism are not unusual, as political ideologies, in wanting to take society in a certain direction. Every political philosophy does so. What makes them unusual is the ruthlessness with which they are prepared to act, coupled with the claim that all they want to do is give people freedom. If we don’t have the freedom to believe the Catholic Faith or raise a family, then we don’t have freedom at all.