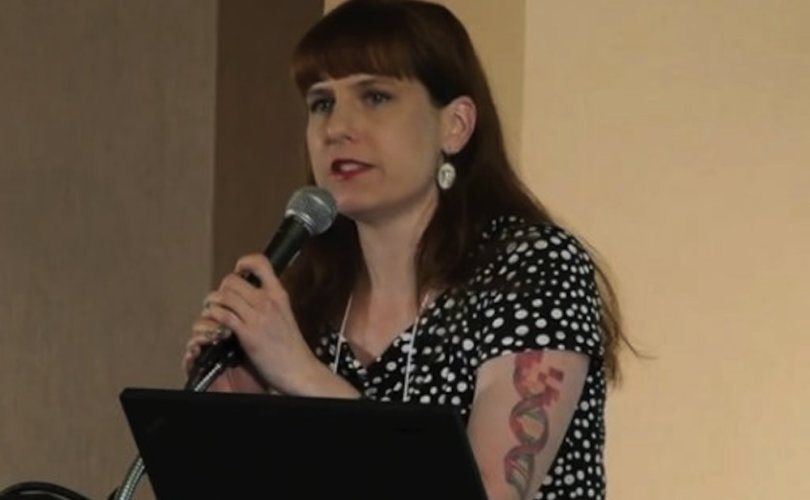 July 17, 2017 (LifeSiteNews) — A notoriously anti-Christian blogger has sneered at a Catholic apologist’s pride in his 11 children by comparing them to cats.

Amanda Marcotte, 40, slammed author and lecturer Patrick Madrid, 57, over Twitter when he responded to a comment stream inspired by the advice “Want to stop climate change? Have fewer children.” Madrid tweeted a photo of his family under the caption ‘“My wife & I have 11 healthy, happy, successful children. Which of them is ‘one of the worst things for the planet?’”

Marcotte responded in disgust: “Imagine if some woman was like,’ Here are my 11 cats.’ Would we think her sane? Praise her generosity? Nope! We would be disturbed.”

Dear @JillFilipovic, My wife & I have 11 healthy, happy, successful children. Which of them is “one of the worst things for the planet”? pic.twitter.com/Ee6MIhX52J

Two minutes later, Marcotte had another deep thought: “Even if she was like, ‘These are happy, healthy cats,’ we’d be like, ‘Nope, 11 cats is too many f****ing cats.’” When called out for comparing cats to people, Marcotte made a snap environmental assessment:

“Well, cats take up way less room than people. So, being conservative, having 11 kids is like having 22-33 cats.”

Marcotte made headlines in 2007 when she resigned as the ”blogmaster” for Jonathan Edwards’ presidential campaign. This move was triggered by sharp criticism of her foul-mouthed, anti-Christian polemics.

And in case you’re wondering, no, Marcotte doesn’t have children. As she wrote in 2014, “I don’t particularly like babies. They are loud and smelly and, above all other things, demanding. No matter how much free daycare you throw at women, babies are still time-sucking monsters with their constant neediness. No matter how flexible you make my work schedule, my entire life would be overturned by a baby. I like my life how it is, with my ability to do what I want when I want without having to arrange for a babysitter.”

On the subject of abortion, she wrote, “If my birth control fails, I am totally having an abortion. Given the choice between living my life how I please and having my body within my control and the fate of a lentil-sized, brainless embryo that has half a chance of dying on its own anyway, I choose me. Here’s another uncomfortable fact for anti-choicers: Just because a woman does want children doesn’t mean she wants them now. Maybe she’s still got some fun-having to do. Or maybe she has a couple already and, already well-educated about the smelly neediness of babies, feels done with having them. Either way, what she wants trumps the nonexistent desires of a mindless pre-person that is so small it can be removed in about two minutes during an outpatient procedure. Your cavities fight harder to stay in place.”

Having compared unborn babies to cavities, it is perhaps unsurprising that Marcotte could in all seriousness compare Patrick Madrid’s grown and growing children to cats.