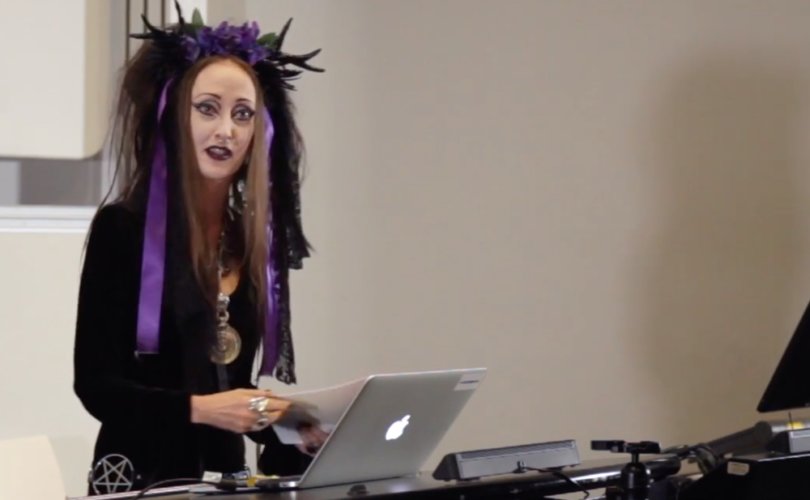 February 10, 2020 (LifeSiteNews) – On January 23, 2020, Bloomsbury Academic published a call to action for all those who care about “climate change.” The Ahuman Manifesto: Activism for the End of the Anthropocene by Patricia MacCormack, a professor of continental philosophy at Angelia Ruskin University, cuts to the chase and advocates for the ultimate solution to global warming: The end of the human race. For MacCormack, “Extinction Rebellion” has a whole different meaning.

MacCormack admits to being an “occultist magician.” She has actually given lectures—often in a get-up that is either supposed to be emulating a witch and bearing an eerie resemblance to the costumes we see frequently at Drag Queen Storytime—on the “invocation” or “convocation” of demons, which she says is an important feminist or queer practice. Invoking demons, she says, is not entirely risk-free, because “madness is as likely as ecstasy.” She says all of this entirely unironically.

MacCormack is not the sort of weak-kneed climate activist who believes that we should save the planet for our children. In fact, she doesn’t think there should be any children.

A researcher who has “published in the areas of continental philosophy…feminism, queer theory, posthuman theory, horror film, body modification, animal rights/abolitionism, cinesexuality and ethics,” MacCormack once argued that animals are equal to human beings. Now, she’s arguing that humans should get out of the way entirely.

The abstract for her book describes her thesis thusly: “Collapsing activism, artistic practice and affirmative ethics, while introducing some specifically modern phenomena like death cults, intersectional identify politics and capitalist enslavement of human and nonhuman organisms to the point of ‘zombiedom’, The Ahuman Manifesto navigates the ways in which we must compose the human differently, specifically beyond nihilism and post-and trans-humanism and outside human privilege. This is so that we can actively think and live viscerally, with connectivity (actual not virtual), and with passion and grace, toward a new world.”

All of that nonsense, roughly translated, is that the culmination of human progress should be human extinction. What MacCormack is trying to do is to present “the apocalypse as an optimistic beginning,” but for other species, who will do much better once we’re all dead, an eventuality she finds positively wonderful to consider. Her book, according to the Cambridge News, “argues that due to the damage done to other living creatures on Earth, we should start gradually phasing out reproduction.”

This is precisely why these climate fanatics pose far more danger to human civilization than climate change does: They are attempting to seize power by declaring a state of emergency, and once they have acquired power on those premises, they will use it to implement an actual state of emergency. We know what it looks like when the state uses its power to control the reproduction of millions: The forced sterilizations, the women who were kidnapped and had their pre-born children torn from their wombs, the trauma of truncated families and a culture in crisis. It was called the One Child Policy, and it only recently began to be phased out in China. It resulted in 336 million abortions and unmeasurable misery.

MacCormack, at least, does not try to sugar-coat her proposals. “I arrived at this idea from a couple of directions,” she told the Cambridge News. “I was introduced to philosophy due to my interest in feminism and queer theory, so reproductive rights [abortion] have long been an interest to me—this led me more to learn about animal rights, which is when I became a vegan. The basic premise of the book is that we’re in the age of the Anthropocene, humanity has caused mass problems and one of them is creating this hierarchal world where white, male, heterosexual and able-bodied people are succeeding, and people of different races, genders, sexualities and those with disabilities are struggling to get that.”

“The book also argues that we need to dismantle religion,” she went on, “and other overriding powers like the church of capitalism or the cult of self, as it makes people act upon enforced rules rather than respond thoughtfully to the situations in front of them.” Presumably, MacCormack believes her solution of human extinction is an example of responding thoughtfully to the facts in front of us, although she doesn’t explain how she’s going to get people to care about “climate change” by removing the primary motivation that is offered for caring about “climate change,” which is the preservation of the planet for people and their progeny. She admits this, noting that “Everyone’s okay with the ideas of the book until they’re told they’d have to act on it.”

Not so very long ago, the term “death cult” was considered to be a sinister term, not an aspirational description of the human race. MacCormack may be fringe for the moment, but she is the future of climate change activism: Actively hostile to the human race, and an advocate of “phasing out reproduction.” Mainstream radio programs regularly host long discussion with people who have decided not to have children to preserve the planet for the children, and MacCormack is just a bit ahead of the curve. Climate activists are utterly convinced of their own righteousness, and totally willing to use state power to force their solutions on all of us.

We should be listening to their proposed solutions very carefully.

Jonathon’s new podcast, The Van Maren Show, is dedicated to telling the stories of the pro-life and pro-family movement. In his latest episode, he interviews Dr. Christopher Yuan, a former drug addict who lived a promiscuous gay lifestyle. Dr. Yuan is now a professor at Moody Bible Institute and today, he discusses his powerful journey and conversion and what the LGBT agenda is to the US.You can subscribe here and listen to the episode below: