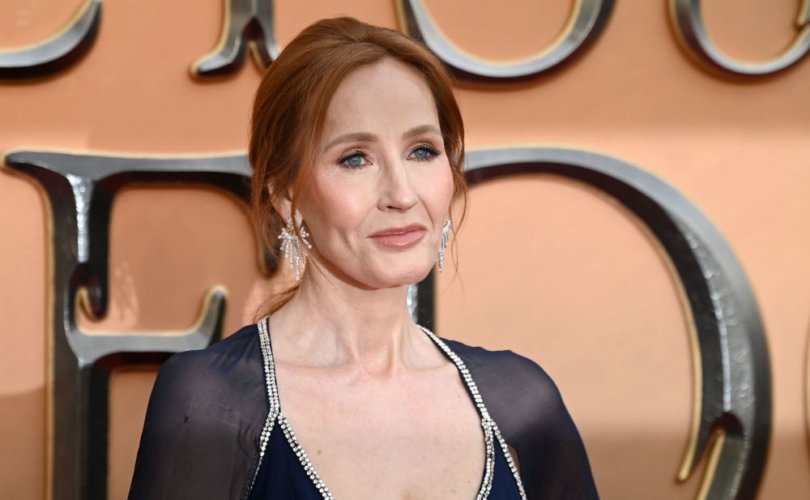 J.K. Rowling arrives at the ‘Fantastic Beasts: The Secret of Dumbledore’ world premiere at The Royal Festival Hall on March 29, 2022 in London, England. Photo by Stuart C. Wilson/Getty Images

(LifeSiteNews) —In a strange twist of fate, feminists have recently become conservatives’ “allies” (to borrow a term from the LGBT agenda) in the cultural war against transgender ideology.

Prominent feminist figures like Harry Potter author J.K. Rowling, who this week found herself in the puzzling spot of agreeing with staunch conservative anti-feminist commentator Matt Walsh on the transgender agenda, have nonetheless drawn the ire of the Left by asserting women’s rights against the predations of a new sexual ideology that steals women’s privacy in public restrooms, medals and scholarships on sports teams, and even safety in homeless shelters and women’s prisons.

Such women have been dubbed “TERFs,” or Trans-Exclusionary Radical Feminists, by the absurd idealogues to insist that mothers are “birthing people” and some women were born boys.

And your film did a good job exposing the incoherence of gender identity theory and some of the harms it’s done. Many institutions I used to admire have uncritically embraced this dogma, but I reserve my ire for them rather than shouting ‘coward’ at individual women.

RELATED: JK Rowling uncovers a key point in the transgender ideology debate that many are overlooking

But although feminists now rightly fight against men who identify as women stealing their opportunities, rights, and spaces, it was feminists themselves who laid the groundwork for the ideology they now combat, as Walsh and others have aptly pointed out.

In striving ostensibly to “empower” women, feminism has over time actually stripped away the power that uniquely belongs to womankind: the power to turn houses into homes, children into well-adjusted adults, and bare settlements into thriving civilizations.

Instead, feminists have convinced women that traditional feminine powers, spheres of influence, and pursuits were beneath us. That the most interesting, important, and empowering thing we could do would be to think, act, and talk like men.

We were told that we should enter male-dominated careers, shun family life, and swap feminine modesty and virtue for the same kind of self-centered pleasure seeking embodied by the worst of men.

And while they pushed “girl power” and insisted that “women are the future,” the not-so-subtle message of feminism has been that womanhood is not valuable or empowered unless it is as similar to manhood as possible.

But curiously enough, just as physics shows us the smallest distance between two points is no distance at all — a page folded back on itself  –– it turns out the most “empowered” woman is not actually a woman after all, if the ideology is allowed to progress to its logical conclusion.

With the emergence of transgender ideology, men have proved that anything women-who-act-like-men can do, they can do better.

RELATED: ‘Sick of being bullied into silence’: Female skateboarder rebels against males in women’s contests

By (ironically) idolizing male pursuits and strengths, feminists have ended up turning women into the second-class citizens they insist we once were. And by claiming that sexual promiscuity and infanticide liberates women from the bondage of family, feminists have actually shackled women to the very worst of men, the toxic patriarchy they claim to hate.

Feminists brought us some of the most virulent and culture-destroying changes our society has endured. They gave us abortion on demand and no-fault divorce. And by cementing in our culture the idea that men and women are the same, they paved the way for homosexual “marriage,” and yes, ultimately transgenderism.

I just hope that one day Rowling will stop and consider why she agrees with trans activists on every single issue except this one. They share the same fundamental worldview which is why feminism has failed to halt the advance of gender ideology. That might be worth thinking about

While conservatives should welcome any reinforcements we can get in the battle to save our culture against the bizarre radicalism of transgender ideology, it’s important to note that feminists will not win against transgenderism until they realize that their own ideology has spawned the very destructive force that now threatens to eliminate not just women’s individual freedom, but womanhood itself.

We can’t lose sight of the radical and serious differences between feminists and conservatives.

In the past weeks, feminists have bemoaned the historic overturning of Roe v. Wade, the abominable Supreme Court decision in 1973 that “liberated” women into slavery to hook-up culture, promiscuity, and abuse. In decrying the abolition of a nonsensical “right to abortion,” they rage that our culture has turned back the clock, and that we are returning society to what it was like 50 years ago.

And in this, they’re absolutely right.

As C.S. Lewis once wrote, “If you are on the wrong road, progress means doing an about-turn and walking back to the right road; and in that case the man who turns back soonest is the most progressive man.”

If we are to accept feminists within our ranks to combat transgenderism, we must get them to acknowledge that to be truly progressive, they must turn back on their own ideology and walk to the right road, or else their fight will be in vain.

Because as conservatives like Walsh note, the road the so-called TERFs started on many decades ago is the very one that has brought us to the immoral absurdity of transgenderism we are all now forced to combat.

1
Climate scientists baffled as to why Antarctica has not warmed in 70 years despite rising CO2 levels
2
Former NFL linebacker dies suddenly at 25, no cause of death given
3
Minnesota’s Democrat governor signs bill codifying abortion until birth
4
LGBT agenda full speed ahead thanks to Pope Francis’ recent remarks on homosexuality
5
Mark Houck details Planned Parenthood escort’s vulgar harassment of his son in Fox News interview
Subscribe to Daily Headlines »