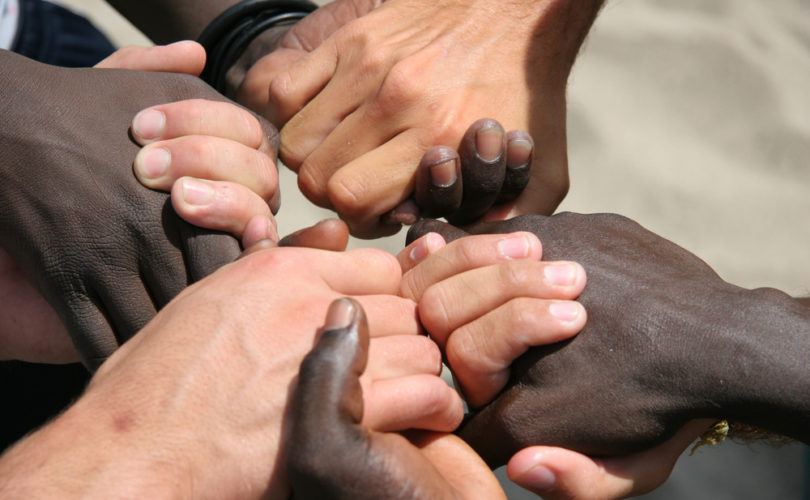 My heart is broken. Another young man, because of poor decisions, has died prematurely. And it never had to happen. What has followed has turned a tragic death into an absurd circus of rioting, racial rhetoric, and redirection.

Injustice happens every day. But do we even recognize what injustice actually is?

For many, not DVR’ing their favorite TV show is an injustice. For some, not matching their accessories with their outfit is a tragedy worth writing about. For others, having their favorite overpaid professional sports team lose a game is worthy of a bloody brawl to release the anguish.

There is real injustice all around us, but since we’ve grown to view anything that doesn’t go our way as such, we’ve lost sight of what it truly is.

The Ferguson decision, a local story made into a national media event, illuminates how radically different people choose to see reality. Mainstream media has been indignantly touting the “murder” of an “unarmed black teen”. Denouncers of “white privilege” have been maligning Officer Wilson and cops across the country for, well, the “privilege” they have to put themselves in perilous situations, risking their lives daily, and daring to defend themselves against an attacker. Oh, wait. That doesn’t sound very “privileged” to me.

Ferguson is a reminder that we cannot let the dishonest, the opportunists, and other evangelists of victimhood dictate the conversation. We all need keep calm and remember we’re all part of the human race. Breathe people. Breathe.

No one is helped by all of the statistics thrown out without context and without proper comparison. I’ve addressed the lack of outrage in the daily black-on-black crime that happens every day, swept away with apathetic silence from the same news sources and so-called “civil rights” groups that fixate on one death that is not even representative of racial injustice.

There is racial injustice, but not nearly to the extent that the leading race hucksters would like us to believe. When so many are crying wolf so many times, the real instances get lost in the noise (see the tragic video of this husband and father, Eric Garner, who was killed as a result of an NYC police officer’s chokehold).

But let’s not kid ourselves. It’s not 1965. And these black teenage boys are not dying in the act of marching for equality and justice. We have a culture that increasingly devalues life, and nowhere is that increase more evident than in urban America. Beautiful possibility is violently snuffed out daily. In 2012 the FBI reported that 5,538 black males were murdered, disproportionately, compared to 4,093 white males.  That’s 43% and 32%, respectively, of all U.S. homicides. In known single victim/offender relationships, 91% of black victims were killed by black offenders; 83.6% of white victims were killed by white offenders. The hyped white-on-black murder narrative becomes further dismantled by stats that show 7% of black murder victims are killed by whites, whereas 13.8% of white victims are killed by blacks.

And all the while, mainstream media, liberal politicians, and bubble-encased academic elites blame racism and inequality. The “HandsUp” crowd wants to declare an epidemic of police force brutality by pointing to the 410 deaths (justifiable homicides of any race, either gender) caused by cops in 2012. They ignore the most glaring injustice that is at the root of so much of the violence in the black community: fatherlessness. Michael Brown’s divorced parents, for instance, are depicted by liberal media as an intact family–not Leslie McSpadden the single mother mostly left to raise Michael on her own and Michael Brown Sr. the absent father, convicted felon (drug possession), and man who failed to pay child support. Women were never meant to play the role of both mother and father. And although male role models are important, nothing  replaces a present and involved father.

Regarding intact families and the correlation to anti-social behavior, the Journal of Research in Crime and Delinquency found that “adolescents in single-parent families are significantly more delinquent than their counterparts residing with two biological, married parents.”

One is hard pressed to find any mainstream media outlet suggest that a young black man’s behavior could possibly be responsible for a fatal outcome. Family disintegration couldn’t possibly be the reason communities are far more vulnerable to poorer educational outcomes, fewer economic opportunities, higher youth delinquency and violent crime rates. It’s much easier to use rhetoric that can fit on a bumper sticker or a t-shirt.

Speaking of t-shirts, Michael Brown’s grieving mother, Leslie McSpadden, allegedly saw violence as the solution to stopping a group of people from selling “Justice for Michael Brown” t-shirts. She and a reported group of 20-30 people, according to a police report, physically assaulted those selling the t-shirts.

Violence begets more violence. And it starts as early as the womb.

Which brings us to, yet another circus act in this liberal frenzy to foment racial division. Planned Parenthood–the nation’s largest abortion chain, leading racial profiler and killer of black lives–tweeted these words immediately after the Grand Jury decision was announced: “#Ferguson, #MikeBrown‘s death, and violence against people of color are an issue for all of us.” Uhhh, what? First of all, we’re all people of color, unless caucasians are transparent. Secondly, for decades the abortion industry has targeted the black community with massive campaigns of miseducation and abortion center placement.  The abortion rate among blacks is up to 5 times higher than that among whites, killing an estimated 363,705 black babies each year. And Planned Parenthood, with its yearly tally of over 327,000 abortions, is the leading killer of babies, of any color, in the nation.

Planned Parenthood’s founder, Margaret Sanger, called marriage the “most degenerative influence in the social order.” No, Ms. Sanger. It is the most powerful and positive influence of order. It is what stabilizes society and provides safer families, safer communities, and better outcomes for youth like Michael Brown whose decisions never need to put them at the end of a loaded gun.