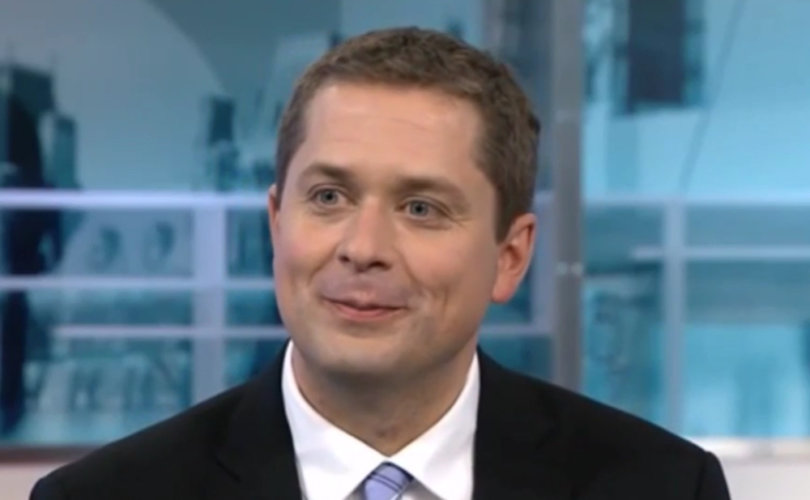 June 1, 2017 (LifeSiteNews) — With the election of the pro-life Catholic Andrew Scheer to the leadership of the Conservative Party of Canada — with a lot of help from social conservative voters — the reaction of the Liberal Party was utterly predictable. Before the weekend was out, two Liberal MPs had already been sent out to warn darkly that Scheer was the sort of Catholic that was, you know, Catholic. As in, his personal beliefs were very clearly in line with the faith he follows, as opposed to entirely separate, like the current prime minister. Pointing out this consistency, for some reason, is seen as a positive reflection on Monsieur Trudeau. Liberals demand that if their leaders are religious, they must also be liars and hypocrites.

This tack was expected, of course. Stephen Harper, who was not a social conservative and never claimed to be, was also relentlessly hounded by claims of a “hidden agenda” that existed only in the fertile imaginations of his critics. The Liberals like to hysterically warn people that the Conservatives are on the very verge of bringing up abortion or gay “marriage” again, when around 90 percent of the time it is the Liberals who are bringing these subjects up, presumably to terrify their aging feminist base and the attendees of Toronto Pride into even further feverish support for Justin Trudeau.

On the topic of the Pride Parade, I do find it interesting that while Trudeau and his Liberals — and I’m sure we’ll be seeing a lot more of this babble — are accusing Scheer (and by default, all Canadian Christians as well as pro-life Sikhs, Muslims, and Jews) of being radical while Trudeau himself is perfectly comfortable marching in an event where young children are regularly exposed to nude adult men. Trudeau himself is known to crop up at convenient locations around the country in various states of undress, so his comfort with such things is not surprising. But have the progressives really progressed into a situation where it is perfectly acceptable for young children, including little girls, to see men’s genitals as they stroll down the street buck naked? That seems far more radical to me than Scheer’s very boring beliefs about marriage.

While the media refuse to ask church-attending Conservative politicians any question beyond those concerning various aspects of social conservative belief — “Do you now or have you ever showed a lack of enthusiastic support for gay marriage?” — they neglect to ask the Liberals similar questions. After all, if Conservative politicians are going to be hammered for believing weird things like the idea that the baby Niki Ashton is expecting is a real baby, then perhaps they should ask Trudeau what he thinks about a Winnipeg library’s program where little children get read to by drag queens. Or maybe what he thinks about polyamory, a rising trend in many big cities here in Canada. Or what he thinks about the fact that our lack of abortion laws puts us in the dubious company of North Korea and China.

The Liberals like to pretend that Conservatives are simultaneously retrograde and radical, and that Canadians should fear their unwillingness to wildly embrace each new trend as it emerges. But it would be interesting to know what Canada’s Sikh population would think of these things. Or Canada’s Muslim population, or orthodox Jewish population, or the Hindu community. As John Ibbitson noted in his biography of Stephen Harper, if the sorts of things Liberals say about Christians were said about other religious communities, which hold the exact same views, they would rightly be called out as the bigots they are.

The reality is that social conservative views are actually far more common in Canada than the Liberals and the media want you to believe. Having spent much time in Canada’s immigrant communities, for example, I can say with confidence that on social issues, they do not subscribe to a single one of the Liberal philosophies — although to be fair, many of these ideas are so new perhaps not everyone has heard of them yet. (Gender is fluid, apparently. Who knew?) The media, the Red Tories, and the Liberals constantly perpetuate the idea that social conservatives must be silenced or the Conservatives will be ruined. That narrative, however, is not grounded in truth — it is simply grounded in their desire to shut up those who disagree with them and silence any voices that might dare dissent from their own radical agenda.

The Liberals will again try to smear Andrew Scheer and any other politician who still holds to any Christian belief as vile and bigoted people. That is the game that they play, ironically displaying their own bigotry rooted in the very accusations they make. Conservatives must be prepared for the assault — but not fall for the ruse.