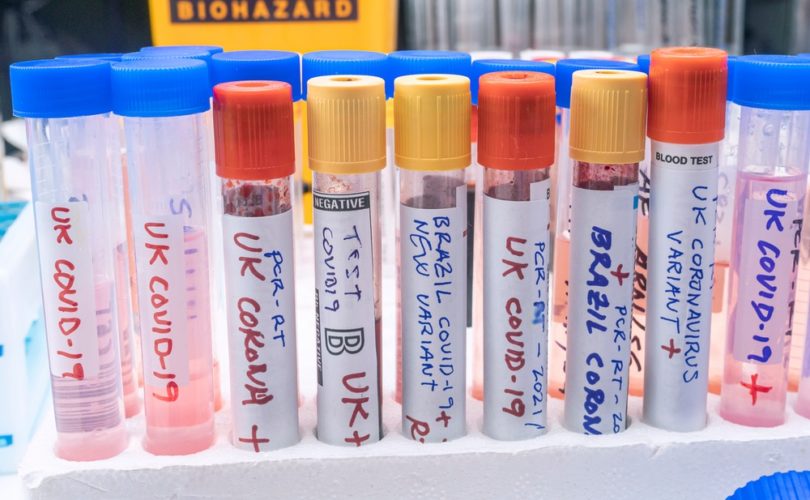 July 12, 2021 (LifeSiteNews) – It was predictable that soon after the mass COVID-19 vaccine campaign rolled out, if the shots began failing, the media would turn into scapegoats people who didn’t rush into line-ups for the fast-tracked, experimental pharmaceutical injections.

The latest COVID narrative is well underway. Thousands of fully vaccinated people are testing positive for the disease – so many, the government has stopped counting cases of “breakthrough COVID,” a blatant attempt to hide the problem of vaccine failure.

Rather, governments have directed attention to a Greek alphabet of new “variants” – supposedly deadlier and even more “contagious” mutations of the original Wuhan virus that causes the disease.

The media are dutifully providing an endless barrage of doomsday reportage, warning people that they are “more at risk than ever before” and that a “dangerous fall” lies ahead amidst clouds of inescapable Delta, Lambda, or Epsilon virus mutations. They have already begun further dividing the population already riven by division between those who see injecting children with experimental drugs and smothering their respiratory passages with masks as criminal and the millions who do not want lockdown ever to end. Medical Apartheid media have begun dehumanizing children and half of America’s  “unvaccinated” adult population, calling them “variant factories” and “incubators” of disease.

Unvaccinated people, including children, according to the latest COVID chapter, are harbors of infection that give birth to mutations. It is these virus mutants – not public health officials and vaccine investors – who impose masking, threaten whole countries with devastating lockdowns and continuous quarantines, and prevent the “return to normal.” If only everyone would get vaccinated – and receive booster shots perhaps twice a year or as necessary – to combat new variants, then there would finally be no COVID anywhere. Ever. Here are the top 5 reasons this narrative is a lie.

1. Virus variants of no concern

Michael Yeadon, former Vice President and Chief Scientist for Allergy & Respiratory research for COVID vaccine maker Pfizer, spent more than three decades in the vaccine industry before he retired from “the most senior research position” in his field. Variants, he says, are “irrelevant and being used as propaganda.”

In comments sent to LifeSiteNews, Yeadon said that while it’s true that small mutations occur in viruses routinely, these are tiny and insignificant changes that the immune system is fabulously equipped to combat.

“It’s true that when this virus, SARS-CoV-2, replicates inside our cells, it occasionally makes a ‘molecular typo’ error. Instead of a letter A, for example, we might see a letter U. These letters are instructions for what the next infected cell is instructed to manufacture,” Yeadon said. ‘Quite commonly there are several errors made.”

“But it’s very important to realize that there are a LOT of letters making up the genetic code for this virus, almost 30,000 letters. In turn this translates into almost 10,000 amino acids, the building blocks of all proteins. If a particular altered code is found often enough, it might get noticed as “a variant of interest”.

“So far, the answer is categorically NO.”

To give an idea as to how much (or how little, really) a change of 0.3% is, Yeadon suggested considering that the area of one palm of your hand is about 1% of your body surface area – so a visual of about one-third of one palm is the difference to consider.

“That’s less than the visual change brought about by turning a baseball cap around, or changing the shape of the lenses in your sunglasses, and expecting not to be recognized by your partner,” Yeadon said. “They won’t be fooled.”

“Please allow me to demonstrate that a difference of this minute amount definitely won’t fool your immune system either, into thinking ‘this is a new virus, not sure how I’ll cope’.”

Back in 2003, there was a previous Severe Acute Respiratory Syndrome coronavirus, or SARS. This new coronavirus is called SARS-CoV2 (or SARS coronavirus 2). SARS was never as widely spread out as the current virus, but plenty of people were infected, Yeadon explained. Several of these were followed up and invited to volunteer for a test on the immune cells in their blood.

“The main findings were that all volunteers retained solid immunity to SARS, 17 years after being infected. That’s great & is what to expect with the present virus: robust & durable immunity,” Yeadon said.

“But the second finding was astonishing to those who are unfamiliar with immunology. Every survivor of infection by SARS all those years ago also had cross-immunity to SARS-CoV-2. How could this possibly be? They’d never seen the new virus.”

“The answer is in the similarity of the two viruses: they’re around 78% identical, or 22% different. The way our immune systems recognize & remember respiratory viruses is to chop it into pieces & examine all the pieces.

If our immune systems have absolutely no difficulty recognizing two viruses which are 22% different, it’s literally impossible & absurd to pretend to the British people that a mere 0.3% mutation is a problem. It’s not a problem.”

Anyone immune to the current virus, whether by natural infection or from vaccination, is also immune to all the variants, according to Yeadon. “It’s not just me saying so.” He cites a study in which clinical immunologists tested the blood T-cells from volunteers and showed them all the variants which they had available, and they easily recognized and responded to them all.

“These mutations in SARS-CoV-2 are very common but they produce a lot of hot air. None of these variants differ enough to represent the slightest threat to immunity already hard won. That’s the big idea, but you’re not falling for it. So you definitely do not need a booster or variant vaccine. Don’t let anyone come near you with a syringe of such a thing. They’re not honest & they’re not your friend.

“Sure, that’s possible – and expected. How have we ended up with around 40 different viruses able to infect human respiratory tract? We think they each had nastier origins but over time, they’ve become more infectious but LESS dangerous,” commented Yeadon.

“Don’t let them take away your liberty on a set of immunological lies.”

Variants are a convenient cover for the shortcomings of Pfizer and the other fast-tracked COVID vaccines. And an easy way to scapegoat the unvaccinated.

The reality is that the case fatality rate for Delta variants according to a July 9 report on variants of concern in the U.K. is just 0.2% – that’s about the same as influenza.

Yet vaccine protection against this miniscule risk is not as great as it’s cracked up to be. The same British government variant report shows that 68% of the recent COVID deaths with the Delta “variant of concern” in the United Kingdom, for example, were among the vaccinated.  More than half are among the fully vaccinated. There were 10,834 cases of “breakthrough COVID” – that’s COVID infection in people who had already received two doses of COVID vaccine. 116 of them died.

More than 26,000 people had received one dose of vaccine tested positive for COVID with the Delta variant.

In America, the government stopped counting these “breakthrough COVID” cases when the numbers exceeded 10,000 and the deaths among the fully vaccinated from COVID-19 hit 535. How can public health say it is the unvaccinated spreading disease when it refuses to even count tens of thousands of fully and partially vaccinated people who are testing positive? Perhaps the tests are faulty?

Perhaps it’s a sign of the vaccine itself being dangerous, too. More than 9,000 deaths following vaccination have been reported by the U.S. government Vaccine Adverse Event Reporting System (VAERS) as of Friday.

The higher death rate in the vaccinated may be because there are inherent dangers to vaccinating people who have already been infected with the coronavirus. Or it may be due to Antibody-Dependent Enhancement – a well-documented phenomenon of previous failed attempts at coronavirus vaccines in which vaccinated lab animals became sick and died when they encountered the virus in the wild, because their immune system hyper-reacted – just the sort of severe COVID-19 reaction people fear.

If a “dangerous fall” lies ahead, as the media are warning, it may be for vaccinated people, since the vaccines they took are still in clinical trials and no one knows how their immune systems will respond when they meet wild flu and coronaviruses.

Will the government and media tell us how many cases of the coronavirus in the fall are among the vaccinated? Of course not. They conveniently stopped counting COVID-19 cases in the vaccinated because if they pretend they don’t know there is a problem, they don’t have to tell us about it. And “variants” – invisible and elusive and ever-changing – make a nice cover for inherent vaccine dangers.

No one seemed more delighted to announce the prospect of new virus variants than Pfizer Chief Financial Officer Frank D’Amelio speaking to the company’s investors this spring. During a virtual meeting hosted by Barclay’s multinational bank in March, D’Amelio told investors that the reports of emerging new virulent strains of the SARS coronavirus that had been reported across the globe this spring were a “significant opportunity” for the company.

“We've got the U.K. variant, the South Africa variant, the Brazilian variant. And so is there the possibility for more variants to emerge? I think the answer is clearly, there is,” he announced rather buoyantly.

A month earlier Pfizer CEO Albert Bourla told the 2021 Davos World Economic Forum that his company was already working on booster shots. Later he told shareholders that with variants he expected the company to “move from a pandemic into more of a normal type of vaccination business.”

More normal vaccination business is an endless revenue stream, not just a one (or two) and done deal. It’s the kind of business that creates billionaires and lets Bourla give himself a 17% raise and take home $21 million, in salary, bonuses, and stock in 2020.

Pfizer reported a “crazy good” first quarter this year, saying it expects to haul in $26 billion in sales for its COVID-19 vaccine this year, way above its earlier projection of just $15 billion. But why stop there?

Just as the media began buzzing about variants, Pfizer announced Friday that the time for its third booster shot has arrived. Immunity from its vaccine is already waning in the face of the variants it said (more on this later).

Of course it would be time for a new shot if you are a company whose real priority is profits as new COVID cases have stagnated and the number of people rolling up their sleeves has flat lined, too. Those who wanted both shots have had them. Time to offer your most trusting customers – and your income stream – a top-up.

It is unnerving that Twitter bot campaigns are now pretending grassroots support for draconian government measures like lockdowns and masking. Automated campaigns drumming up fear about the variants – in the same way the media are doing – to promote severe COVID measures for meagre threats is clear sign the variant scare campaign is not to be trusted.

This article was updated on July 13, 2021 to include more recent data from the British government.