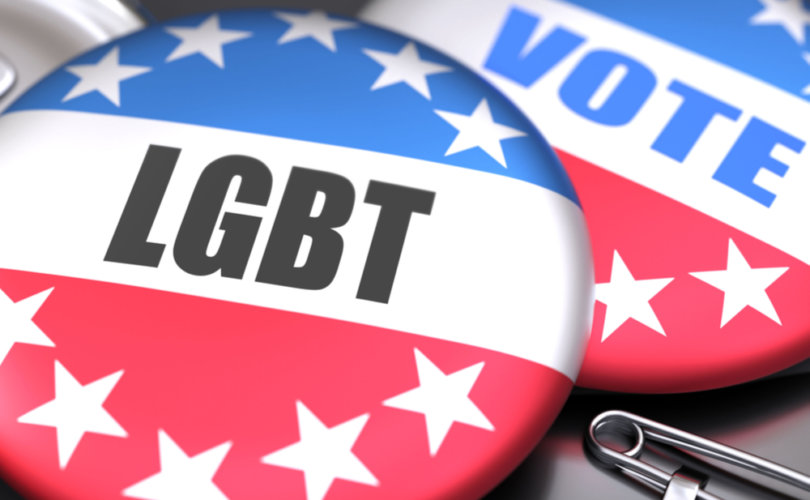 This is the fourth in an ongoing series on the problematic rise of LGBT influence in conservative and GOP circles. The first three commentaries can be found here, here, and here.

(LifeSiteNews) — All eyes are on Florida as it repeatedly proves to be the heart of conservative America, thanks to Gov. Ron DeSantis’ stalwart leadership.

There’s another good reason, however, to keep a watchful eye on Florida: It’s also ground zero for the rise of the “gay conservative” movement, comprised of LGBT conservatives and their allies, seeking to exercise increased power within the party.

At first glance they appear to easily belong, espousing patriotism, fiscal responsibility, limited government, and very often, Christian beliefs with great vigor. This is laudatory. Yet their lived-out full embrace of homosexuality and same-sex “marriage” is a dangerous influence currently gaining a foothold in conservative circles.

Conservatism is founded upon timeless principles. “Movement conservatism means ideas tethered to the permanent things, eternal principles that are 100 times more important than any political party or its fortunes in any election cycle,” explained Kevin Roberts, the new President of the Heritage Foundation, in a just-published interview with Ethics & Public Policy Center’s Henry Olsen. It recognizes “the existence of an enduring moral order that all of us have imprinted on our souls, or you know, for our atheist friends, on our nature.”

Homosexuality, transgenderism, and same-sex “marriage” are at odds with those timeless principles, rooted in eternity.

If you support same-sex “marriage,” “it means you’re not a movement conservative,” said Roberts, a transplant from Texas who has been described as a “Cowboy Catholic.”

“Same-sex marriage contravenes our understanding of an enduring moral order. Which is at the root of being a movement conservative,” he continued. “It doesn’t mean you’re a bad person, it just means it’s an opportunity for people like us at Heritage to persuade you otherwise.”

Roberts could’ve very easily been commenting on recent events in Florida. And nowadays, with 55% of Republicans expressing support for same-sex marriage, there are plenty of people within the party who definitely need to be persuaded otherwise.

That was just the beginning of a steady stream of conservatives rolling out the red carpet to increased LGBT influence in the Sunshine State.

A coalition without a core

The National Conservatism II Conference in Orlando brought together some of conservatism’s biggest names and thought leaders, and placed alongside of them three influential gay men, two of whom are in same-sex “marriages”: Billionaire PayPal founder Peter Thiel; Dave Rubin, host of the Rubin Report; and Douglas Murray, popular author of The Madness of Crowds: Gender, Race and Identity.

Presumably in the name of building a “bigger Republican tent” which would draw gay voters away from the Democratic Party, none of these men were publicly challenged concerning their active homosexual lives and “marriages.” The big names and thought leaders said nothing, giving the appearance that they now consider homosexuality to be normal and acceptable.

“I don’t recall so much as a ‘boo’ when these new friends dissented from popular conservative views,” wrote The American Conservative’s David Brog.

Of course there is good reason for Republicans to enlarge the party.

“The urgency to create such an unlikely coalition arises from the threat of a powerful worldview that is in the process of taking political power using the Democratic Party as its vehicle,” wrote Craig A. Carter in a commentary titled “Coalition without a core,” critical of the NatCon II gathering. “Political power is within its grasp because of its massive cultural dominance in universities, public schools, Hollywood, Big Tech, multinational corporations, and so forth.”

“How much value do they bring to the conservative movement?” asked Carter concerning liberal newcomers. “They have no metaphysics, no natural law, no divine revelation, no absolute truth — just procedural liberalism for carving out the space for individuals to ‘self-actualize.’”

Interestingly, Yoram Hazony, head of the Burke Institute and chief proponent of NatCon II, chose the same term, “carve out,” to justify the absence of conflict with gays at the conference.

“We discussed a possible framework for working together, which would: (1) Allow religion to determine public life in places where there is a Christian majority, (2) but with ‘carve-outs’ for dissenting minorities,” he told LifeSiteNews.

Yet: “This was always a recipe for the dissolution of tradition, social order, and peace,” warned Carter in his commentary.

Conservatives who sacrifice timeless principles simply by being silent in order to expand the Republican Party are playing with fire.

NatCon II speaker Dave Rubin shared on Twitter that he had just pulled his operation out of California and had arrived in Florida where he will now be based.

Grenell, formerly a Fox News contributor, will play a key role in offering security and international analysis for the network, now the fourth highest-rated cable news channel in the U.S. with a larger streaming service than Fox Nation and CNN+.

“Ric Grenell is a master of politics, media, and government, and we believe our viewers will gain great insight from his broad experience and public service,” said Ruddy.

Yet because of Grenell’s very public homosexual life, viewers will also be further inured to the notion that homosexuality is normal. Photos of Grenell and his partner, Matt Lashey, with President Trump and Vice President Pence have already gone a long way to accomplish that.

Earlier this year, Newsmax interviewed gay conservative drag queen “Lady MAGA” after he was fired — canceled — by Delta Airlines, presumably because of his conservative activism displayed on his social media accounts.

See you in a few on @newsmax 🇺🇸 pic.twitter.com/pWSM5bSWwm

While Newsmax has interviewed “Lady MAGA,” the conservative-friendly news organization did not pick up on another story around the same time of former transsexual drag queen Kevin Whitt, who was similarly unfairly fired by his employer, the Texas GOP, after Jan. 6.

Other gay conservative influencers have taken up residence in Florida.

Brian Clowdus who gained some prominence during the 2020 presidential campaign as a gay MAGA supporter, moved to Florida after the election and is now mounting his own campaign as a Republican to represent District 6 in Florida’s House. He was the first state candidate to be endorsed by Floridian Roger Stone, who has strong ties to Donald Trump.

Clowdus is an accomplished stage producer-director who last summer mounted a production of Oklahoma!, with Project Veritas’ James O’Keefe cast in the lead role of Curly.

“I joined the MAGA movement [because] it was built underneath the tent of inclusion making the GOP the most diverse it has ever been. If you believe otherwise, you are not part of this movement & you do not represent the forward motion we are creating,” warned Clowdus in a tweet in March.

I joined the MAGA movement bc it was built underneath the tent of inclusion making the GOP the most diverse it has ever been. If you believe otherwise, you are not part of this movement & you do not represent the forward motion we are creating. We lead from love & acceptance.

Please remember, dear reader, that “loving” and “accepting” LGBT persons does not require accepting LGBT and other “woke” ideologies they may bring with them.

In his interview, Heritage President Roberts said there are “conservatives who are not movement conservatives because they are weak and wrong on the social issues. Marriage, transgender stuff.”

And there are others who lack “what I would call a fire in the belly for fighting,” said Roberts.

It’s that “fire in the belly” for timeless, eternal, immutable principles that will attract all who yearn for truth, including gays and lesbians who may well be drawn to live chaste lives.