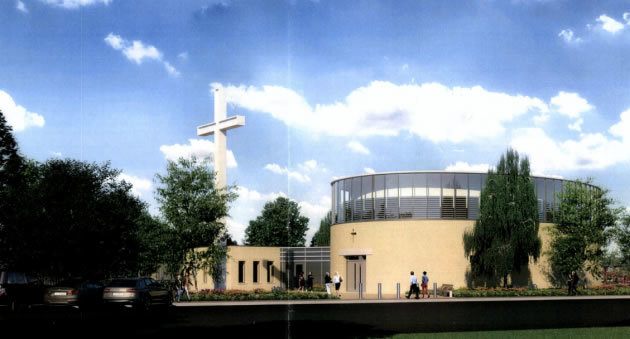 “Every tree that does not bear good fruit is cut down and thrown into the fire.” – Mt 7:19

(LifeSiteNews) — One of Ireland’s biggest churches is currently being demolished and with it any reason to believe the modernist faith preached in most Irish parishes will survive the coming decades.

The Church of the Annunciation in north Dublin was built in the 1960s. Its brutalist architecture was typical of the age, with countless such churches and civic buildings staining the Irish landscape for generations since.

The otherwise orthodox Archbishop John Charles McQuaid commissioned the 3,500-seat church in 1962, opening it in 1967, at a time when weekly Mass attendance was over 90% in an overwhelmingly Catholic Ireland.

No doubt his intentions were good, but Archbishop McQuaid and others must have been unaware of the heresies that would steadily spread through ecclesiastical and lay circles alike, leaving his new building with a shelf life of little more than 50 years:

It seems clear now that the creeping liturgical, doctrinal and moral laxities of the late 1960s, coupled with the nascent sexual revolution, has set in train the self-destruction of modernism itself, with most of the laity slowly but surely turning their backs on what the majority of parishes offer.

To this day, however, many clergy still propagate the very modernist ideas and practices that are hastening the end of their sterile reign, an even sadder reality considering the countless souls at stake.

There has been much reporting about the clerical sex abuse of children and the cover-ups in Ireland, with authorities seldom admitting that such outrageous wrongs can only take place in an atmosphere of moral laxity, where weak, sentimental bishops cover for predator priests, ignoring the all-too-voiceless children who were abused and sidelined.

Horrendous as it was, the abuse scandals were only a catalyst for the continued decline of the Catholic faith in Ireland. The falloff had begun long before the extent of the abuse became clear with the Ferns Report in 2005.

While an exact picture today is hard to come by because the Sunday obligation has been lifted for more than a year, the overall reality is indisputable: Most churches will be surplus to requirements within 20 years.

The fact the demolished Church of the Annunciation will be replaced by a much smaller but no less unseemly chapel (main photo) would indicate that most church leaders have learned little as to what has gone wrong.

The disinterest in building a beautiful replacement church to glorify God, where reverent liturgies could raise souls to heaven, says as much about the Dublin parish’s lack of zeal as it does about their indifference towards Tradition.

There is, mercifully, fruit in those parishes and religious orders where orthodoxy is promoted, where the sexual revolution is roundly rejected and children fill the pews, and where vocations to the priesthood and religious life are still prayed for and received.

Such churches may be few in Ireland, but they are very much the future and will once again make up the backbone of Catholicism on the island.

The coming synod, as in most countries, is doomed to fail if clergy are unwilling to embrace the full-blooded Catholicism of the saints. Thankfully, there are many who hold and teach the true faith.

It is, after all, a redeemable situation in Ireland, Europe and the West if new saints play their part in God’s plan to rebuild His Church.

So while demolition jobs might continue in Ireland, those with supernatural faith know that God is rebuilding something much better.