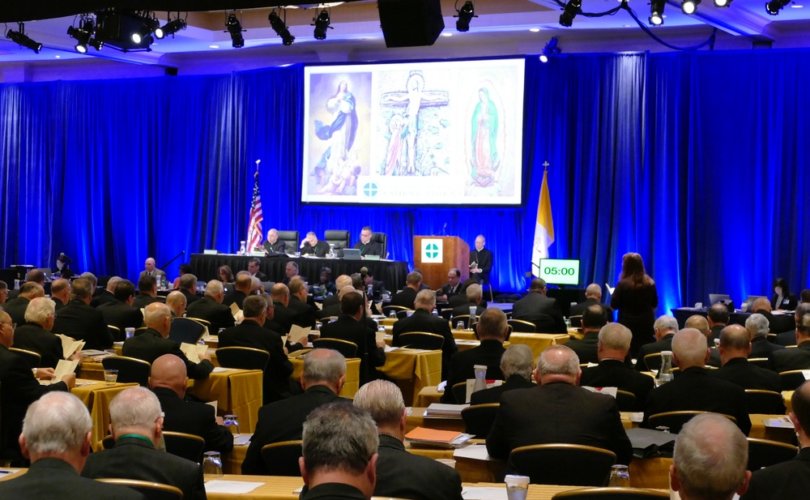 The United States Conference of Catholic Bishops met in Baltimore on November 12, 2018 to discuss the ongoing sexual abuse crisis in the Church.Lisa Bourne / LifeSiteNews

January 2, 2019 (LifeSiteNews) — For a long time, the pope and the bishops were seen as “men apart,” occupying a lofty sphere that no layman could dare enter, with a special standing that blocked all criticism. This attitude has a reasonable foundation: We are dealing here with the successors of the apostles, with those who represent Christ the Good Shepherd on earth, teaching, ruling, and sanctifying in His name and by His authority.

However, it is an attitude that has its limits, too, when we remember that we are dealing not with Christ Himself, nor with the irreplaceable Apostles who sit on the 12 thrones, but with fallen men who can either live up to their high calling or fail badly in it.

In past ages, sinful prelates often lived “high off the hog” at the expense of the laity, and there was little enough that could be done to expose them, influence them, or shame them. In like manner, holy and courageous prelates might be praised locally, and perhaps their reputation would eventually spread (especially after their death, when a cultus would begin for the holiest of them all), but again, there was a practical limit on the reach of their good influence.

Today, however, the situation has changed dramatically, thanks to the media. It is no longer possible for a bishop to do good quietly or to do evil quietly. Already this was true in the age of newspapers and magazines, but the internet has exponentially intensified the bright spotlight shining on the public actions and statements of any bishop. He cannot hide. He must make a choice: be boldly good; be boldly evil; or look indifferent, disengaged, cowardly.

As many downsides as it undoubtedly has, the internet has become, in a sort of clumsy way, a winnowing fork and a threshing floor (cf. Mt 3:12). True, the laity still do not have, and will never have, any direct authority in regard to the hierarchy. But moral authority they do have, wielding the weapons of exposure, protest, and withdrawal of support. By continually calling on their shepherds to give good example, to remain faithful to the teaching of Christ and His Church (not the latest fashionable modernized doctrine from the Vatican), to deal promptly with evils, to acknowledge and repent of evils, and to promote “all that is true, noble, right, pure, lovely, admirable, excellent, praiseworthy” (cf. Phil 4:8).

The internet has made it common knowledge that (as a friend put it to me) billions of dollars in damages have been paid out for the crimes of certain sick members of the clergy. Was this the purpose for which you earmarked your diocesan contributions? What about your forefathers, who toiled for their bread, saved it up, and gave it generously to their local church for the love of God? Did they want it to be used for the building of beautiful churches and the upkeep of worthy clergy, or did they think that lawyers’ fees, professional PR agents, payoffs, and huge court settlements for victims were just as good a purpose?

As Fr. John Zuhlsdorf succinctly stated: “It is time to cut off all funds and channel them only to trustworthy traditional causes.” Today’s informed laity should not give a red cent to anything run by, sponsored by, or recommended by any diocese or the USCCB as a whole until bishops start acting like St. Ambrose, St. Athanasius, and St. John Fisher, instead of hacks for the Democratic Party.

At present, sadly, this outcome does not seem too likely. In November, the U.S. bishops made themselves a spectacle by birthing, on center stage before the eyes of the world, a particularly noxious fruit of hyper-papalism: the spineless abandonment of genuine episcopal responsibility. “In the prophets of Jerusalem also I have seen a horrible thing: they commit adultery, and walk in lies; and they strengthen the hands of evildoers, so that none doth return from his wickedness: they are all of them become unto me as Sodom, and the inhabitants thereof as Gomorrah” (Jer 23:14).

As the pope and bishops dither and show their utter incapacity (or even unwillingness) to deal with the crisis they themselves have caused, and as the approaching February meeting promises to be “more of the same,” the voice of the faithful continues to rise up, like the rolling of thunder as the storm draws nearer. The hammer blows of lawsuits, investigations, document raids, and criminal sentences will fall more and more relentlessly on the shoulders of the perpetrators, collaborators, and connivers.

Meanwhile, true heroes of the Faith, like Bishop Joseph Strickland, will rise up and be distinguished for their counterwitness. May the Lord send us many more in our hour of need.