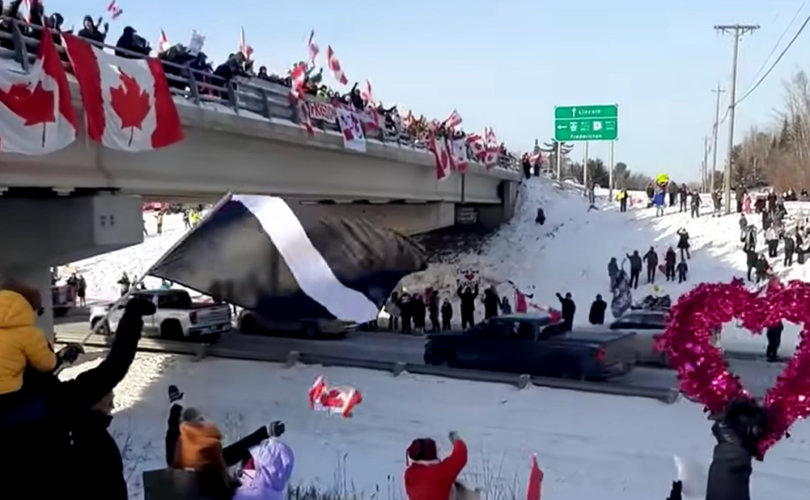 Doug Ford, the Ontario Premier who has for two years frequently violated Canada’s Charter of Rights and Freedoms, the Bill of Rights, the Nuremberg Code, the sacred relationship between a doctor and his patients, and betrayed most Ontarians who believed his fake election promises and voted for him, has now also become a thief. He is now essentially attempting to steal the millions of dollars that thousands donated to the Freedom Convoy 2022 GiveSendGo fundraiser.

A claimed-to-be-Conservative, Ford has often done the bidding of Liberal Party Canadian dictator Justin Trudeau. Today he convinced an unethical, cooperative judge to try to freeze the truckers’ funds in the new crowdfunder that was set up to replace the millions donated and also denied to them from the previous GoFundMe crowdfunder.

This is certain to elevate the anger of many millions of Canadians and those who value freedom in other nations who have expressed overwhelming, massive support for the truckers’ efforts. Convoy 2022’s goal is to free Canadians from the ongoing COVID lawlessness and mandates oppression by their governments. The truckers have spectacularly raised the hopes of all those not hypnotized by Canada’s uniformly deceitful media/political/health establishment who have caused enormous harm to the nation and its citizens in the name of supposed COVID “safety.”

Ford has caused catastrophic economic harm and loss of life and health in Ontario. The large majority who died from COVID in Ontario could have been saved but for the criminal prohibition of highly effective, safe, early treatments by the health ministry and medical bodies. This has been done to try to convince the public that the COVID “vaccines” have been the only solution to the pandemic. We now know that this was a great lie, especially promoted by the pharmaceutical giants who have been making obscene, multi-billion-dollar profits on these injections that have proven to be by far the most dangerous injections in history.

As well, and most sickening, all the “vaccine” producers have been protected from lawsuits against the large number of deaths and serious injuries that have resulted from their jabs. That leaves all victims without any financial recourse for the suffering and loss of kin caused by the jabs.

The inspiring video below reveals what all the legacy media refuse to show the public about Convoy 2022. This, and many more videos produced by a rapidly growing alternative news media, completely contradicts the Ford, Trudeau and legacy media propaganda:

Hundreds of thousands have been losing their jobs, education, businesses, finances, emotional stability, and freedoms because of the tyrannical mandates.  They do not allow for reasonable exceptions, even for those who are almost certain to be harmed by them because of prior health conditions or severe reactions experienced from a first or second jab. And there have been no exceptions permitted for those who could not possibly benefit from the injections because they are in a category that has a zero or very minimal risk of serious COVID infection or they are COVID-recovered and therefore immune.

Canada’s long tradition of religious or conscience objections has also been illegally smashed by Trudeau and the provincial premiers. All the Covid jabs are tainted to some degree by abortion which millions of Canadians deeply oppose for religious and ethical reasons.The truckers, many of whom are vaccinated because their jobs mandated this, have pleaded for the complete removal of all the mandates – which have consistently, in one nation after another, not led to an end of COVID infections, extended the false “pandemic” far beyond its natural timeline and only made everything worse. They have especially expressed sorrow for the harm that children have been experiencing from useless, criminal mask mandates and severe injuries, including death, from the jabs, which are especially harmful to children. Children’s immune systems are more prone to harm from faulty experimental vaccines. Also, they cannot possibly benefit from the jabs since they are in no danger from COVID, except for the tiny percentage with serious co-morbidities.

Watch the alleged criminal truckers and their supporters below in another inspiring video.

Trudeau, the mayor of Ottawa, its police chief (who not long ago was very positive about the truckers), Ford, and all the media have joined in an ongoing stream of defamatory, false accusations against the truckers. We suspect they are doing this assuming that most of the public has been getting all of their information only from the controlled mainstream media – all of whom receive huge bribes, er, funding from the Trudeau government and are therefore not willing to risk loss of those funds by telling the truth about the truckers, COVID and the mandates.

There are far more Canadians following alternative media now. That will make all the difference to the final outcome of Convoy 2022’s efforts against the shameful, very un-Canadian, authoritarian behavior by governments and their hired stooges against this popular movement.

The videos included in this article are a tiny fraction of many more exposing the cruel lies of the Canadian political/media class working to ensure that nothing is permitted to interfere with the Great Reset nightmare that is being prepared for Canada by the World Economic Forum New World Order. Its plans are dependent on every person on the planet being compelled to be vaccinated and then given a mandated vaccine passport that will only be valid as long as every future booster is taken.

And see another “terrorist” here:

This little girl broke my heart. What kind of damage have we done to our kids 🙏❤️ pic.twitter.com/W3cxHuG9P9

We must all stand with the truckers, who have been making substantial personal sacrifices, not only for themselves and all Canadians, but also for the whole world, as they have stated in some of their refreshingly unique press conferences. See below their 14-minute Freedom Convoy ADDRESS TO THE NATION – Feb.6, 2022 “State of Emergency Update,” which includes comments from the renowned Drs. Paul Alexander and Roger Hodkinson and two Convoy leaders.

The leadership of the Convoy 2022 movement understands the end goals of the COVID lawlessness. That is why they believe this is our last stand that cannot be lost. They are personally risking everything because they understand that if we lose this battle, all will eventually be lost anyway for everyone.

They are not the criminals or the lawless ones. Those who are accusing and trying to crush them are the ones endangering the safety and freedoms of Canadians, breaking a multitude of laws and responsible for thousands of deaths and injuries that could have been prevented.

The truckers are a modern, working-class type of white knights, who have left their jobs, homes and security to defend the kingdom of righteousness and lawful order. Many of them are also men and women of faith in God.

Justin Trudeau is the real hater, racist, and divider…not the truck drivers

People behind COVID scam said to be ‘deeply cruel, evil, and psychotic people’