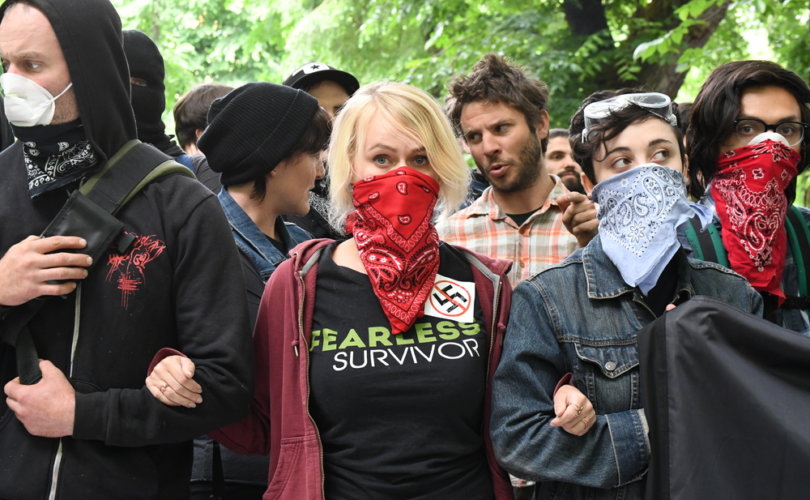 Writing in the The Washington Post, Marc A. Thiessen described how a group of black-clad “anti-fascists” attacked several people at a peaceful “No Marxism in America” rally last month in Berkeley, California. The rally’s organizer, Amber Cummings, a self-described “transsexual female who embraces diversity,” had specifically discouraged white supremacists from attending. Nevertheless, Antifa turned up to attack the anti-Marxists with boots, sticks, pepper spray, and homemade shields with “No Hate” scrawled on them.

Thiessen observed that Antifa’s violent actions showed that their definition of “fascist” includes not just “neo-Nazis” but anyone who opposes their “totalitarian worldview.” He cited an interview with Mark Bray, the newly notorious Antifa advocate/Dartmouth University lecturer. Bray had described contemporary anti-fascists as “predominantly communists, socialists and anarchists” who think physical violence is “both ethically justifiable and strategically effective”.

“In other words,” wrote Thiessen, “no different than neo-Nazis.”

By attacking peaceful anti-Marxist demonstrators in Berkeley, Antifa have shown themselves to be, in Thiessen’s opinion “violent advocates” of totalitarian communism.

Thiessen’s mother and maternal grandfather both fought in the Warsaw Uprising of 1944 as members of the Polish Home Army. Thiessen’s grandfather was killed by the Nazis’ German troops; Thiessen’s mother survived to witness the Stalinist terror. Since the United States defeated both Nazism and Communism, said Thiessen, Americans should be “repulsed” when Americans fly the flag of either “murderous ideology.”

Most Americans are disgusted by those who valorize Nazism, and rightly so. Unfortunately, Communism — whose victim count is even higher — is too often given a pass. Thiessen argued that it is the responsibility of both the left and the right to police their movements. Conservatives must condemn the racism of the alt-right, and liberals must distance themselves from Antifa.

At Thiessen’s instigation, Democrat Nancy Pelosi issued a condemnation of  the Antifa violence in Berkeley.

“Good for her,” Thiessen wrote. “So why haven’t more leading Democrats done the same? After Charlottesville, the media rightly demanded that President Trump and all Republicans condemn the neo-Nazis and the KKK. So where are the calls for Democrats to condemn Antifa — and the brutal public condemnation for those who fail to do so?”

The violent “anti-fascists” at Berkeley also menaced Ashton Whitty, a member of the Berkeley College Republicans, and her friends.

A hooded activist growled, “We’re real hungry for supremacists and there’s more of us.”

“This entire day made me realize how dangerous it is to be conservative in Berkeley,” Whitty told Campus Reform reporters. “Because the reality is, it's not about just Antifa or BAMN nesting with us or taking pictures of us to mess with us … it’s no longer a game for them.”

“If you are publically conservative, they will dox you, they will take pictures of you on campus. They will know who you are. If they find you, and have the chance to, they will probably kill you,” she warned.

The first group described as Antifa was the Antifaschistische Aktion formed July 10, 1932, by the Communist Party of Germany. They had the support of Comintern, an international communist organization that hoped to create an international Soviet republic. Comintern was dissolved by Joseph Stalin in 1943.

The more immediate ancestor of contemporary Antifa groups was “Anti-Racist Action,” which was active in Canada and the U.S. in the 1990s. Their goal was to find and disrupt gatherings of neo-Nazis and beat them up. Many of the ARA activists were white skinheads wearing “punk” outfits, rendering them visually indistinguishable from their targets.

Today, Antifa recruits through small meetings and on social media. Many dress in black and wear masks so they cannot be identified by police. According to Brian Levin, the director of the Center for the Study of Hate and Extremism at California State University, San Bernardino, Antifa activists are working to become more prominent in progressive movements.

“What they’re trying to do now is not only become prominent through violence at these high-profile rallies but also to reach out through small meetings and through social networking to cultivate disenfranchised progressives who heretofore were peaceful,” Levin told CNN.