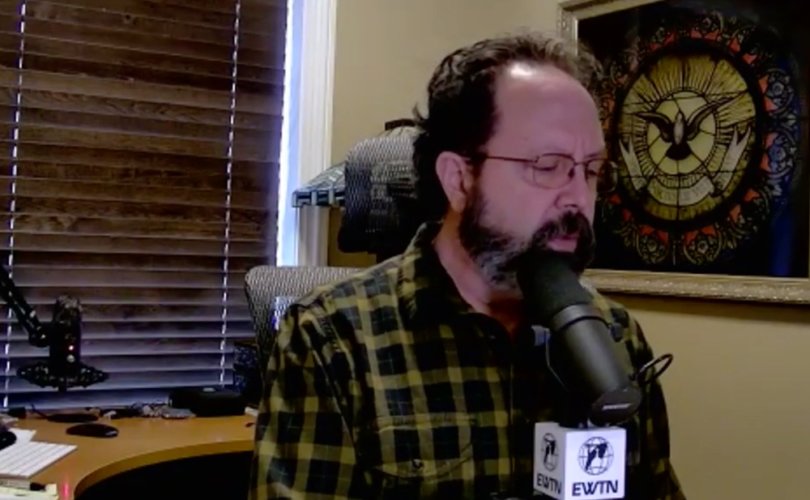 April 9, 2020 (LifeSiteNews) – Dan Burke, the former president of EWTN News, has recently come out of the intensive care unit where he struggled with the coronavirus infection. He is now speaking about his experience and about his spiritual reflections with regard to this current crisis. He calls the coronavirus a “part of a chastisement due to our own irreverence and sins.” He calls the removal of the Sacraments from us “right and just,” since we have breathed the air of “sacrilege” and “irreverence,” especially at Mass.

Mentioning Bishop Athanasius Schneider, Burke points to Communion in the hand as the key problem  which is, every time it takes place, a “sacrilege.”

Speaking with his wife Stephanie on their EWTN Divine Intimacy Radio, Dan Burke says that having this virus was the “blackest hole I was ever through” in his life and that it was “horrifying.” Both he and his wife call his recovery a “miracle” and attribute it to the prayers of so many people in the world.

In light of their own personal suffering – Stephanie Burke also had the virus, though her case was not as serious – the couple came to the conclusion that this crisis is God's “call to holiness.”

Stephanie Burke reflects that, for example, we don't even know how to keep Sunday holy. “As a culture,” she states, “I don't know that we understand what that is, that is part of why we are in this mess, that is part of this grand chastisement for irreverence and for not keeping the Commandments of Our Lord.”

Adding his own reflection, Burke states that “not only should we keep the Sabbath holy, but we should be striving for a deeper holiness.”

“I came out of surviving COVID-19,” he adds, “eight out of ten people who experience what I experienced die.”

About the coronavirus, Burke says: “This is a call to be more holy, not less; more devoted, not less; more reverent, not less; more self-giving, not less.” And he warns those who do not strive for that holiness: “If you are doing less, you are likely to be participating in another wave, or responsible for, another wave of chastisement which may be even worse.”

“This is a call to holiness,” he repeats.

When discussing the question as to what we Catholics should do in thanksgiving to God once this crisis is over, Burke points to being more reverent at Mass and, most importantly, reception of Our Lord in Holy Communion in a reverent manner.

Noting recent polls that show how many Catholics do not believe in the Real Presence, the journalist is pointing out “our irreverence and sacrilege.”

“It has been on EWTN before with Bishop Schneider, on EWTN live, the insistence on receiving in the hand,” he explains, “on receiving in a less humble position – standing.”

Dan Burke proceeds to tell his audience that he once carefully watched a congregation of a thousand people receive Communion in the hand, and he saw not one single Catholic checking afterwards his hand for remaining particles. He then asked the priest how many times he sees particles of the Eucharist on his paten, and the priest answered: “every time.”

“That means,” concludes Burke, “that every Sunday in that parish the Lord's being dropped and trampled! I believe that's sacrilege.”

The former head of EWTN News does not see any difference between this and what satanists do, “other than intent.” The “gravity” is the “same,” he adds, to a satanist who steals a Eucharist and then desecrates it. “Of course, no Catholic has that intent,” Burke objects, “but in the end, the sacrilege happened.”

Thus, in order to make reparations for such sacrileges, the Catholic world should return to a more reverent way of going to Mass and of receiving Our Lord, kneeling and on the tongue.

Burke wishes us to come to Mass early and to prepare ourselves for it and not to talk with our neighbors in the pews, but, rather, to respect this sacred space. “We should not even be whispering so that we hinder somebody a pew over” from “properly worshipping Him.”

Stephanie Burke, who describes herself as a cradle Catholic, grew up with Communion in the hand, but says “I never had the intent to [commit] sacrilege.” She admits that it took her some time to adjust to receiving Holy Communion on the tongue, but then adds that this acceptance of Communion on the tongue is a “mortification” and an act of humility, to receive Our Lord through His priests’ hands.

“I would challenge you, I would beg you,” she tells her listeners, “to push yourself through that [initial hesitation to receive Holy Communion on the tongue].”

And “to be more humble,” adds Dan Burke.

The Burke couple does not go to the Traditional Latin Mass, but to a very reverent Novus Ordo Mass. But Burke says that “I would prefer the Latin Mass.”

Stephanie Burke, who was not able to be with her husband while he was in the ICU and intubated for three days, says that “I will spend the rest of my life…giving back for the great gift of your [Dan Burke's] life.” Both say how touched they were by all the prayers of Catholics around the world, but also especially by the priests – one of whom came to administer to them the Sacrament of Extreme Unction – and some bishops who wrote to them and prayed for them.

Burke also recounts how he himself was first skeptical about the danger of the coronavirus, but that he changed his attitude once he and his wife contracted it and saw how many people they themselves unwittingly then infected. It was like a “wildfire,” he says. Two of his employees got it from him, and they then passed it on to family members and others.

Therefore, he supports the decision to close churches, because this virus is “radically contagious.” But then the journalist adds: “I came to the conviction that this is part of a chastisement due to our irreverence and our sins.” A bishop opening his churches would unfortunately be “responsible for the deaths of the laity and of priests.”

“There is no answer” to this problem, Burke concludes, while stressing that priests should be inventive as to how to bring blessings to the faithful, such as Confessions in the open air. There is no answer due to the “sacrilege” and the “liturgical abuse” by the laity that is taking place “every day” in the Novus Ordo culture, Burke explains.

“Get right with the Lord, now!” exclaims Stephanie Burke, saying that this is a way of preparing for the worst case one should oneself get the coronavirus and is not able to go to Confession.

In addition, the Burkes have prepared a Catholic guide for this time of difficulty, stressing the importance of the rosary, mental prayer, consecration to the Sacred Heart of Jesus.

Burke is the chairman of the Avila Institute for Spiritual Formation and just published a new book, entitled Spiritual Spiritual Warfare and Discernment of Spirits (Sophia Institute Press). The book was released before he caught the coronavirus. It relates stories of childhood abuse and intense personal drama before his conversion to Christianity. The book also speaks about how Burke's engagement in spiritual warfare saved his life.

In January of 2020, he resigned from his leading position at EWTN News in order to concentrate his energy on the work of spiritual formation.