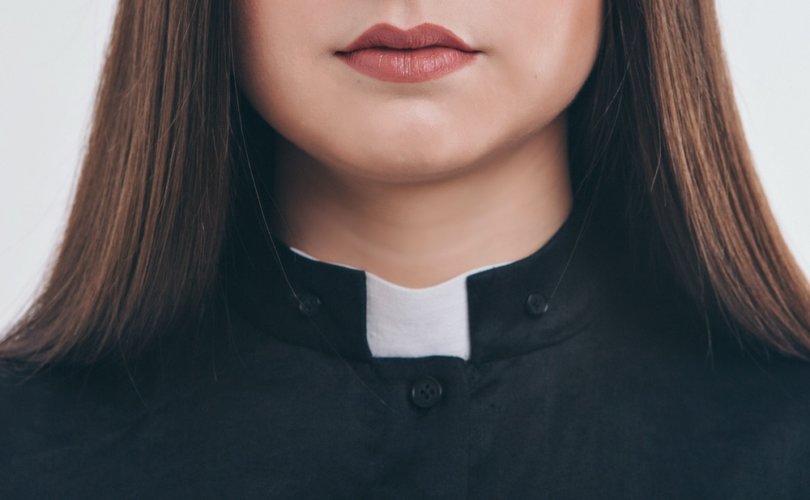 October 16, 2019 (LifeSiteNews) – Female “ordination” “simply has to come,” an employee of the German bishops’ relief agency Misereor said in an October 12 interview, adding that “the house of cards has to fall.”

Those words came from Regina Reinart, who is participating at the current Pan-Amazon Synod in Rome, in an interview with the website weltkirche.de. The German bishops' news website Katholisch.de subsequently picked it up.

Married priests must come too, said Reinart, who in addition to being Misereor’s expert on Brazil is a former nun.

Reinart also shows how intensely the two German bishops’ relief agencies – Adveniat and Misereor – are involved in the Amazon Synod. Upon reading this interview, LifeSiteNews reached out to Misereor and Adveniat, asking them about their financial and organizational investment in the events taking place in Rome – for example, the pagan ceremony in the Vatican Gardens, as well as the financial support for the travel expenses of many of the activists (indigenous and others) present in Rome. Misereor's press speaker, Ralph Allgaier, declined to answer these questions, including one on the symbolism of the naked pregnant statue seen at many synod events.

Should Adveniat answer our inquiry, LifeSiteNews will update this report.

To return to the interview with Mrs. Reinart. After being asked by weltkirche.de what she thinks about the calls for a female “diaconate” in the Catholic Church, Reinart says, “that is not enough for me. It has to go much farther. The house of cards has to fall. And it is already happening.” There is already a “married priesthood, the clear wish for optional celibacy, and the ordination [sic] of [women],” she adds. “This simply has to come.” According to Reinart, some bishops have “very clearly” spoken about these matters in the last days at the synod.

She states: “Some parishes in the Amazon say already today: ‘the worship service of sister is much more beautiful.’”

“We at the basis already live for a long time what does not yet have the official stamp, but it has to come. I think for this the Amazon Synod is a kairos moment, a moment of decision.”

Reinart, who lived in Brazil for 12 years, implies here that women in the Amazon are already playing a much more prominent role in the local Church than what the Catholic Church officially permits.

Similar statements have already been made at the synod – for example, when Deborah Rose-Milavec  spoke about hearing the confessions of Catholics without giving absolution.

According to one report, one Brazilian bishop – Bishop Adriano Ciocca Vasino – also revealed that in his school for future priests and deacons, he also forms female theologians and that he would “ordain” them as female “deacons” if the Church were to permit it. As Vatican News writes: “Theology in his school is open to both men and women, he said, but it begins with the local reality. After initial years of study, candidates are sent to work within an indigenous community for four years. If that community agrees they are suitable, they are ordained. The bishop said there are women too who are training to become theologians. Should the Pope allow it, and if the local community requests it, he would ordain them deacons, said Bishop Vasino.”

This could be a further revelation of the “realities” of which Mrs. Reinart also spoke in her interview.

As to Misereor's overall influence, Reinart states: “With the help of Adveniat and other organizations, we will succeed to make this regional synod a global synod.”

“I hope and pray that women in the future will have…voting rights at synods,” Reinart says, adding that the already “great influence” of women should not be “underestimated.” But nevertheless, she hopes that women not only are being “taken seriously,” but that they can “sit at the same table.”

“The clericalism has to stop – that is also what many men in the Church want.”

LifeSiteNews has already reported on Misereor and Adveniat’s heavy financial and organizational involvement with the synod. Many observers see a congruence between their support of certain reform plans at the Amazon Synod – such as the female “diaconate” and married priests – and the German plans for a “synodal path,” which starts the first day of Advent and will discuss exactly the same topics.

In an article on the German participants of the Amazon Synod, the German bishops' website Katholisch.de neglected to mention Reinart as one of the participants, merely mentioning Cardinal Reinhard Marx and Sister Birgit Weiler, who works in Peru. But in effect – especially in light of the role of Adveniat and Misereor – the German influence is much larger.

Additionally, the German priest Paulo Suess is one of the main architects of this Amazon Synod and one of the drafters of the synod's working document. The 81-year-old liberation theologian has lived in Brazil since the 1960s.

Misereor has already been involved with eight different events with participants of the Amazon Synod to talk about the conclusions to be drawn from it. These events are either co-sponsored or organized by Misereor, or they present a speaker who either represents Misereor or who works with Misereor.