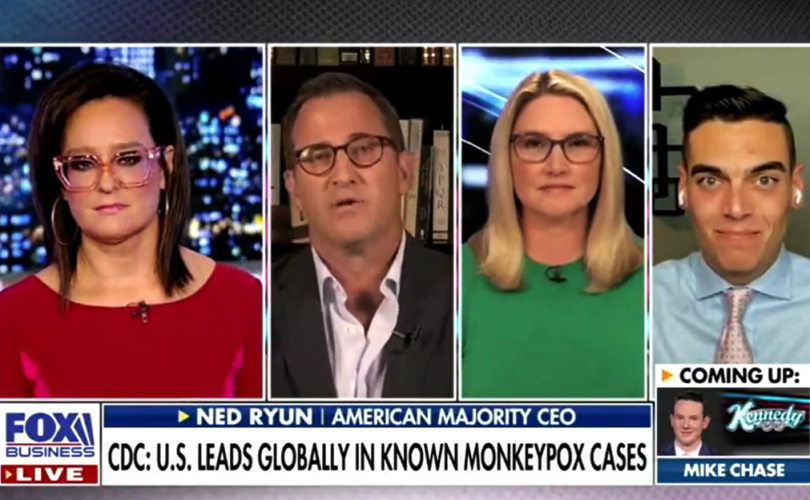 In a segment focusing on the spread of monkeypox, three panel members – including the Fox News host, Kennedy Montgomery – slammed American Majority CEO Ned Ryun as a “bigot” for daring to point out that more than nine out of 10 cases of monkeypox are contracted by men having sexual relations with men.

“It’s not about gay,” insisted Polumbo, a homosexual “libertarian/conservative” D.C. opinionator now serving as a policy correspondent at the Foundation for Economic Education.

Polumbo posted a clip of the panel discussion on Twitter:

We should’ve learned from the AIDS crisis that stigma isn’t the right way to approach public health. pic.twitter.com/xezZAKfQgb

“Come on, Ned,” chided Kennedy, shaking her head in disapproval. “Come on, man.”

“Go look at the New England Journal’s report that NBC reported on Friday in which of the 528 cases they reviewed, 95% were between sex between men,” said Ryun, picking up where he left off.

“I think we need to have a serious conversation about where this is coming from,” said Ryun as Polumbo continued to try to talk over him, “instead of going crazy and declaring a national pandemic when 3,000 people have it right now.  It’s insane.”

In 2019, Kennedy presided over the same-sex “wedding” of Fox News colleague Guy Benson.

Earlier, Kennedy said that same-sex marriage is “not just a matter of cultural curiosity, it is something that has reached critical mass and there is now cultural acceptance and rightly so.”

“It’s not bigotry.  This is science, Kennedy,” countered Ryun before the Fox News host shut him down and tossed a question to Polumbo, saying, “Because this has been an issue for more men in the gay community, it seems like it has been lower on the priority list, Brad.”

“And so we have to be really careful.  We saw with the AIDS crisis, with the HIV crisis, about how … gay people will be stigmatized over something that lots of people do,” Polumbo claimed. “And we gotta be careful about that.”

“Justin Trudeau may be a commie, but he’s still a snack.”

At the time, some Twitter followers reacted in horror over Polumbo’s ill-advised tweet.  “Justin might be the downfall of Canada, but he’s still a pretty boy,” paraphrased one Twitter user who asked, “Is this really where we are at as a society?”

“And that kind of bigoted language that makes it seem like the only people that get this are from one group of Americans,” chimed in Fox News liberal contributor Marie Harf, a former State Department spokesperson during the Obama administration.

“I’m glad Brad brought up HIV/AIDS,” Harf added. “You don’t fight diseases by caricaturing the people who get them.”

Fox News sold out to the LGBT agenda long ago, so it’s no surprise that the once-conservative news outlet is following the lead of the World Health Organization (WHO) and the Centers for Disease Control (CDC) by obscuring the fact that men who have anonymous sex with men are the epicenter from which the scourge of monkeypox is spreading.