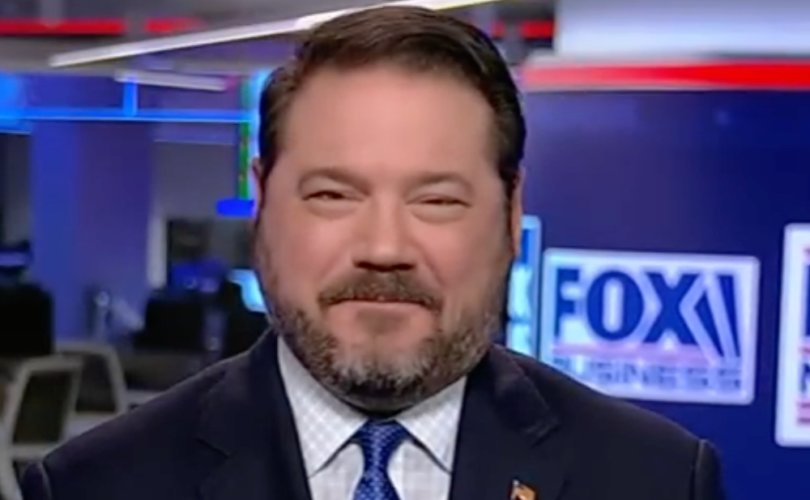 (LifeSiteNews) – A high-profile Washington, D.C. conservative pundit exploded in anger during a podcast interview he was conducting when his guest suggested that the burgeoning conservative Christian nationalist movement would inevitably push for the overturning of the U.S. Supreme Court’s 2015 Obergefell decision legalizing same-sex marriage.

After asserting that Dave Rubin’s gay “marriage” is something “beautiful,” Ben Domenech, a Fox News contributor and founder and former publisher of The Federalist, lashed out at his guest, National Conservatism movement leader Yoram Hazony, who had said that “gay marriage is already back on the table,” ripe for a revitalized national public debate.

Domenech, showing that his ties with social conservatives are merely tenuous, seethed:

I want you to understand this. We will beat you. We are beating you. We are destroying you in terms of the polling, like there’s no basis for an anti-gay marriage conservative movement. It doesn’t exist. I mean, it’s less than 25%. You are losing this argument.  You’ve lost the argument.  I don’t know why you want to go back and fight it.

“You’re picking a fight that you’ve already lost,” added Domenech. “Everyone who agrees with you is going to die.”

A few minutes later Domenech again pushed back against Hazony and the conservative Christian nationalist movement as out of step with America, doubling down on homosexual “marriage” as an important part of the “American experience” and adding support for pornography to the mix:

There are a lot of issues where the Christian nationalist is actually at odds with the American experience in ways that are detrimental to their ability to succeed. I would include gay marriage among that, but I would also include pornography among that. … I just don’t think that’s going to happen.

The dramatic revival of Christian political activism can’t be stopped

As Hazony, an Orthodox Jew and Chairman of the Edmund Burke Foundation, continued to stand up to him, Domenech objected to Hazony’s defense of the conservative Christian nationalist movement, stooping to say, “Well, you know what?  I’m a Christian, and you’re not.”

Stunned by Domenech’s infelicitous remark, his guest asked, “Do you want to know what I think is going to happen or have you heard enough?”

Hazony then explained, “I think as a fact what is happening is that we are watching a revival of a Christian conservatism, a Christian nationalism which resembles in a lot of ways the movement that put Ronald Reagan in office in the 1980s. ”

Hazony recounted that after he published his book on the Bible in 2012, high profile Christian figures began reaching out to him about what they saw as the death of Christianity in America.  While Supreme Court decisions on abortion and gay marriage played a role in fostering this perspective, the main thing that informed the views of these folks was that they realized that they “were losing their kids, and that they couldn’t see how they could keep their kids Christian in the cultural environment that was taking place.”

“What they were describing is the result of one loss after another after another. It had gone on for two generations,” said Hazony, adding:

What’s taking place right now… is related to the resurgence of nationalism, and Christian nationalism is connected to the status of the Bible. The clarity with which these young Christian leaders are able to see the difference between woke neo-Marxism, which is what’s coming, and a restoration of many Christian pillars of how society is supposed to work — the clarity between those two things is causing all this wind to blow in all these sails.

“I don’t think you can stop … the absolute, the dramatic revival of Christian political activism and Christian nationalism as a reaction to the destruction of the liberal order,” Hazony declared.  “What’s coming is going to be a choice between something that restores big pieces of the old Christian norms in public life and a continuation of the cultural revolution.”

“Those people who want 1985 liberalism, you may think that they have the most coherent worldview, that their arguments are the best arguments, but that doesn’t make any difference,” he continued.  “We tried 1985 liberalism, and it ended up being Marxism.”

A decade ago, a friend and I approached Domenech about his views on same-sex marriage after he had participated in a panel discussion at the American Enterprise Institute.  He made it clear it wasn’t an issue he would fight against.

Domenech says he’s a Christian who supports same-sex marriage. He obviously thinks it loving and merciful to do so.  But as my friend Jean Lloyd, a same-sex attracted woman happily married to her husband and a mother of two, once pleaded with her pastor and her Christian friends:

Love me but remember that you cannot be more merciful than God. It isn’t mercy to affirm same-sex acts as good. Practice compassion according to the root meaning of “compassion”: Suffer with me.

Don’t compromise truth; help me to live in harmony with it.