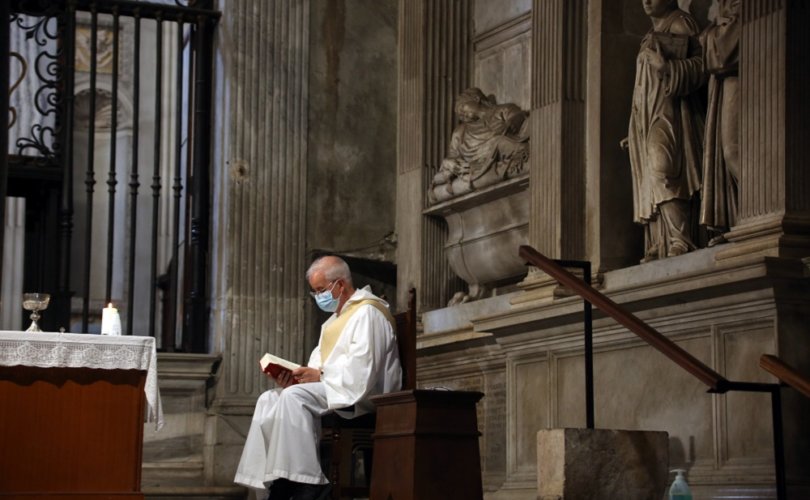 WASHINGTON, DC, July 22, 2020 (LifeSiteNews) — Jesuit Father James Martin has intimated that you are neither a Christian nor a Catholic nor pro-life if you fail to wear a mask in public as the COVID-19 pandemic trudges on.

“Are you a Christian? Are you a Catholic? Are you pro-life? Do you care about people’s lives?” asked Martin in a tweet.

“Then wear a mask,” he commands.

Are you a Christian? Are you a Catholic? Are you pro-life? Do you care about other people's lives? Then wear a mask. https://t.co/XQGKYEXFxg #MasksSaveLives #WearAMask

Through his tweet, Fr. Martin was promoting his most recent America Magazine opinion piece, which begins:

I am pro-life. What does that mean? Simply put, it means I believe that all life is sacred, inviolable and a gift from God. That reverence for life includes a desire to care for the unborn child in the womb, the elderly person in danger of euthanasia, the refugee starving on the border, the L.G.B.T. youth tempted to suicide and the inmate being readied for execution on death row.

Notice how he doesn’t address the millions of Americans made destitute due to the coronavirus lockdowns, not knowing where their family’s next meal will come, but he shines a light on refugees “starving at the border.” Why? Because that is a USCCB/seamless garment talking point.

Likewise, Martin focuses on “L.G.B.T. youth tempted to suicide,” but not the many men who have contemplated or committed suicide because their jobs evaporated or their businesses were destroyed amid the prolonged lockdowns. No longer able to provide for their children, men overwhelmed with shame and hopelessness often see no other way out.

“The inmate being readied for execution on death row” — also a major narrative woven into the seamless garment — suggests a moral equivalence between those who murder and the thousands of innocent unborn who are murdered daily. Martin subscribes to this.

Perhaps more significant is what Martin fails to mention.

He wags his finger at some who don’t wear masks while ignoring the danger that tens of thousands of rioters and anarchists who ignored social distancing regulations in recent weeks in order to protest, loot, and destroy property in America’s Democrat-run cities have exposed their neighbors to.

But those “experts” whom Martin insists we should trust and follow blindly have discredited themselves.

“By now, the collapse of government legitimacy is complete. For three months, public officials abdicated their responsibility to balance the costs and benefits of any given policy,” said Heather Mac Donald, the Thomas W. Smith Fellow at the Manhattan Institute and a contributing editor of City Journal, in a lecture delivered for Hillsdale college in June.

“They put the future of hundreds of millions of Americans in the hands of a narrow set of experts who lack all awareness of the workings of economic and social systems, and whose ‘science’ was built on the ever-shifting sand of speculative models and on extreme risk aversion regarding only one kind of risk,” declared Mac Donald.

“The evidence is hardly strong enough to elevate mask-wearing into the epitome of moral behavior,” wrote Chris von Csefalvay, an epidemiologist and vice president of special projects at Starschema. “Doing so reflects a greater preoccupation with the psychological effect of masks — perhaps as a restoration of control in the face of an unseen and often perplexing enemy with no cure and no prophylaxis — than with their scientific reality.”

“Even in our degenerate age, many people retain enough common sense to see that they are being presented with a false alternative,” wrote Ed Feser, a blogger who teaches philosophy at Pasadena City College.

Feser was addressing the online fretting about the state of the “American character” by Damon Linker, who, like Fr. Martin, had engaged in selective moralizing.

People “are capable of taking the virus seriously while balking at needlessly extreme measures for dealing with it,” said Feser. “And their skepticism is bound only to increase when it is met, not with dispassionate arguments, but with shrill accusations of being ‘COVID deniers’ or ‘anti-science,’ from people many of whom can for independent reasons be judged to lack common sense.”

“Even if the most dire warnings currently being issued by experts, politicians, and journalists were well-founded — which, at this point, I personally don’t believe for a minute — the latter can only blame themselves if more people don’t heed them,” he added.