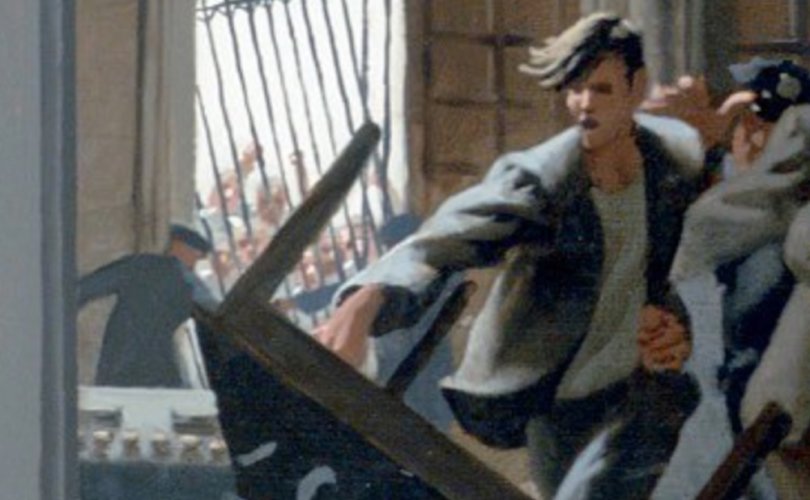 November 24, 2019 (LifeSiteNews) – In sending out a tweet about the Gospel reading from Friday’s Mass, Fr. James Martin, SJ chose to share a painting drawn from a series of blasphemous homoerotic works depicting the life of Jesus as if he were a gay man.

“Gospel: Today Jesus drives the money-changers from the Temple (Lk 19). NT scholars say this was one of the main events that precipitated his execution,” tweeted the Jesuit. “Yet Jesus is not cowed by opponents. Another Gospel says ‘zeal’ for his Father's house ‘consumes him.’”

Gospel: Today Jesus drives the money-changers from the Temple (Lk 19). NT scholars say this was one of the main events that precipitated his execution. Yet Jesus is not cowed by opponents. Another Gospel says “zeal” for his Father's house “consumes him.” Also notice that Jesus… pic.twitter.com/MRGpHLBcle

And Fr. Martin knew exactly what he was doing, because in a later tweet he credited the artist: “Image, Douglas Blanchard.”

While this painting is jarring because an effeminate Jesus is depicted turning over the money changers’ tables in a contemporary setting, other paintings in the series show an overtly sexualized version of Jesus in various Gospel stories.

The painting is one of a set of 24 by homosexual artist Douglas Blanchard, used to illustrate a book titled, “The Passion of Christ: A Gay Vision.”

While the Amazon description of the book is appallingly offensive not just to all Christians, but to the Person of Jesus Christ and God the Father, Fr. Martin nonetheless chose to use one of the Blanchard paintings to illustrate the Gospel.

Amazon describes the book by author Kittredge Cherry and illustrated by Blanchard:

Meet Jesus as a gay man of today in a contemporary city with The Passion of Christ: A Gay Vision. In stunning new images, the modern Christ figure is jeered by fundamentalists, tortured by Marine look-alikes, and rises again to enjoy homoerotic moments with God.

The “fundamentalists” who jeer Christ are no doubt meant to be those who abide by Church teaching and reject the normalization of homosexuality within the Church.

But far more appalling is the suggestion that Jesus rose again “to enjoy homoerotic moments with God,” a notion to which Fr. Martin lends tacit approval by drawing from the Blanchard series of paintings. The homoeroticizing of the passion of the Christ is blasphemous.

The 24 paintings in the gay Passion cover Jesus' final days, including his arrest, trial, crucifixion, and resurrection. A queer Passion is important now because Christianity is being used to justify hate and discrimination against lesbian, gay, bisexual and transgender people. Each image is accompanied by insightful commentary, plus a short prayer and scripture. If Jesus came back today, would he be crucified all over again? Would we even recognize him? See for yourself in the gay vision of the Passion.

The tweet is perhaps an admission by Fr. Martin of his ultimate intent as well as an admission of the anti-Christian and anti-Christ intent underlying the LGBT cultural movement: To co-opt the message of the Gospel, to dethrone Jesus Christ in the hearts and minds of Christians, and to install homosexuality and transgenderism in His place.

Twitter users respond: ‘You would be the first one that Our Lord would drive out of His house’

“What would St. Faustina say about this when her own artist couldn’t do justice to the image of Jesus? What would our MOTHER say to this depiction of Her precious Son who was beaten mocked starved of water & crucified the most painful death by our sins?” asked Lizzy. “What does she think of this?”

“Father, please, you're breaking my heart,” pleaded Lizzy in a separate Tweet. “Jesus did NOT want to have sex with men. He was ALL GOOD ALL HOLY ALL GOD. He would NEVER approve of this.”

“Which figure represents Jesus in this picture? The one with oh so cute haircut?” asked Eugenio. “Have you no sense of reverence for our Precious Lord?”

“You would be the first one that Our Lord would drive out of His house,” asserted T Mac. “Promoting immorality isn’t exactly pleasing to the Lord.”

While all of Blanchard’s illustrations are disturbing, portraying the main theme of the Gospel message as homoerotic, perhaps the final three paintings in the series are the most troubling.

In “the Ascension,” Jesus is shown as a shirtless male in the embrace of a male angel who grasps Jesus’ buttocks. Same-sex attraction and homosexual sex acts are shown to be the primary purpose of the incarnation, passion, resurrection, and ascension of the Second Person of the Blessed Trinity.

In Blanchard’s depiction of the Day of Pentecost, The Holy Spirit descends on an urban group in the form of a woman.

Jesus ‘comes out of the closet’

Author Kittredge Cherry explains the dark meaning of the final painting, which depicts the Trinity. Cherry’s explanation veers far from the immutable Truth about the Father, Son, and Holy Spirit. It is a “Holy gay wedding.”

An angelic figure blesses a gay couple in “The Trinity,” the final, climactic image in Blanchard’s Passion of Christ. The painting can stand alone to affirm the holiness of gay couples, but it also serves as a meditation on the Christian Trinity.

The couple holds hands before a table set with milk, honey, and fruit — references to the Promised Land. The man draped in red reaches toward out, coaxing the viewer to join them in the sunny garden. The winged woman in the golden robe is the same Holy Spirit who arrived in the previous painting. An arch in the background hints at the gate of heaven. Indeed viewers are welcome to imagine themselves seated in paradise with Christ as their bridegroom.

“The Trinity” shows how Jesus has been transformed by his experience of the Passion. He moved from the dark prison of the first painting to a bright land of promise, out of the closet, into the streets, and on to holy bliss. He completed the mythic hero’s journey: martyred and reborn with power to redeem the world.

What is the gay vision of heaven? The Holy Spirit inspires each person to see visions of God in his or her own way. Look, the Holy Spirit celebrates two men who love each other! She looks like an angel as She protects the male couple. Are the men Jesus and God? No names can fully express the omnigendered Trinity of Love, Lover, and Beloved… or Mind, Body, and Spirit. God is madly in love with everybody. God promises to lead people out of injustice and into a good land flowing with milk and honey. We can travel in the same paths where Jesus journeyed. Opening to the joy and pain of the world, we can experience all of creation as our body — the body of Christ. As queer as it sounds, we can create our own land of milk and honey. As Jesus often said, heaven is among us and within us. Now that we have seen a gay vision of Christ’s Passion, we are free to move forward with passion.

The LGBT movement is not benign. It is now brazenly revealing itself to be the most grave satanic threat to the Church today, and Fr. James Martin, SJ is leading the coup attempt within the Roman Catholic Church.

Archbishop Chaput of Philadelphia was right to publicly correct Fr. Martin a few weeks ago, and Bishop Strickland of Tyler, Texas has called attention to Martin’s troubling “ministry.” Only a few of their brother bishops have rushed to support these brave prelates who sense the danger that Martin’s actions present to the Church, while the majority remain silent, allowing the Jesuit to carry on with his advocacy unchecked.