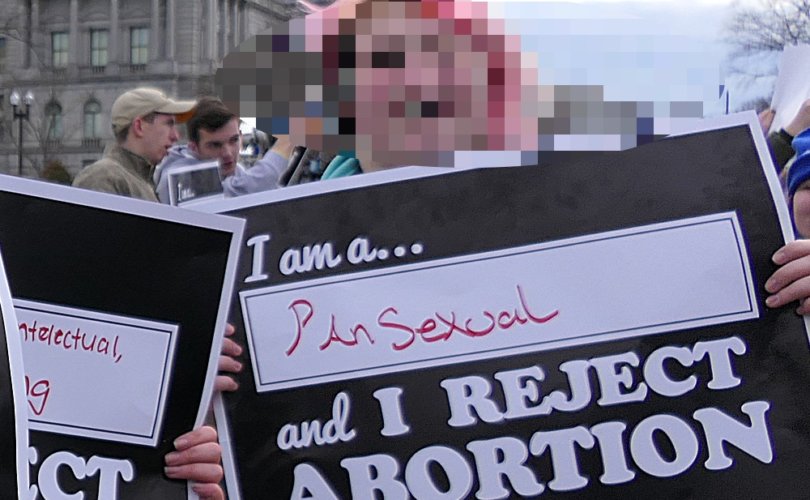 An attendee at the 2017 March for Life holds a sign declaring a 'pansexual' identity but opposition to abortion. LifeSiteNews blurred this photo to protect the identity of the sign-holder, who appeared to be an underage student.LifeSiteNews

January 25, 2018 (LifeSiteNews) – As a same-sex attracted man, I can say categorically—explicitly and unambiguously: Pay no attention to the purveyors of gay liberation theology who promote the infiltration and metastasization of LGBT ideology within the Church.

Fr. James Martin, S.J., is perhaps its most visible proponent, interpreting Scripture—and more broadly, all Church teaching—in light of the LGBT experience. He sees Catholicism through an LGBT prism and speaks in an LGBT tongue, presenting an LGBT-infused Gospel.

This is a Gospel foreign to most Catholic ears, but through constant repetition, his message is being mainstreamed. This is a tactic meant to normalize and bring acceptance to every attitude and behavior lurking beneath the LGBT umbrella.

Even to many same-sex attracted Catholics like me, his message is not only foreign; it rings 100% untrue. Yet crowds which gather to hear Fr. Martin greet him enthusiastically, lending him the status of a modern day Martin Luther King, Jr. Those who choose to call themselves gay, lesbian, or transgender and Catholic, and often their loved ones, see Martin as if he were leading a freedom march through a backward, prejudiced church, seeking to end LGBT discrimination.

The Jesuit has taken great license with Pope Francis’ statement, “Who am I to judge?” to the point of not only casting aside all judgement, but leaping beyond it and justifying LGBT identity and activity as fully normal. And stunningly, sin is no longer sin.

Chaste same-sex attracted Catholics wonder, “Has engaging in homosexual acts really been no different than eating meat on Fridays? Has sodomy really been no big deal all along?”

And those questions tempt one to wonder: “Why do I even bother to live a chaste life?” and, “Did the Church dupe us until now?”

These are all valid questions being provoked by the likes of Martin.

But Martin is not the only one advancing the mainstreaming of sodomy as a normal, almost trivial thing.

Just last weekend I attended the Cardinal O’Connor Conference on Life at Georgetown University, where self-proclaimed pro-life lesbian atheist Rosemary Geraghty led a session on “radical inclusivity,” asserting that pro-lifers – in order to be truly “pro-life” – should use preferred pronouns for transgender and gender-ambiguous people while being accepting of homosexuality.

She spoke the language of politically correct “inclusivity,” no doubt very familiar to her audience of mostly college and high school students.

At the end of her presentation she received a standing ovation from the crowd, signalling that a dangerous notion about the normalcy of homosexuality and transgenderism had been successfully implanted into their young, impressionable psyches. Dangerous, because it is antithetical to the Gospel. Troubling, because this was done at a “pro-life” conference at a Catholic university, followed by a Mass for Life offered by a bishop.

And these same notions are also being promoted elsewhere within the pro-life movement in the hope that they will trickle down and into the mind of every pro-lifer.

The message and the way it is being advanced are insidious and pernicious.

Our pop-culture church is tuned into the wrong message

If my return to the Church had been delayed five years, from 2013 to today, I most likely would not have made the effort. Why? Because it was only the clear message and brilliant light of the Gospel and its power which drew me back. In 2018, that pure message is being tainted, and that brilliant light is being increasingly dimmed, not from detractors outside the Church, but from within.

Regarding the controversy over same-sex marriage, “Some want the church to stay away from the marriage debate because it’s not a ‘seeker- friendly’ issue,” notes Ryan T. Anderson, Ph.D., in Truth Overruled! But “the church’s countercultural truth telling about the nature of marriage makes its claims about supernatural truth more, not less, credible.”

Cardinal Sarah performed a great service for the same-sex attracted when he said last year, “‘Under no circumstances can [homosexual acts] be approved’ (CCC 2357). The respect and sensitivity to which the Catechism rightly calls us does not give us permission to deprive men and women who experience SSA (same-sex attraction) of the fullness of the Gospel. To omit the ‘hard sayings’ of Christ and his Church is not charity.”

And in the pages of The Wall Street Journal, I gratefully said of Cardinal Sarah, “Those who experience same-sex attraction have no greater pastor, no greater friend than this man who is uncompromising with the truth.”

And yet many clerics and other leaders within the Catholic Church do seek to deprive we same-sex attracted of the fullness of the Gospel. And it is indeed a loveless act.

A few years ago Jean Lloyd penned a beautiful essay, Seven Things I Wish My Pastor Knew About My Homosexuality, which resonated with chaste same-sex attracted Catholics like me.

I wish you knew that it honors neither God, nor me, to apologize for His plan or design. I appreciate empathy for the pain my misdirected longings may cause, but God is not arbitrarily withholding something good from me. He is showing me what leads to life and human flourishing and is keeping me from that which will harm me. ‘Let love be without dissimulation.’ Love me and tell me the truth.

May I make two requests? Love me, but remember that you cannot be more merciful than God. It isn’t mercy to affirm same-sex acts as good. Don’t compromise truth; help me to live in harmony with it.

I’m asking you to help me take up my cross and follow Jesus.

There are many same-sex attracted Catholics who echo Lloyd constantly and consistently, including Joseph Sciambra, Daniel Mattson, Paul Darrow, Rilene Simpson and a legion of members of Courage, the international Catholic apostolate ministering to persons with same-sex attractions.

And yet Fr. Martin, and those of his ilk, refuse to acknowledge the existence of these individuals, let alone their message, because doing so would call into question the advancement of LGBT into the Church.