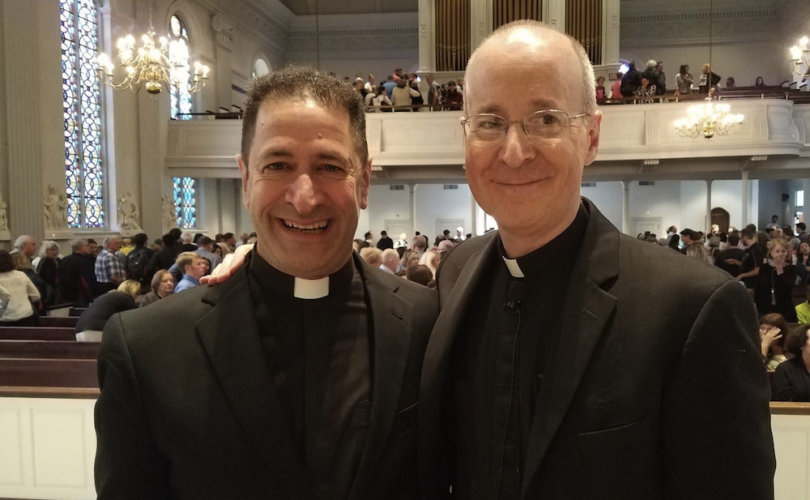 The Jesuit-run parish, located just outside Georgetown University’s main gate, draws well-heeled Catholic elites — who deem their own neighborhood parishes too “conservative,” too “rigid” — from tony suburbs around the city.

Founded in 1787, the parish finds purpose being in “solidarity with those living on the margins of society, empowering them to change unjust social structures.” Apparently, the most vulnerable and victimized living “on the margins” today include Catholic “gays” and “transgenders,” pushed there, according to Martin, by Catholicism, composed of “intolerant,” “homophobic,” “hateful” clerics and lay people who believe sex is conjugal only and that men are men and women are women.

Those who now loudly demand that the Church accept homosexual activity and transgenderism as both normal and a blessing from God are the meek and pure in spirit in Fr. Martin’s revised version of the Beatitudes. Those who don’t are the new Pharisees, hoisting what Fr. Martin seems to think are impossibly heavy moral loads upon the backs of their fellow believers.

Fr. Martin and his confreres seek to establish a new pastoral approach that deals with people right where they’re at, one where they don't “feel judged.” So far, so good. But the problem with Fr. Martin’s approach is that it leaves the same-sex attracted stuck in the LGBT vortex, with no hope or expectation of escape. It’s not accompaniment, it’s pastoral abandonment. For Martin, sodomy isn’t a sin, it’s a blessing.

I am a same-sex attracted Catholic who attended his speech. Fr. Martin is breathtakingly wrong about how best to pastor the same-sex attracted. And his massive underestimation of the very  real power of the Gospel to change lives is troubling to witness in a man who wears a Roman collar and enjoys a growing cult following.

Early on Saturday morning, September 30, a line began to form at Holy Trinity’s front door. It soon ran down the church’s broad steps, and snaked around the block. Most hoped to hear the Jesuit pro-gay wunderkind affirm their own beliefs about the wholesomeness and normalcy of the LGBT presence in the Catholic Church.

Before launching into his presentation, Martin implied strong support for his pro-LGBT message from Washington D.C.’s Cardinal Donald Wuerl.

Referring to his experience of recently being denied an opportunity to speak at Catholic University, Martin said, “Certainly someone who has been very supportive through this whole thing is your Archbishop, Cardinal Wuerl, who has been very kind to me, and I guess I can say reached out to me after this [Catholic University/Theological College] cancellation. He would have come today, but he’s in Rome.”

Later in his presentation, Martin would go on to say, “I’ve had lots of support: Cardinal Cupich, Cardinal Tobin, Cardinal Wuerl, and … people in the Vatican.”

He would also speak without hesitation about the camaraderie he enjoys with Sister Jeannine Gramick, Frank DeBernardo of New Ways Ministry, both of whom were previously forbidden from identifying their pro-LGBT work as “Catholic.”

‘No ill will’ toward those who adore him, contempt for those who don’t

Fr. Martin spoke at length regarding the recent rescission of his invitation to speak at our nation’s premiere Catholic Institution of higher learning: “I want to say for the record … I hold zero ill will toward Theological College; I hold no ill will toward Catholic University, which is the sponsor of Theological College. I’ve been there many times. I’m friends with [University President] John Garvey. I’ve spoken there several times … Zero ill will.”

Martin’s litany of forgiveness and forbearance stopped there. His silence spoke loudly, indicating he does bear ill will toward the Catholics he blames for his lost speaking gigs. At the same time, his silence delivered a clear signal, directing his audience — a packed house of 800 or so — to share his contempt for conservative Catholics who seek to protect the magisterium of the Church.

That Saturday morning, the pure message of the Gospel was traded for an adulterated one, stealing away young troubled lives from the Gospel’s saving message, dragging them off to a place where the only message they hear is that of the world — Fr. Martin’s peculiar world. The mostly senior citizens packing the pews loved it.

Martin’s Catholic World is insulated from the Gospel, true repentance, the Sacrament of Reconciliation, and the cleansing power of the blood of Christ, all of which are rejected in favor of an LGBT-centric — LGBT-dominant — view of the world and the Church, where the Cross of Christ on Calvary is supplanted with the garish rainbow flag.

In Martin’s world, mankind’s supreme mortal sin is rejection of sodomy and transgenderism as unorthodox, where the promotion of complementarity and conjugal sex within marriage is viewed as somehow oppressive and offensive to him and his disciples. In Martin’s world, truth is a burden, it does not set you free. Unrestricted sodomy is interpreted as divine emancipation.

In his Holy Trinity talk, chastity for same-sex attracted men and women in the Church was dismissed through omission, while parents who assertetheir cross-dressing, transgendered children should be viewed as completely normal received warm applause.

Cardinal Bergoglio ‘got it’ before he evolved

Cardinal Jorge Bergoglio, before rising to the Seat of Peter, warned, “Let’s not be naive, we’re not talking about a simple political battle; it is a destructive pretension against the plan of God. We are … talking about … a machination of the Father of Lies that seeks to confuse and deceive the children of God.”

Fr. Martin is now a preeminent playwright, actor and stage manager of those pretensions.  Gleefully so. Proudly so.

And though he was 4,000 miles away in Rome, Pope Francis’ presence was strongly felt during Martin’s talk. After becoming Pope, he effectively neutered his earlier bold declaration of truth about the Father of Lies, trading it for “Who am I to Judge?” — a question that resounded both audibly and visibly through Holy Trinity Church, even on t-shirts that morning

Fr. Martin spoke glowingly of the Pontiff’s diligent work replacing cardinals and bishops around the world and in key Vatican positions who had been appointed by St. John Paul II and Pope Benedict, remaking the Church into a “more pastoral,” seeker-friendly place, where no one feels judged. In Fr. Martin’s vision for the church, conscience is a nuisance, not a guide.

In Holy Trinity that morning, pretty much everybody in the pews seemed AOK with all that was said. The crowd loved the man and his message.

In the end, Martin received a long standing ovation after his nearly 1 ½-hour presentation, the crowd perhaps not fully realizing that they are clapping for sodomy, standing up for heresy, and cheering for webs being woven by the Father of Lies. Yet none seemed willing to even ponder the validity — or grave error — presented that venerable old church.

Back in the day, gays often joked about men who accidentally betray their concealed “gayness” when they open their mouths to speak, saying: “He looked like a straight guy, but when he opened his mouth, a purse fell out,” — a snarky zinger invariably followed by raucous laughter.  When Fr. Martin rose to the lectern and opened his mouth, not only did a velvet purse fall out, so did many velvet lies and half-truths tucked away inside.