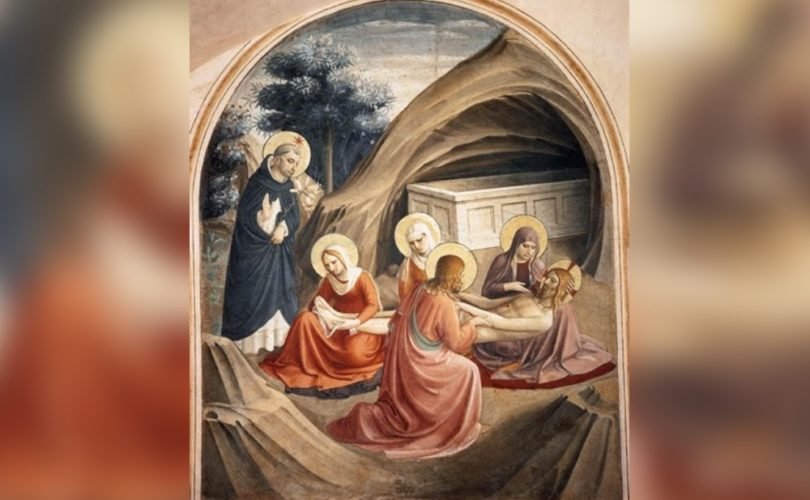 July 17, 2018 (LifeSiteNews) – Fra Angelico (born Guido di Pietro, ca. 1395–February 18, 1455) was an Early Italian Renaissance painter described by Giorgio Vasari in his Lives of the Artists as having “a rare and perfect talent.” He was known to contemporaries as Fra Giovanni da Fiesole and Fra Giovanni Angelico. In modern Italian he is called il Beato Angelico, the “blessed angelic one.” In 1982, Pope John Paul II confirmed his cultus in acknowledgment of the holiness of his life, thereby making the title of “Blessed” official. In 1984, the same pope declared Blessed Angelico the patron of all Catholic artists.

Vasari wrote of Fra Angelico that “it is impossible to bestow too much praise on this holy father, who was so humble and modest in all that he did and said and whose pictures were painted with such facility and piety.” According to the same biographer, Fra Angelico initially received training as an illuminator, possibly working with his older brother Benedetto who was also a Dominican and an illuminator.

In 1436, Fra Angelico moved from Fiesole to the new Friary of San Marco in Florence, whose ruler, Cosimo de’ Medici, a notable patron of the Dominicans, lost no time in commissioning the artist to decorate the building with frescoes. The walls are adorned throughout with prayerful images—a marvel for their sheer number, consistency of quality, intensity of feeling, and contemplative insight. He treated every simple cell as a palace of the king, a place where his brothers in religious life would encounter the living God in His Christ and in His saints. At the time these frescoes were made and long after, the priory was cloistered. No one but the brothers and possibly the rare visiting benefactor would have seen these, until hundreds of years later when the priory was first opened up to public view.

Displayed here is the fresco of the lamentation over the dead Christ, prior to His entombment. As was customary at this time in Italian Renaissance religious art, figures from different periods appear in the same composition; thus, St. Dominic is part of the scene as well, since by the sacramental mysteries and by his own contemplation he has been made a contemporary of the apostles.

The Virgin Mother holds her Son calmly in her hands, acquiescing with her noble spirit to all that He has chosen to undergo for the salvation of mankind. The Beloved Disciple kneels with eager intentness, as if genuflecting before receiving the Holy Sacrament from the altar. The Magdalen tenderly holds the feet of Christ, her eyes tired out from weeping. The cave of the tomb pushes out at us like an irresistible vortex. Not even the Son of God will escape this cavernous entry into the underworld. Greenish-gray trees flecked with light subtly remind us that the author of life cannot be swallowed up forever by the grave but will blossom forth like the rest of nature in springtime.

One could teach the entire content of the Catholic Faith, as well as a whole introduction to the spiritual life and prayer, from Fra Angelico’s paintings in San Marco!

From various accounts of Fra Angelico’s life, it is possible to gain some sense of why he was deserving of beatification. He led the devout and ascetic life of a Dominican friar, and never rose above that rank; he followed the dictates of the order in caring for the poor; he was said to be always good-humored. All of his many paintings were of divine subjects, and it seems that he never altered or retouched them once they were finished, perhaps from a religious conviction that, because his paintings were inspired of God, they should retain their original form. He was wont to say that he who illustrates the acts of Christ should be with Christ. It is averred that he never handled a brush without fervent prayer and he wept whenever he painted a Crucifixion.

In 1455 Fra Angelico died while staying at a Dominican convent in Rome. He was buried in the church of Santa Maria sopra Minerva, where visitors may venerate his tomb to this day.