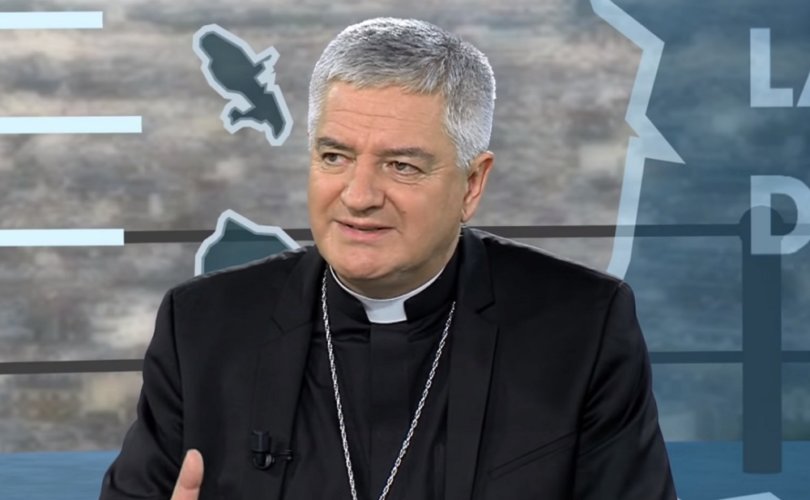 July 20, 2020 (LifeSiteNews) — A special sitting of the French National Assembly will take place as of July 27, extending the ordinary parliamentary session for “emergency” reasons, in order for the deputies to give the biotheics law currently under debate a second reading. Its main provisions include giving lesbian couples and single women access to artificial procreation and widening the conditions of research on human embyros. While the Senate had scrapped some of its most shocking dispositions, the redrafted law, as approved by the National Assembly’s special bioethics commission a few weeks ago, includes many new transgressions that are being given a chance to be introduced into French law at a breakneck pace.

France has been only partially out of lockdown because of the Chinese coronavirus for two months, and social unrest, record unemployment, and the crash of the tourist industry are only some of the problems president Emmanuel Macron and his new prime minister, Jean Castex, face. Choosing to use precious National Assembly time to push a deeply inhuman revision of an already transgressive bioethics law into existence is truly a statement of what French political powers see as their main priority.

Guyonne de Monjou, writing for Le Figaro (right of center), noted that the new proposed measures by the special commission “make your head spin.” “A frontier is being noiselessly crossed: the one that separated human from animal life, and the silence is deafening.”

Patrick Hetzel, opposition member (“Les Républicains”) for the Bas-Rhin in the east of France, and one of the few deputies — twenty or so out of 577 — who are fighting the new text, summarized the situation: “This is extremely serious. They are authorizing drug babies, transgenic embryos, human-animal chimeras, non-consent of the spouse on gamete donation, the extension of preimplantation diagnosis to non-hereditary diseases. They are abolishing the multidisciplinary team responsible for preparing couples for medically assisted procreation.”

If the new law is adopted in its present terms, chimeras and transgenic embryos will be allowed to be produced and “utilized.” Human cells would be allowed to be incorporated into animal embryos.

Most of the amendments were introduced by Macron’s majority party, “La République en Marche,” while government ministers were mostly absent from the commission’s debates.

Here below is Bishop Aillet’s statement.

Despite the coronavirus health crisis and the serious economic and social difficulties resulting from it (recession, serial bankruptcies, a foreseeable explosion of the number of job seekers, etc.), the President of the Republic has decided to extend until 31 July the extraordinary session of Parliament in view of the second reading of the draft law on bioethics in the National Assembly. The President of the Republic and the Government are thus making the adoption of this text an absolute priority, in contrast with the overwhelming majority of our fellow citizens of whom, in the present context, 71 percent think that this bill should be suspended or withdrawn… Only 1 percent considers that medically assisted procreation for single women and female couples is a priority, according to an IFOP survey carried out from June 12 to 15, 2020 among a representative sample of 1005 people.

This bias says a lot about the ideological assumptions that appear to guide the action of public authorities, as well as the predominant influence within the political class and the ruling circles of certain lobbies, even though they represent ultra-minority groups.

Need I recall that making medically assisted procreation available to both single women and couples without therapeutic grounds for infertility amounts to deliberately depriving children thus conceived of any possibility of knowing their father and their paternal filiation, despite the UN Convention on the Rights of the Child ratified by France, according to which every child has “as far as possible, the right to know and be cared for by his or her parents” (art. 7-1)?

The draft bioethics law will be examined in public session from 27 July in the National Assembly, but the work of the “special bioethics commission” that has just been completed has considerably worsened the content of the text that the National Assembly had adopted in its first reading in October 2019 and that the Senate had extensively redrafted last February.

The “sorcerer’s apprentices” of the special commission did not hesitate in the face of any transgression, and have indeed initiated of a number of provisions that would undeniably lead to a “major anthropological breach”.

For example, the “ROPA method” (“reception of oocytes from the partner”), which consists of fertilizing a woman’s oocyte before re-implanting it in her partner’s uterus, so that both can be recognized as being the mother of the same child, could be legalized, at the price of a complete disintegration of motherhood… Unless, that is, if we have here a tactic to minimize the gravity of “medically assisted procreation without a father” in the eyes of the  members of the National Assembly in order to win their support for that more easily!

The special committee also intends to allow the creation of transgenic embryos, i.e. the genetic modification of human embryos, which is likely to result, in the near future, in the birth of genetically modified children.

The members of the committee also intend to permit the manufacture of chimeric human-animal embryos by inserting human stem cells into animal embryos.

The extension of pre-implantation diagnosis (PGD), i.e. prenatal screening with a view to the destruction of embryos carrying certain chromosomal abnormalities (such as trisomy 21) would be allowed, for openly eugenic purposes.

In the same spirit, the Special Bioethics Committee of the National Assembly would allow the self-preservation of oocytes (without medical reason) in order to encourage women of childbearing age to postpone their plans for motherhood… by medically assisted procreation. It validated the “drug baby” technique, which consists in allowing the birth of an embryo free of abnormalities in order to use its cells to treat a brother or sister. It voted to abolish the one-week reflection period before a “medical abortion,” which can be performed up to birth. Finally, it provided for the automatic transcription of the civil status of children born abroad to a surrogate mother.

Under these conditions, who would not be afraid of such manipulating of the human being, reduced to a commodity available for the selfish desires of a privileged minority which weighs heavily on the market, or for the purposes of medical research, while at the same time they claim to be deploying so much energy towards safeguarding animal species in the name of protecting the environment? How can we fail to show our indignation at what appears to be a forced passage in the midst of summer sluggishness, when, after the ordeal of confinement, the French are seeking relaxation and an escape from everyday life? It is even to be feared that the psychosis fostered by the media-political establishment around a hypothetical second wave of the epidemic, leading to the authoritarian implementation of disproportionate means to fight the pandemic, will serve to divert the attention of citizens from these low political manoeuvres. Why indeed did the Prime Minister, in his General Policy Address, fail to mention the draft bioethics law, when it is being dealt with as an emergency in the National Assembly? The conscience of our contemporaries must surely be heavily numbed that they can no longer appreciate the seriousness of transgressions that are so destructive of human dignity, particularly that of the most vulnerable? Will we be allowed to offend the Creator in His plan of wisdom and love for a very long yet?

In his encyclical Evangelium vitae, on the value and inviolability of human life (25 March 1995), Saint John Paul II wrote, commenting on the epistle of Saint Paul to the Romans :

“A large part of contemporary society looks sadly like that humanity which Paul describes in his Letter to the Romans. It is composed ‘of men who by their wickedness suppress the truth’ (1:18): having denied God and believing that they can build the earthly city without him, ‘they became futile in their thinking’ so that ‘their senseless minds were darkened‘ (1:21); ‘claiming to be wise, they became fools’ (1:22), carrying out works deserving of death, and ‘they not only do them but approve those who practise them’ (1:32). When conscience, this bright lamp of the soul (cf. Mt 6:22-23), calls ‘evil good and good evil’ (Is 5:20), it is already on the path to the most alarming corruption and the darkest moral blindness.”

“And yet,” he continued, “all the conditioning and efforts to enforce silence fail to stifle the voice of the Lord echoing in the conscience of every individual: it is always from this intimate sanctuary of the conscience that a new journey of love, openness and service to human life can begin.” (n. 24).

There is no lack of men and women of good will, whose conscience is upright, and who by their witness, sometimes their heroic witness, will contribute to the Awakening of consciences.