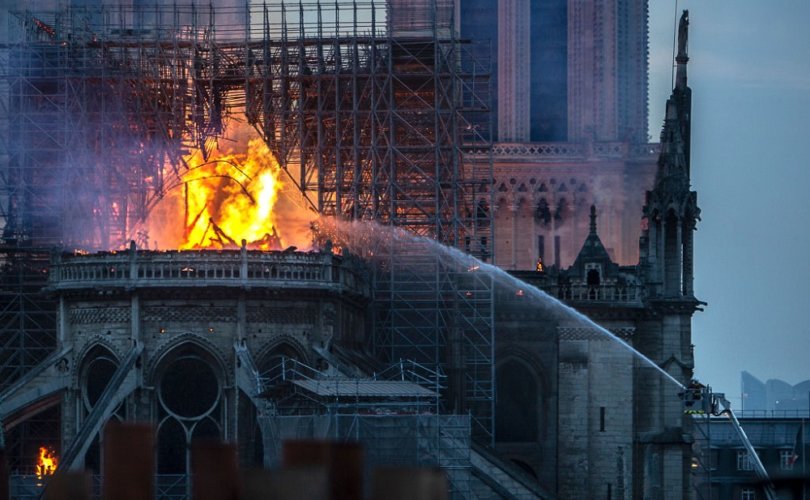 August 14, 2020 (LifeSiteNews) — A Rwandan refugee who had been employed as a caretaker has confessed to starting the July fire at Nantes Cathedral, for reasons that remain obscure. The causes of the terrible 2019 fire that severely damaged Notre Dame in Paris may never be known. Fires can start for all kinds of reasons, but there is sadly a pattern of Catholic churches in France being deliberately burned down by people with a hatred for the Church and the Faith. There are, indeed, about 1,000 attacks a year.

“Something is happening in French society that's long been neglected but is  becoming evident with these fires”, said Stefan Lunte, secretary-general of Justice and Peace Europe. “The country is becoming de-Christianized, and there are people who wish, for whatever reason, to vandalize and destroy Christian symbols … The long-held strategy of keeping this under wraps simply does not work”.

The Justice and Peace movement is not normally associated with wild claims about culture wars, and as an adviser to the Commission of Bishops’ Conferences of the European Community, Lunte must be familiar with the safe and stodgy institutional mainstream of the Catholic Church in Europe. He is clearly fed up with it.

He continued, in an interview with a German Catholic radio station, domradio.de: “There are Satanist cults here [in France], as well as very extreme anarchist and libertarian groups, people often quite unstable psychologically.” Perhaps he thought it diplomatic not to mention individuals and groups inspired by some version of Islam, but clearly, they are also playing a part in this, both in France and internationally.

What do Satanists, anarchists, extremist Libertarians, and Islamist terrorists have in common? It is difficult to think of anything except a common enemy: the Catholic Church. For some of these, a historic cathedral represents civic pride, for others a particular conception of French identity. Others would see any Catholic church or recognizably Catholic cleric or religious as a symbol of the Church’s teaching on abortion and contraception, others again a rival and sacrilegious religion. This still doesn’t explain this phenomenon. Arsonists and vandals could be attacking museums and civic buildings, police stations, or government officials. To an extent, they do. But the Church and individuals associated with her have a special characteristic that attracts their attention. They are a soft target.

One aspect of this is that churches can be difficult to make secure. But more important is the Church’s reaction, which Lunte referred to as “keeping this under wraps.” The reaction of bishops and Catholic commentators to these attacks has consistently been to play them down and to ignore them as a pattern, something the secular media are only too happy to help them do.

Terrorists of all kinds want to make a point and are no doubt pleased when this is amplified through the media. However, their atrocities also create a reaction, often undermining sympathy for their cause and generating it for their victims. This is a game the victims of injustice can win. As things are, these constant attacks on the Church are clearly not being discouraged by this doormat attitude. On the contrary, the perpetrators are encouraged in their project of destroying the dignity, prestige, and sense of historical permanence the Church has, particularly in historically Catholic countries like France. These attacks are so frequent now that few French Catholics can have failed to notice them happening locally, and the media silence around them powerfully sends out the message that no one cares — not even, it would appear, the bishops.

What is true of France is true to a degree in many other countries, and the way things are going, the similarity looks set to increase. Catholic leaders seem concerned to create the impression that to be associated with the Church is not only to be linked with clerical sex abuse, but to risk life and limb in some atrocity that will cause pastors and society at large no more than a shrug. Their message about the dignity of Catholic churches and the lives of Catholics turns out to be the same as the terrorists’.

‘Turning the other cheek’ (Matt. 5:39) is not about giving up the Church’s holiest possessions to be abused and profaned: that’s called “casting your pearls before swine” and is something we are told not to do (Matt. 7:6). Still less is it about exposing the weakest of our brothers in Christ to attacks on their faith and even on their lives; that’s called “scandalizing the least of these,” which Christ warns us will be punished by God (Matt. 18:6). It is, rather, about not making our pride our guide in seeking revenge. It is time bishops admitted they have made a mistake and started protesting about the victimization of those under their charge.