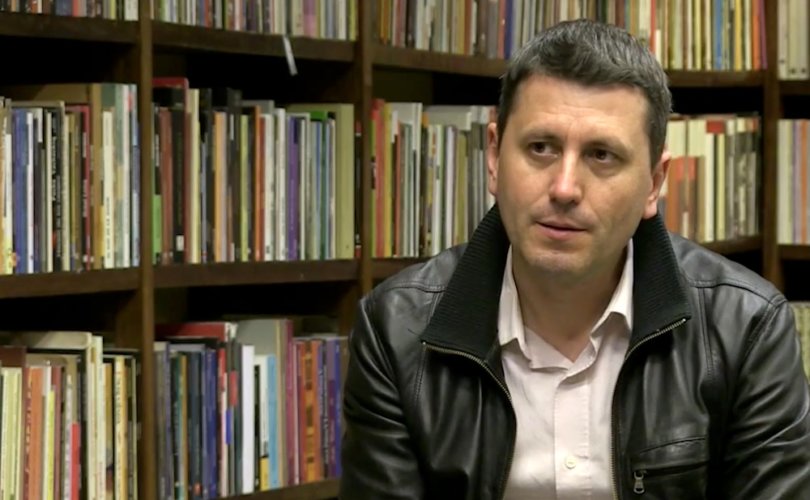 January 22, 2019 (LifeSiteNews) – A leading French sociologist has penned a book sympathetically portraying the presence of active homosexuals among the Roman hierarchy and among prelates worldwide. He has presented Pope Francis as a fearless leader who “unlocked the Closet” to allow homosexuals a place in the Church.

Dr. Frédéric Martel’s book In the Closet of the Vatican: Power, Homosexuality, Hypocrisy is set to be published on the same day (February 21) as the launch of the Abuse Summit in Rome, where presidents of the world’s nearly 130 bishops’ conferences will gather with Pope Francis to discuss clerical sex abuse.

The driving force behind Martel’s book is that the Church must accommodate homosexuality and accept openly homosexual priests.

One unintended consequence of the book, however, is that it may help confirm claims of Archbishop Carlo Maria Viganò concerning a homosexual network in the Church. In an October 2018 letter, Viganò claimed that the “underlying reason why there are so many victims” of clergy sex abuse is because of the “corrupting influence of homosexuality in the priesthood and in the hierarchy.”

“This is a crisis due to the scourge of homosexuality, in its agents, in its motives, in its resistance to reform,” Viganò continued. “It is no exaggeration to say that homosexuality has become a plague in the clergy, and it can only be eradicated with spiritual weapons.”

The whistleblower said it was an “enormous hypocrisy” to condemn the abuse and “claim to weep” for its victims and yet not address the “root cause: homosexuality.”

As the journalist Giuseppe Nardi reported on Katholisches.info in German, Martel aims at rebuking the Catholic Church for her “hypocrisy.” The book has more than 500 pages and will be published in English by Bloomsbury in the U.S., as well as in Italian and Spanish versions.

Nardi noted that Martel is a liberal homosexual who writes from a liberal viewpoint.

According to the introductory remarks from the publisher, this new book “exposes the rot at the heart of the Vatican and the Roman Catholic Church today.” Martel has worked for four years on this story and has interviewed many influential figures in the Catholic Church. He is also internationally well connected. He is the author of The Pink and the Black, Homosexuals in France since 1968. A 2012 French book of his bears the title Global Gay: The Long March of the Homosexuals (Global Gay: La longue marche des homosexuels). Martel holds a Ph.D. in social sciences and has worked for the French government in different diplomatic positions and in different countries. He currently is a senior researcher at the Zurich University of the Arts in Switzerland.

Martel claims to be able to shed light on purported “plotting against Pope Francis,” but also on the earlier resignation of Pope Benedict XVI, as well as on the current sexual abuse crisis and the lack of priests. The author wishes to reveal a “clerical culture of secrecy which starts in junior seminaries and continues right up to the Vatican itself.” For him, “it is based on the double lives of priests and on extreme homophobia.”

As Nardi reported, Martel intends to publish “names, dates, and facts concerning the nature and influence of the homosexual network in the Vatican. The author intends to address in his book what he called a “'pink elephant' in one's own living room that is not being acknowledged.”

Martel said that a “homosexual Camarilla” exists in the Vatican and which goes back to the time of Pope Paul VI. According to Nardi, the book will also deal with topics such as “corruption,” contacts to “totalitarian regimes,” and “obscure financial and real estate transactions.”

The author's sympathy clearly lies on the side of the homosexuals. He hopes by means of his work to stop the secrecy around this topic in the Church. Despite this, however, the revelation of more facts and fuller truths about homosexuality within the Catholic Church will be of interest to faithful Catholics who are trying to put all the pieces of the abuse crisis puzzle together.

One main problem with Martel's work is that he holds that the “more a prelate is homophobic, the more likely it is that he is himself gay.” This premise could have the effect of fostering suspicion among faithful Catholics toward those few prelates who still defend the perennial moral teaching of the Church – something that each and every Catholic bishop in the world is called to do. That is to say, that any prelate who still opposes the practice of homosexuality as a violation of God's Commandments might himself be regarded as a hidden (or latent?) homosexual.

The publisher's description of the book quotes Pope Francis as influencing the author.

“'Behind rigidity there is always something hidden, in many cases a double life.' These are the words of Pope Francis himself and with them, the Pope has unlocked the Closet,” the description of the book states.

It remains to be seen if Pope Francis will react to the book once it is published. Such a book could easily be used by Church leaders to promote liberalizing the Church's strong condemnation against homosexuality. It was only a month ago that Cardinal Reinhard Marx had made it public that Pope Francis is open to discussing the Church's morality.

“No one can claim to really understand the Catholic Church today until they have read this book. It reveals a truth that is extraordinary and disturbing,” states the introduction to In the Closet of the Vatican. If the book reliably reveals more truth about the homosexual networks in the Catholic Church – which has come more to light since the summer of 2018 – then every faithful Catholic should be fearfully interested in reading about it.