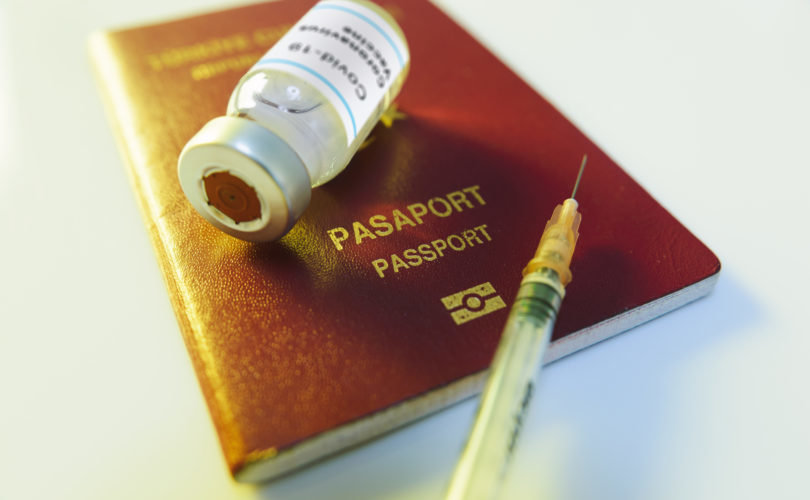 March 19, 2021 (LifeSiteNews) — Almost three of four respondents to an official online survey by the French Conseil économique, social et environnemental (CESE) are “strongly opposed” (67.1 percent) or “opposed” (5.6 percent) to the implementation of a COVID vaccination passport at a national level in order to gain access two venues that have been closed during recent lockdowns.

The results, published Wednesday, showed that a large majority of the 110,507 voluntary participants are opposed to passports for various “nuanced” reasons. A scant 20.2 percent were “strongly in favor” of such a passport, and 5.1 percent were merely “in favor.” The remaining 2 percent were “not sure.”

When the survey went online February 17, fears were raised about a possible hidden objective, which was trying to show wide popular support for a vaccine pass in order for citizens to return to bars restaurants, cultural venues, festivals and the like that have been closed or severely restricted for the greater part of the last 12 months.

Whether these fears were justified or not, the outcome could be interpreted as a massive rejection of a similar plan that French President Emmanuel Macron himself greenlighted on February 25. After a video conference with leaders of the 27 members of the European Union about the COVID-19 crisis, Macron suggested the creation of a “sanitary pass” to provide access to cultural venues and restaurants. The idea was to register people coming into an auditorium, a cinema or a restaurant in order to facilitate contact tracing while at the same time requiring proof of vaccination or of a recent negative COVID-19 test.

This is not quite the same as a vaccination passport actively being worked on by the European Commission that would be a condition for international travel within the European Union. The EU hopes to implement such a “digital green certificate” by summer. This would also include a provision for a recent negative COVID-19 test or proof that the traveler has recovered from COVID-19.

The survey conducted by France's Economic, Social and Environmental Council – a constitutional advisory assembly that intervenes in the legislative process on an optional or compulsory basis depending on the laws under discussion – went a step further. It suggested that the vaccine itself could be required in order to recover freedom of movement and the possibility to return to social and cultural meeting places.

After a year of closures, ever-changing, often contradictory or absurd restrictions and increasing weariness regarding measures that have not fulfilled their purpose – a new four-week lockdown starts at midnight Friday in the greater Paris region and the north of France – the idea that a vaccination passport would allow more freedom of movement could theoretically have encouraged respondents to approve the idea. This did not happen, and the majority of objectors is large enough to show that the French are clearly afraid of the consequences of such a system.

Besides the “closed-ended question” regarding the desirability of a vaccination passport in order to access places that are currently closed, the CESE also gave respondents the opportunity to explain why they were for or against the scheme.

Given the high number of respondents between February 17 and March 7, the survey's closing date, the CESE monitored about a fifth of the reasons and offered a synthesis that it said showed opponents had a more nuanced approach and a larger number of arguments than proponents of the vaccination passport. These mostly argued that the vaccination passport would allow locations currently closed to open again, to reopen travel and to allow citizens to recover their freedom.

To a lesser degree, these respondents added that the vaccine would lead to controlling the epidemic and that receiving it is a social duty. Many remarked that the passport could only be implemented when all people who want it will have received the shot.

Opponents noted that the passport would violate individual liberties and would set up discrimination among citizens, while at the same time the efficacy and safety of available vaccines have not been proved. They questioned the legality and even the constitutionality of such a document and foresaw “segregation” between the vaccinated and the unvaccinated, including those who for medical reasons should not get the jab, such as people with allergies or pregnant women.

Violations of freedom of movement, of private life, of being allowed to make your own choices about your own health were massively quoted, as well as the violation of medical confidentiality.

Some said that they were not prepared to present a document in order to enter into public places.

More noted that the vaccine would not put an end to the health crisis because vaccinated people can still carry the virus, because the virus does not stop variants, and because in any case, most contagion occurs in the private sphere.

Large numbers of respondents also stressed that developing treatments and fostering prevention in order to reinforce immunity among the population would be much more useful.

One of the other concerns that came up regarding the vaccination passport is the question of who would have authority to check compliance.

On March 12, the Belgian daily Le Soir reported that the catering industry federations of Brussels and Wallonia (French-speaking Belgium) will definitely not control vaccination passports when these are set up by the authorities.

“We will not sell our soul to the devil! COVID-19 cannot in any way alter our primary and essential mission of hospitality. Our doors must remain open to all, without discrimination, whether it be health-related or of any other kind,” the federations made clear in a statement.

They added, “We are impoverished and starved by the situation, but we will never substitute ourselves to the control authorities. We have neither the desire, nor the skills, nor the means to do so. We will not in any case offer any collaboration to this kind of processes that offend us practically and above all ethically,” said the organizations at the end of a meeting held Wednesday.

The reopening of the sector is currently scheduled for May 1 in Belgium. In France, no date has yet been set.