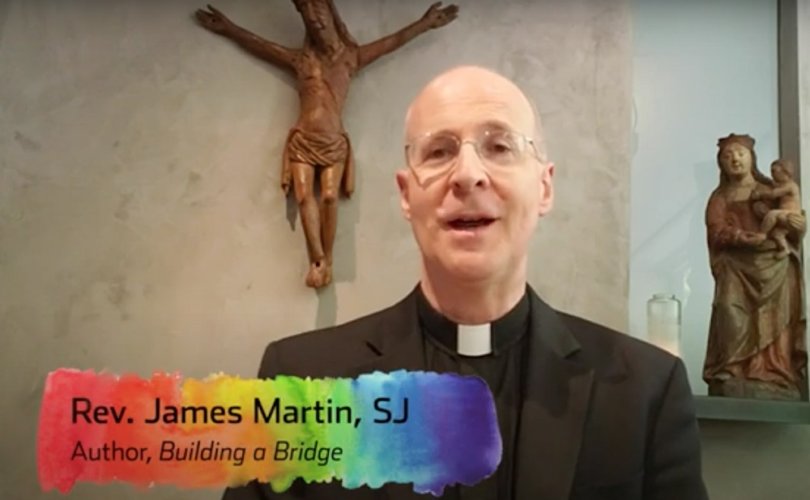 July 2, 2020 (LifeSiteNews) — In a video produced by Fordham University after the coronavirus pandemic forced it to postpone its planned “Outreach 2020” conference for “LGBTQ Catholics,” perhaps the most alarming revelations come within the first 30 seconds.

“We were all ready to go,” exclaims Fr. James Martin, S.J., “with the support of Cardinal Timothy Dolan, the Archbishop of New York; Fr. John Cecero, the Jesuit Provincial of the USA, Northeast Province; and Fr.  Joe McShane, the president of Fordham University.”

The 43-minute video features many of the speakers who would have participated at the Jesuit-run Fordham University event.

The speakers offer one lie and false hope after another, often employing misapplications of Scripture to do so.

“LGBT Catholics, the cornerstone to our Church”

“LGBT Catholics in many ways are like Jesus, and that’s why they are a gift to our Church,” began Ish Ruiz, a religious studies instructor at San Francisco’s Sacred Heart Cathedral Prep.

Transgender Catholics are on a “sacred journey”

Sister Luisa Derouen, O.P., a Dominican sister and “minister to the transgender community,” said transgender Catholics are on a “sacred journey” through whom God acts.

Bishop: Pro-LGBT Catholic ministers follow in the footsteps of Jesus

Archbishop John C. Wester of Santa Fe said it saddens him to think that “so many of our fellow Catholics experience isolation, loneliness, and even depression on an almost daily basis because of their sexual orientation or gender identity.”

In 2018, Wester’s archdiocese hosted a conference in Albuquerque run by a dissident priest organization with the bishop’s full support.

The conference, which was put on by the Association of United States Catholic Priests (AUSCP), featured Wester as its episcopal moderator.

AUSCP has advocated for homosexuals to be admitted to the priesthood contrary to Church teaching, championed the ordination of married men, and pressed for the “ordination” of women to the diaconate.

In the Outreach 2020 video, Wester said pro-LGBT Catholic ministers “are truly following in the footsteps of the Good Shepherd.”

LGBT activists are transforming the Church from the bottom up

“I’m a gay Catholic, theologian, and a member of Out at St. Paul, the LGBTQ community of St. Paul the Apostle of Manhattan,” said Jason Steidl, lecturer, Religious Studies Department at St. Joseph’s College in Brooklyn, New York, who reports that “[w]e’re transforming the Church from the bottom up.”

“We’re sowing seeds for LGBTQ ministry that will yield a bountiful harvest for years to come,” said Steidl before suggesting that Catholics should offer LGBTQ young people “affirmation.”

LGBT Catholics “are a beacon of hope”

Fr. John Cecero, provincial superior for the Jesuits of the USA, Northeast Province, urged people to follow the advice that fellow Jesuit Fr. James Martin has offered in his writings.  Martin authored Building a Bridge: How the Catholic Church and the LGBT Community Can Enter into a Relationship of Respect, Compassion and Sensitivity, which has been slammed by orthodox commentators and debunked by chaste same-sex attracted people.

“I would encourage you to face the kind of hatred that exists in all forms of homophobia in our Church,” said Cecero, suggesting that Catholics often don’t understand LGBT individuals.

LGBT Catholics “are a beacon of hope for us,” he concluded.

God creates some to be homosexual and transgendered

Megan Fox-Kelly, associate chaplain and director of retreats at the College of the Holy Cross in Worceter, Massachusetts, hinted that some students at her school are created by God to be homosexual and transgender and need to be affirmed in those identities.

“One of the most important parts of her work has been accompanying students in the LGBTQIA+ community … as they give voice to understanding their identity and the person that God created them to be,” said Fox-Kelly.

Bishop John Stowe, OFM of Lexington, Kentucky spoke similarly to those who call themselves Catholic while embracing LGBT ideology.

“June is ‘Pride Month,’” a “specific time to celebrate who God made us to be,” said Shelly Fitzgerald, former director of guidance at Indianapolis’s Roncalli High School, who was fired after the school learned she is in a lesbian “marriage.”

Priest: The Church has persecuted LGBT individuals in recent years

“LGBT-identifying Catholics have had to “somehow hold on to our faith” amid a “great persecution from Church authorities over the last years,” said theologian and author Fr. James Alison.

“It’s going to be tremendously exciting as we work out what it is to be Catholic Chrisitians at a time when so many sureties of the preconceptions are beginning to crumble away,” he continued, before blowing a kiss to viewers.

Archdiocesan DRE: Seek the wisdom of homosexual and transgender Catholics

Catholic who call themselves LGBT “are vital for all of us” and “their wisdom ought to be sought,” declared Sister Edith Prendergast, RSC, former director of religious education and the Religious Education Congress for the Archdiocese of Los Angeles.

L.A.’s controversial Religious Education Congress is billed as the biggest annual gathering of Catholics in the country and has gained a reputation for functioning as a platform for dissidents who seek to undermine Catholic doctrine on life and family issues.

Another priest, Father Bryan Massingale of Fordham University, said in the video, “I’m obviously a Catholic priest, I’m obviously a black man, and not so obvious is that I’m also openly gay.”

In the wake of the George Floyd protests, Fr. Massingale asserted that gay men who “just aren’t turned on” by black gays aren’t expressing a preference; they are revealing “prejudice.”

“This Pride [month], let us say, ‘Happy Pride’ but I also implore and plead with you to also sometime during this month to also say ‘Black Lives Matter,’” said Massingale.

Among others featured on the video are dissident nun Sr. Jeannine Gramick, S.L. of New Ways Ministry, a pro-LGBT group condemned by the Vatican and the United States Conference of Catholic Bishops, and Fr. James Allison, another “out”gay priest who rejects the Church’s teaching on homosexuality.

The entire video can viewed here or below.