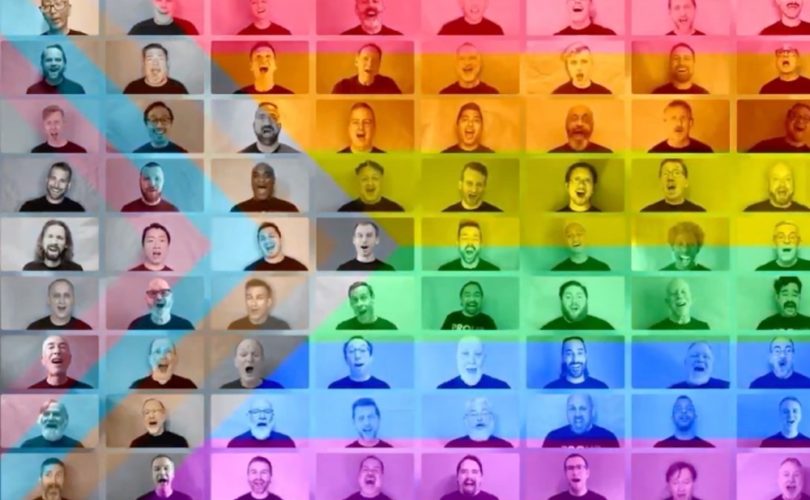 July 8, 2021 (LifeSiteNews) – Although the composer and lyricist of the San Francisco Gay Men’s Chorus controversial performance of a song – now universally known as “We’ll convert your children, we’re coming for them” – declare that their song is a parody, the message is loud and clear: We’ve conquered, we’re unstoppable.

This is not parody. This is about the political power that LGBT forces have amassed, overwhelming every aspect of American culture.

These are not victims of a heteronormative society pleading for acceptance or to be left alone; this song, published on social media on July 1 – the day after “pride” month ended – is both a victory lap and a final shot across the bow.

These are arrogant conquerors who, despite their after-the-fact protestations, are letting it be known that the rainbow flag has been firmly planted in American culture, eviscerating science, nature, and morality by rejecting the immutable truth of complementarity.

We have a message for you:

You think that we’ll corrupt your kids, if our agenda goes unchecked.

Fine. Just this once, you’re correct: We’ll convert your children … There’s really no escaping it.

Why would they unselfconsciously declare “There’s really no escaping it?”

Because it’s true. Activist homosexuals and transgenders have ostensibly won this war.

This song is a warning to Christians, and to all reasoning men and women: An all-out assault on complementarity has been going on for many years and, despite having gained much ground, ceded by our courts, legislatures, and many important social institutions, the LGBT lobby is not through. They will not stop until sodomy reigns over Christianity and other religions, and the differences between male and female are erased.

Their prime target for propaganda is children. Keep in mind: One last frontier they have yet to conquer is adult-child or adolescent sex, but it is within their sights and there are plenty of men outside the LGBT world who would also like to see legal prohibitions against pederasty and pedophilia lifted.

The contempt these men show towards parents who don’t think like them is at the heart of this. The taunting that says, whatever your religious beliefs, we are going to steal the hearts and minds of your children, and there is nothing you hicks can do to stop us. It gives the game away. It gives the game away for them, and for all their corporate allies.

Dreher is correct in that the song “gives the game away,” but I think that was the intention all along. They are unafraid. They are proud. And they are determined to do precisely what they sang about.

I am a former member of the Gay Men’s Chorus of Washington, D.C. who cringes at the lyrics – the battle cry – of this song. Don’t dismiss it. Don’t forget it. Don’t let them try to send it down the memory hole.