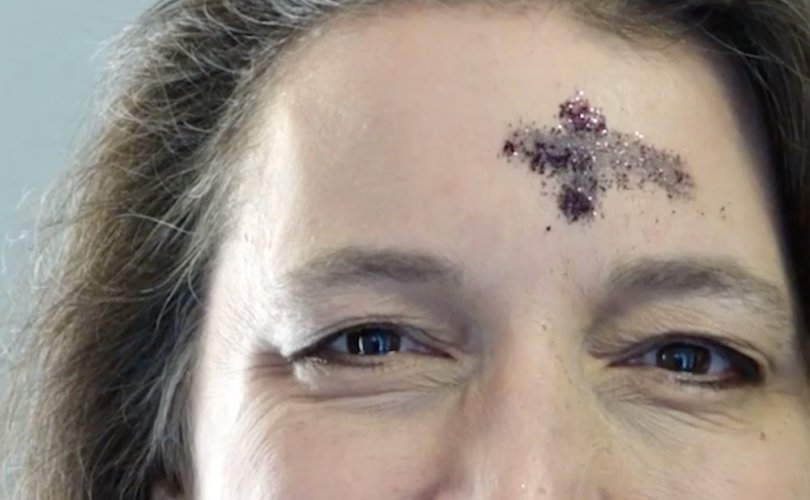 March 7, 2019 (LifeSiteNews) – LGBT and other progressive activists around the country are now co-opting Ash Wednesday, substituting “glitter crosses” for ashes in order to make sure that homosexuals are celebrated as “fabulously made.”

“Glitter Ashes lets the world know that we are progressive, queer-positive Christians,” according to a statement by Parity, a New York-based advocacy group. “We are in the pews, in the pulpits and giving glitter ashes in the street to those who either may not have time to go to a church – or may have been rejected by a church.”

Through “glitter ashes” the group hopes to promote a more “inclusive Christian message.”

The Glitter Ash Wednesday movement, which began in 2017, is just one more example of how LGBT ideology seeks to redefine Christianity, elevating its message above the message of the Cross of Christ.

Not content with having won the right to same-sex “marriage” in 2015, gays have gone on to force bakers, florists, photographers, and other wedding service providers – despite their religious beliefs and consciences – to use their talents to serve gay “nuptials.”

“Glitter is an inextricable element of queer history,” explains Parity, while warning, “The public face of Christianity is often a face of intolerance – especially toward LGBTQ people.”

“Glitter is a sign of our hope, which does not despair,” according to Parity. “We make ourselves fabulously conspicuous, giving offense to the arbiters of respectability that allow coercive power to flourish.”

All this goes to show that the colorful glitter ashes deliver a message that stands in opposition to Ash Wednesday.

Replacing the true message of the Cross with fabulous glitter

The glitter crosses disfigure and deform the meaning of Ash Wednesday crosses received in church, which are an expression of repentance.

As the priest applies the ashes to our foreheads, he says: “Remember, O man, that you are dust, and unto dust you shall return.”

The ashes remind us of our need for salvation, not celebration. Pro-LGBT forces are at work to change the meaning of Lent from repentance from sin to a celebration of “gay pride.”

What I wrote on the very first Glitter Ash Wednesday two years ago is more evident today than it was then:

As it turns out, the ever-expanding universe of gay “rights” isn't about equality; it's about establishing superiority. It's not about peaceful coexistence, acceptance, or tolerance; it's about changing and undermining the fundamentals of faith and family by diluting immutable definitions. As for same-sex “marriage,” it has always been a misnomer, a smokescreen. What we're really dealing with is anti-complementary, anti-conjugal, genderless couplings.

Glitter ashes are not a sign of solidarity with Christian churches, but they are indeed a sign.

They signal a broad occurrence within churches: Dilution – just one more step toward diluting, if not eviscerating, the very heart of the Gospel.