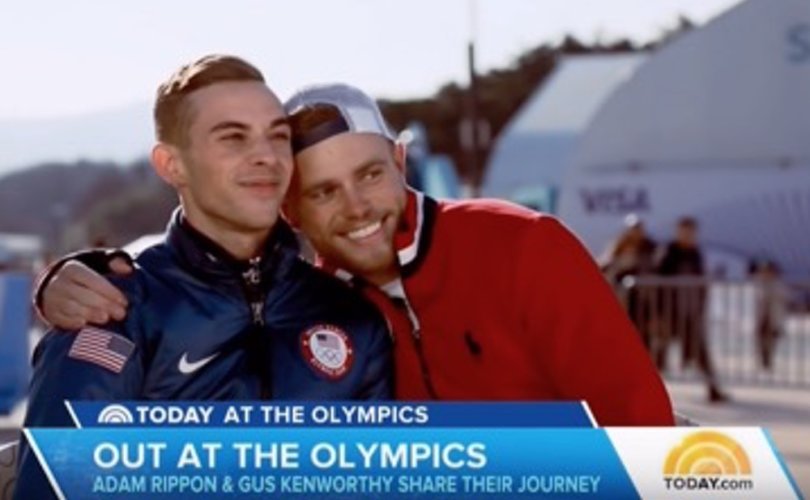 Granted, that was embedded within a larger pro-gay statement. But it was a kernel – a gem – of truth that slipped out of Kenworthy’s mouth.  We’re pretty sure that’s not what he meant to say, but that’s what popped out as millions listened.

In Washington DC, a “gaffe” is humorously defined as “when a politician accidentally tells the truth,” while trying to promote his or her prefered narrative about an issue. As it turns out, gay celebrities are just as prone to gaffes as politicians:

My boyfriend and I had a kiss at the bottom of the contest and people were like, ‘we get it, we don’t need to see it though. I don’t care what you do it behind closed doors, but don’t put it in my face.’ And it’s kind of like, my entire life – in movies and commercials, in public – everywhere you see straight heterosexual love and that’s completely fine because it's normal, but us also showing the same type of affection isn't shoving it in your face. It's just existing.

Yet NBC’s coverage wasn’t simply showing something that is “just existing.” It was strategic: it was meant to push the envelope.

NBC devoted precious, extremely expensive airtime to normalizing homosexuality on its national and worldwide television coverage of the Olympics.

Coverage of this year’s Winter Olympics: worst in TV history

Winter Olympic television viewership is down. Way down. In fact, it has been declared to be the worst-rated in Olympic television history.  The Drudge Report’s two big headlines, stacked one on top of the other over the weekend were “WORST RATED OLYMPICS EVER” and, “NBC $12 BILLION BOONDOGGLE.”

Why did ratings plummet? Simple: