The shift in identity has scared off some corporate sponsors.

June 5, 2017 (​LifeSiteNews​) – The theme of gay pride parades around the country this year will make a dramatic switch from celebrating homosexuality, trangenderism, and all the recent LGBT judicial wins to a militant call to resist what organizers regard as oppressive societal and government forces.

Parades will no longer be parades; they are "resistance marches." It seems switching parade identity is as easy as switching gender identity.

And why the sudden urgency to beat plowshares into swords? No one seems to be able to articulate the call to arms clearly. It appears many folks are still unhappy that neither Hillary Clinton nor Bernie Sanders won the 2016 election, and that because a white male with a beautiful wife occupies the Oval Office, the country is in grave danger. It’s as if a terrorist, not a patriot, has moved into the White House.

Birth of a Notion

After witnessing the large crowds of protesters drawn to the pro-abortion Women’s March on Washington, D.C., last January, one day after Trump’s inauguration, Los Angeles entrepreneur Brian Pendleton had an idea.

“Floats and marching bands are nice when we are not at war,” he wrote. “Now is the time we shake things up and take to the streets.”

The idea caught on in other locales.

Planned ‘Resist Marches’ join several streams of protest and dissatisfaction coalescing under a single banner of "Equality March for Unity and Pride." Recent examples include "the science march, the climate march, the women's march, the immigration march," according to Anika Simpson, co-organizer of the international effort.

According to event creator and organizer Pendleton, the display is about feelings, not facts. "I feel a sense of solidarity across these groups. We're lending our giant iconic rainbow flag not just to the LGBTQ community but to anyone who feels threatened."

Because of the leap from the promotion of a lifestyle to outright political action, reliable corporate sponsors of the past are pulling their support from this year’s round of events. In Los Angeles, major sponsors like Nissan, Skyy Vodka, and Wells Fargo Bank have bailed out citing corporate policies against participating in political rallies.

Steven Blum, writing at fourtwonine.com, said, “Sponsors are fleeing L.A.’s #Resist march this year out of fear of being associated with its overtly political message.” He continued, “This corporate skittishness is a new phenomenon for L.A. Pride, which has traditionally lured a bevy of well-heeled sponsors to its sequined floats.”

On the other side of the country just outside Washington, D.C., the sense of militant dissatisfaction with typical gay pride festivities is rising.

Lourdes Ashley-Hunter, the executive director of the Trans Women of Color Collective in suburban Maryland, told the Sentinel News Organization, “Pride was born of a resistance. Now it’s a parade, a festival.”

Ashley-Hunter asserts that Pride events have been co-opted by oppressive straight and gay white males as an act of violence, saying, “Anyone who sponsors a system or an organization that is actively engaging in reappropriation of the purpose of pride and revision of history is violent.”

“No Justice No Pride is a response to the way that pride has been appropriated by cis (gender), white, gay men … (and) is an alternative to the corporate glitter and glam that Capital Pride represents.”

Fourtwonine’s Steven Blum also sees a need to return to the gay movement’s counter-cultural roots. “The majority of LGBT pride parades around the world were born out of protest; one of the first public rallies in support of gay people, held in 1967 in the Silverlake neighborhood of Los Angeles, was a pointed display of defiance in the face of police brutality.”

The sense of heightened threat levels is being actively promoted.  Organizers want as many people as possible to have a sense of personal threat to their well-being.  Evidently we are at what the Department of Homeland Security might identify as ‘threat level red.’ 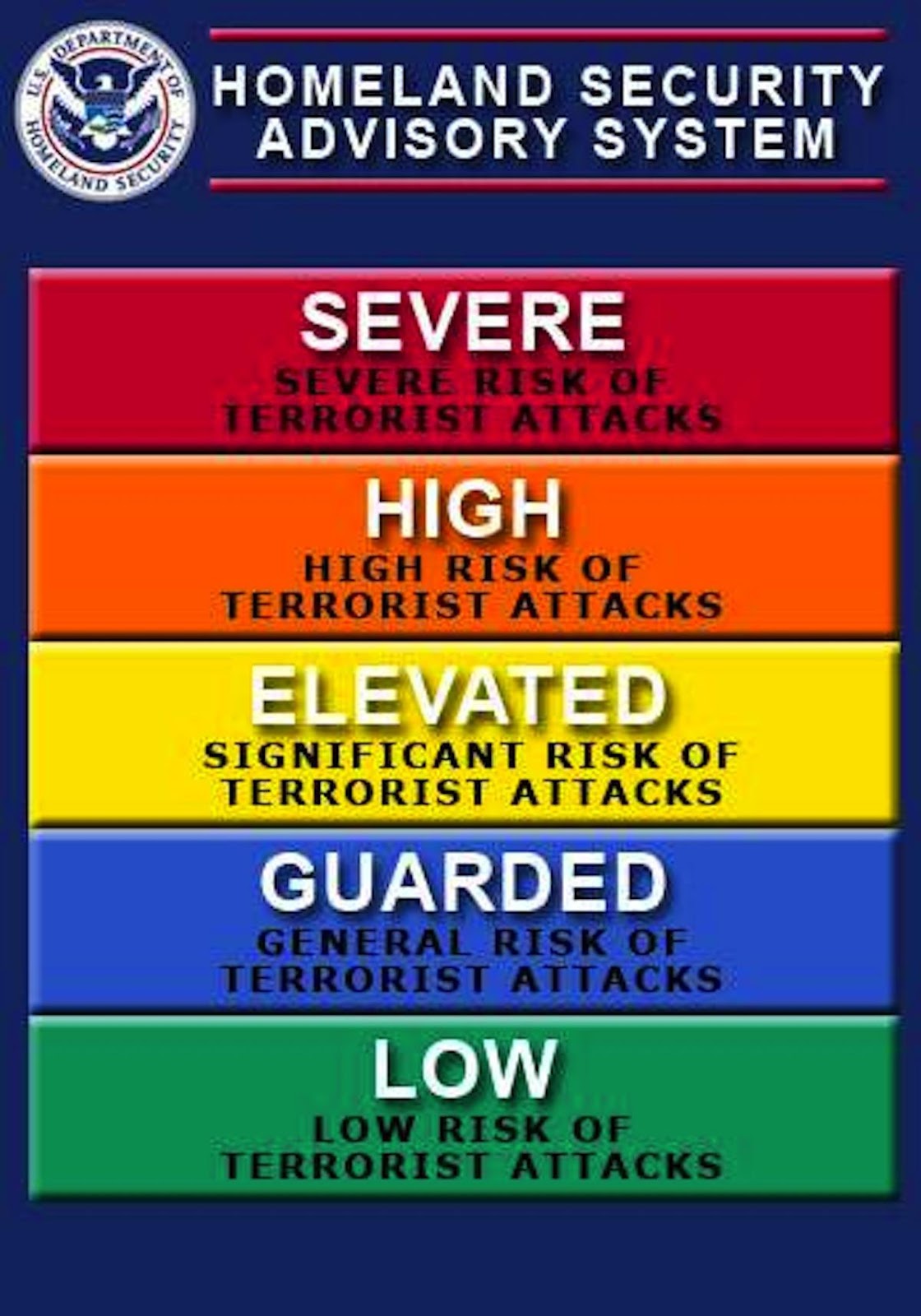 It’s interesting to note how much the alert system devised by Homeland Security looks like the LGBT rainbow flag.

An undefined threat, an amorphous enemy

The ResistMarch.org Facebook page declares, “When any American’s rights are under threat, all our rights are threatened.”

It is up to the reader to dream up who or what to feel threatened by.

Yet despite sounding alarms and making impassioned pleas for resistance, some who normally participate in pride events are unclear on what they’re being asked to do. In fact, they’re skeptical about the pride parades’ co-opting by militant gay and transgender forces.

LA Log Cabin Republicans head Matthew Craffey said, "There's no doubt in my mind it'll be anti-Republican," he said. "Resist marches across the country have a pretty focused target and that is the Trump administration."

And he’s not sure why. “There's been a lot of panic about what President Trump might do. I would just say this: We still have the right to marry; we still have all the rights when he came into office we had.”

So the question remains, “Resist what?”

The ambiguity of purpose compelling the resist marches is strategic. Even the organizers aren’t quite sure why they feel moved to take to the streets in this way. People are being pumped up with fear and dread to march not against the threat of government tyranny, but as a thinly veiled rage against the Church and the Good News of the Gospel.

The participants and organizers are playing checkers, while Satan is playing chess, using many as pawns for his anti-Christ purposes.

Winning gay marriage was not enough. Winning the right to have men use women’s and girls’ rooms is not enough. Why? Because this is about crushing the church, the suppression of faith, and the oppression of believers.