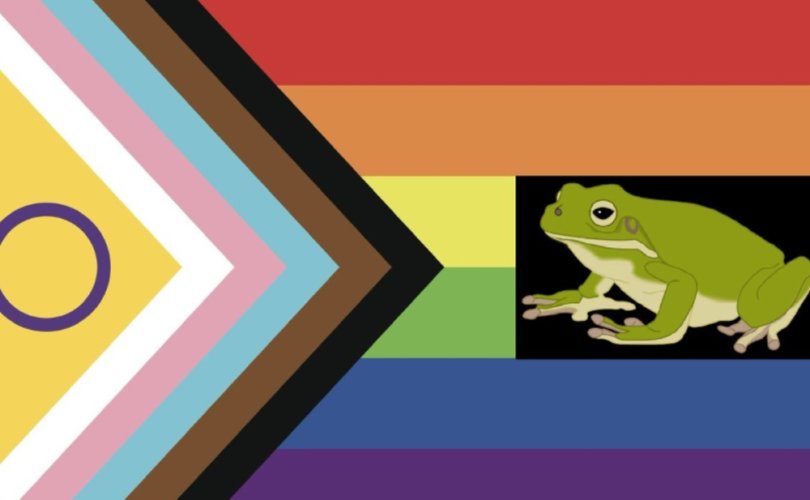 (LifeSiteNews) — The Rainbow flag — the omnipresent symbol of PRIDE waved throughout June by nearly every major corporation, professional sports league, and just about everyone else conducting business in the U.S. — has become a source of controversy and division within LGBT circles as it is endlessly crammed and overwritten with more colors and hues, stripes and shapes, to the point of becoming unrecognizable and losing its original meaning.

The U.S. Supreme Court’s June 2015 Obergefell decision preventing states from adhering to the immutable definition of marriage as between one man and woman threw open the door to transgenderism — blew the door off its hinges, actually — unleashing a catastrophic sexual identity plague upon American children and adolescents while also, perhaps surprisingly, causing upheavals within the previously politically cohesive LGBT community.

Sexual identitarians, critical race theorists, and other progressive forces are, according to conservative-and-libertarian-minded gays (GayCons), hijacking the rainbow flag in order to attain greater visibility by linking their peculiar range of psychological idiosyncrasies to the homosexual world.

An increasing number of gays resent the relentless barrage of defaced and disfigured versions of the rainbow flag.

Some iterations add pale stripes in a diagonal pattern to stake out real estate for transgenders on the rainbow flag, while brown and black stripes represent dark skinned minorities attempting to do the same. In some instances, a circle is added to claim territory for intersex persons.

Recently, the blue and yellow of the Ukrainian flag has been added — a political cause that has nothing to do with homosexuality — a clear sign that the rainbow flag is ostensibly nothing more than a blank slate for advertising the latest faddish demands of progressive social justice warriors.

— Article continues below Petition —
PETITION CONGRESS: Stop the grooming & sexualization of children in schools
Show Petition Text
6485 have signed the petition.
Let's get to 7500!
Thank you for signing this petition!
Add your signature:
Show Petition Text

The infinitely evolving rainbow flag phenomenon is an interesting example of karma, of reaping what one sows. After existing unmolested for more than four decades, the post-Obergefell rainbow flag is treated today as a bulletin board over which sexual revolutionary forces pin their cause du jour, eclipsing its intended meaning.

When the Supreme Court’s Obergefell decision was issued, it served to eclipse the meaning of marriage, riding roughshod over its inherent conjugal, complementary nature.

Marriage became devoid of meaning, reduced to a plastic term applicable to any combination of persons.

Fast forward a few years to today. A consequence of the same-sex marriage ruling unforeseen by the gays lobbying for it is that it rolled out the red carpet for the many rainbow flag mutations popping up today, just as it had mutated the immutable definition of marriage in 2015.

A recent Tweet by one young gentleman, using the handle “Gay Toad,” triggered a cascade of over 600 supportive comments illustrating the displeasure — if not outright resentment — of many intellectually honest GayCons toward the trans banner usurpers.

“Love how the rainbow is slowly disappearing lmao,” he began.

“Great metaphor of how the original gay liberation movement has been hijacked by f*cking lunatics.”

Love how the rainbow is slowly disappearing lmao pic.twitter.com/A7N7poGKaH

“It clearly shows how this is not about gays anymore,” responded @realsimonsz.

“It’s about virtue signaling. Wonderful metaphor how gays are being erased,” he added.

It clearly shows how this is not about gays anymore.

It’s about virtue signaling. Wonderful metaphor how gays are being erased.

“Like minorities and women before them,” added another Twitter user. “They always throw the old dog away for the new puppy.”

“It’s funny [because] it literally is an accurate  depiction of the LGBT movement today… being engulfed by something totally different,” noted Mikey Sciarrino.

Yep. CRT & Gender Ideology driving a wedge into the movement, dividing it.

“If a rainbow isn’t inclusive enough, why not take that horrid triangle thing and make their own flag with it?” wondered DelilahM.  “No need to erase LGB people to validate yourself.”

“They wouldn’t be able to use it as a political bludgeon,” answered Frank Ireman.

They wouldn’t be able to use it as a political bludgeon.

“The entire visual is aggressive and ominous, and it’s designed to be that way,” she continued. “The LGB part is too gender-oriented for the TQA+ part and it will be erased.”

It’s not just disappearing. It’s being attacked. The entire visual is aggressive and ominous, and it’s designed to be that way. The LGB part is too gender-oriented for the TQA+ part and it will be erased.

“It’s a sick irony, the way that the pride flag has developed. Once, it was a symbol for equality, for everyone. Then, as time went on, people changed. ‘Neogenders’ popped up, people wanted more than equality, they wanted power. Corporations hijacked the movement for profit,” explained @yaboijoshu in a two-part Tweet.

“And as this all occurred, those who still stood by the original message, the gay men and women who just wanted to be equal, were covered up and pushed away from their very own movement,” he concluded.

its a sick irony, the way that the pride flag has developed. once, it was a symbol for equality, for everyone. then, as time went on, people changed. “neogenders” popped up, people wanted more than equality, they wanted power. corporations hijacked the movement for profit (1/2)

“Soon, they will annex yet more space for the asexual spectrum colors,” averred Craig S. Bell, captioning a chart displaying the ever-expanding range of asexual identities.

Soon, they will annex yet more space for the asexual spectrum colors. pic.twitter.com/jE4Y7luyy7

Twitter user Austin Gemini responded with a simple graphic, declaring, “I’m done!” over the familiar letters LGBTQA+, with the T, Q, and + crossed out with red X’s.

Others used the opportunity to ridicule the marring of the rainbow flag.

“With every ‘upgrade’ it gets closer to this,” suggested UnwokeLefty, captioning a graphic drawing upon PacMan imagery showing the pale hues of the transgender movement devouring the vibrant colors of the rainbow.

With every “upgrade” it gets closer to this pic.twitter.com/ftQ69JlGdR

“I think we should include frogs in the pride flag, mostly because everything else is already included,” teased @czarnages.

I think we should include frogs in the pride flag, mostly because everything else is already included, but also because amphibians are the group of vertebrates which are facing the most serious threat of mass extinction. This means that everyone is more privileged than frogs. 😰 pic.twitter.com/10OubK5amf

Obergefell’s undefining of marriage — defacing marriage certificates by replacing the words “husband” and “wife” with “person 1” and “person 2”— has led to what has for decades been considered by gays and lesbians venerable symbol, the rainbow flag, to also be defaced by LGBTQQIP2SAA+ forces which outright reject the reality of male and female.

That binary is as significant to homosexuals as it is to marriage, the real thing.