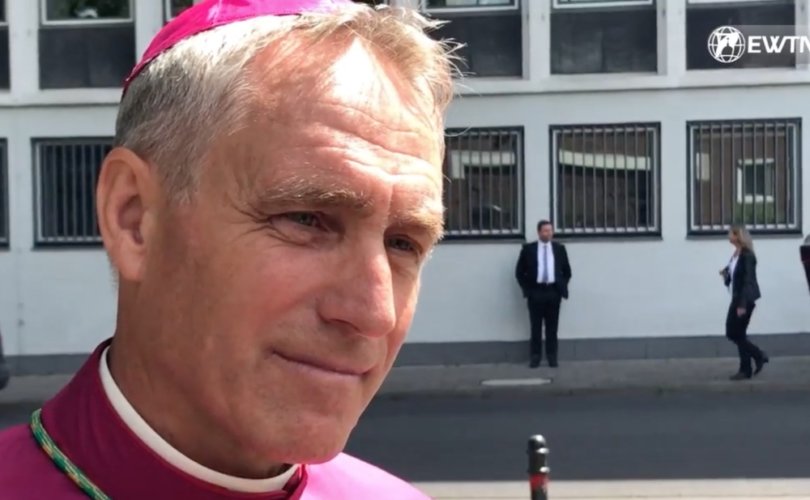 June 10, 2019 (LifeSiteNews) – In a recent speech in front of representatives of the German legal system and of Catholic and Protestant dignitaries, Archbishop Georg Gänswein – the personal secretary of Pope emeritus Benedict XVI – reminded the state representatives of the Christian roots of the German Constitution. At the same time, he stated that the German state is now in the midst of a “departure” from the “original Christian-humanistic worldview and from the natural law,” as can be seen in “same-sex marriages” and in the state's current insistence that the Church should hire “remarried” divorcees.

The archbishop pointed out that those who are living in homosexual relationships or are themselves “remarried” divorcees – and who now feel supported by the state – will finally also have to “turn old one day” and “stand before the last step” and “face God and the final judgment.”

Gänswein argued that the Church's task – and thus the task of all Christians – is to stand up “stronger and more courageously” for the truth of the Faith which once had helped build the German Federal Republic's legal system that has provided an “unprecedented peace under the law.”

“We can speak with the majority,” he explained, “only when it is about the truth, and otherwise we must witness to the truth while being in contradiction.”

Thus, Christians can make a contribution “for another truth, for another viewpoint, for an alternative concept of the essence of man,” in the midst of “relativism or the rejection of religious truths.”

The Archbishop gave his address on June 4 – the vigil of the Feast of St. Boniface, the Apostle to the Germans – in Karlsruhe to some 200 people, among them high-ranking representatives of the legal system in Germany, such as the President of the German Federal Court of Justice, Bettina Limperg, and Stephan Harbarth, the Vice President of the Federal Constitutional Court of Germany.

Gänswein claimed that the German state, more and more “urged by a passing materialistic mainstream in public opinion, deals with accidental matters of human existence.” “We, however,” the prelate continued, “have to remain loyal to the essential things and hope thereby to serve, as Christians, our homeland.”

The Church, he explained, “has to rediscover afresh her own self and thus her original salvific mission – also for the sake of the common good and for the whole of the secular society.” But the Church seems often to “have lost herself in a strife within the Church, from which even many bishops do not anymore find a way out” and, rather, act themselves “as if they were but politicians from different political parties who aim at winning the next election.” Such bishops do not act any more like “shepherds of that flock which Christ Himself has entrusted to them.”

For Gänswein, not only the state, but also the Church is finding herself at a “critical juncture.” Christians must remind themselves, he said, that the dignity of man stems from his likeness with God. God is the “Alpha of the human dignity.” That means, he explained, “that we also have to seek the proper goal of our pastoral care.” At the center of this pastoral care is to be found the Incarnation of Jesus Christ, of God truly becoming man and showing Himself to us and telling us about the way to God; but it is also important to remember that He will also return to earth.

The German prelate quoted Matthew 25:31-46 in regard to Christ's second coming, stating that the passage “shakes us to the depth of our being,” namely that God “distributes the goods of His Kingdom, as an inheritance to those whom He has recognized as 'pleasing to God.'”

“What you have done to the least of My brethren, you have done to Me,” will be the principle of discernment as to who is pleasing to God, he said. Here, God identifies Himself with the “lowliest” of all people, as He had done already in the Creche and on the Cross. It is this “unfathomable” humility of God that, in a mysterious way, laid the foundation for a civilization that recognizes the dignity of God's creatures, of man, he added.

In order to understand “why people flee to Europe and not to the Arab Emirates or to China,” the prelate continued, “one has to look upon the Child to whom we owe the most important foundation of our Christian world, which has been built so differently, with its social systems, its will for freedom and with its claim of the inviolable human dignity.”

Gänswein said that Europe's civilization, with its many legal and social advantages, is unthinkable without the Christ child in the crib Who came to die so that men and women might have life.

In this sense, Archbishop Gänswein called upon the Catholic Church “once more to make shine her own inmost light, and not only for her own sake, but for the sake of the common good.” While her charitable works are praiseworthy, he stated, “her final reform cannot succeed by becoming more social, more charitable, or even more adapted to the Zeitgeist,” but, rather, solely by “returning – with all of her experience from 2,000 years and with all the force and imagination – back to the essence of her existence,” that is: “eternal life.” This eternal life, Our Lord has opened up for us by His Death and Resurrection.

During his address, Archbishop Gänswein quoted extensively Pope Benedict XVI's own 2011 speech before the German parliament. The Archbishop ended with the following words: “The Omega and goal of the dignity of man, however, is the sanctification of man – and his being with God in eternity. This is the final horizon, in front of which alone our life can succeed.”