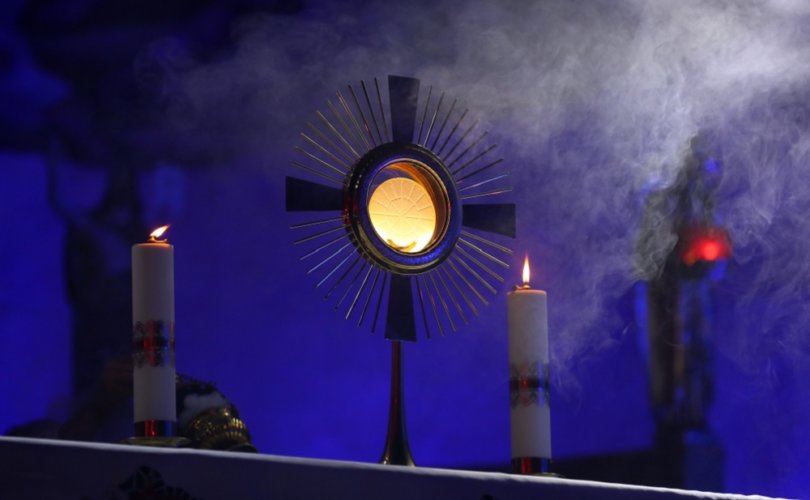 June 15, 2020 (LifeSiteNews) — The Archdiocese of Munich has endorsed a bizarre and sacrilegious website that supposedly celebrates and elaborates the message of Corpus Christi. The creators, two “pastoral advisers,” Michael Raz and Johannes van Kruijsbergen, explain (translated from German by Google):

This festival is about showing people on the spot that God is in the middle of us, in the middle of the world, at all times. The idea arose to photograph the monstrance, i.e. this vessel for showing the body of Christ, in different places of everyday life. The oral project received broad approval from the other sixty or so pastors.

And so we have photographs of a monstrance in a playground, on a roadside bench, on a pedestrian crossing, in a car, next to a building site, on a water feature in a park, and so on, with supremely un-memorable little texts to accompany each one: how our lives are bit like a building site or whatever.

It shouldn’t need to be pointed out that the Blessed Sacrament should not be carried around simply to provide photo opportunities, and it certainly shouldn’t be dumped on park benches or in the middle of a road for no good reason (see Canon 935). Nor is there any indication that it was a priest, or even a duly instituted lay person, who was manhandling this monstrance about the place, and one of the photographs shows a little boy grasping it (see Canon 943). It is a sad reflection on the state of the Church in Bavaria that the sixty pastors apparently consulted on the idea didn’t appear to notice its liturgical impropriety.

What were they thinking? The reality of Christ in the Blessed Sacrament is not referred to in the little meditations. On the other hand, the whole object of the exercise is to show (as the title of the website says) “Gott — mitten in der Welt”: “God, in the middle of the world.” It appears that the Host displayed in the monstrance was not consecrated; in any case, the monstrance is itself a sacred vessel worthy of respect. Indeed, they have presumably chosen a rather lovely traditional monstrance, and not a freakish modern one, because it is easily recognizable by the folk of once Catholic Bavaria. In one or two of the photographs, the monstrance has been placed on a corporal, as it would be in Benediction on an altar.

The Blessed Sacrament in the monstrance receives even greater honor, is treated with even greater reverence, in a traditional Corpus Christi procession than during the liturgy. Traditionally, the priest, who has the privilege of handling the Blessed Sacrament with his hands, holds the monstrance with a special cloth; he can be preceded by two thurifers, candles, and a special canopy and accompanied by a throng of people singing and praying.

How can the world be converted: by actions that profane what is holy or by actions that prompt greater reverence toward what is holy? The answer is obvious. It is a continuous battle to accord God the honor that is His due in the everyday world. Today, those committed to this struggle have to contend not only with sin and indifference, but with misguided Catholics like Raz and van Kruijsbergen, who work to reduce the honor accorded to God by the world. The pathetic image of a monstrance on a bench or road, apparently abandoned and forgotten, is a vivid symbol of the Church some progressive Catholics seem determined to create, though not in the way Raz and van Kruijsbergen intended.

The rest of us will have to work twice as hard to make up for their contrary efforts: and it is they, not us, who are supported by the vast resources of the German Church. If the institutional Church suffers financially from the epidemic, we can at least reflect on the limitations this will place on the harm, as well as the good, being done.