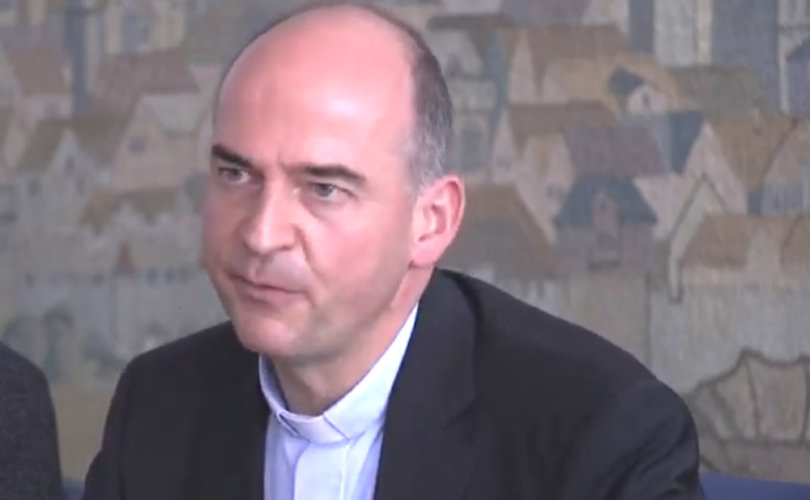 As Vatican News reported, when Bishop Jung – who was made a bishop by Pope Francis only last year – was asked whether he would witness during his lifetime that women would stand at the altar, Jung responded, “I do not know whether I will still come to witness it – but this question remains still unanswered. I think that, in the long run, this question cannot be rejected.”

Pointing to other churches, Jung stated that “the time, since women are in (ministerial) offices, is also relatively short.” That is why, he added, the “Catholic Church as a world organization” has to be given “a little more time.”

“I assume that this question will continue to occupy us, and we will have to answer it one way or the other,” Jung explained. Young people, he says, are raising in their discussions with him personally the question of “justice and participation” that lies “beyond your own theological considerations.”

He also said Pope Francis had established a commission in order to examine the possibility of a female diaconate, adding that “it is my assessment that the theological discussion will not fall silent.”

In 1994, Pope John Paul II had clearly rejected the idea of ordaining female priests. In Ordinatio Sacerdotalis, the Pope wrote: “I declare that the Church has no authority whatsoever to confer priestly ordination on women and that this judgment is to be definitively held by all the Church’s faithful.”

Ladaria insisted upon the infallibility of this teaching and commented:

In this light, it is a cause of serious concern still to see voices being raised in some countries that call into question the definitiveness of this doctrine. In order to maintain that this is not definitive, it is argued that it has not been defined ex-cathedra and that a subsequent decision of a future Pope or Council could, therefore, overturn it. Sowing these doubts causes grave confusion among the faithful, not only about the sacrament of Holy Orders as part of the divine constitution of the Church but also about the ordinary Magisterium which can infallibly teach Catholic doctrine.

Cardinal Walter Brandmüller – one of the two remaining dubia cardinals – said in 2018 that the question of female priests has been authoritatively ruled out by Pope John Paul II and that, therefore, anybody who insists upon this matter – to include the ordination of female deacons – “has left the foundations of the Catholic faith,” and “fulfills the elements of heresy which has, as its consequence, the exclusion from the Church – excommunication.”

In February, another German bishop – Gerhard Feige of Magdeburg – had said of the female priesthood that “it is not convincing anymore to rigorously reject it and merely to argue with the help of tradition” and announced that, in spite of resistance in the Church, “it will still come, however.”

Bishop Jung, shortly after his being chosen as the bishop of Würzburg, had already caused a stir by saying married priests are “conceivable” and Pope Francis himself had opened up this very debate.