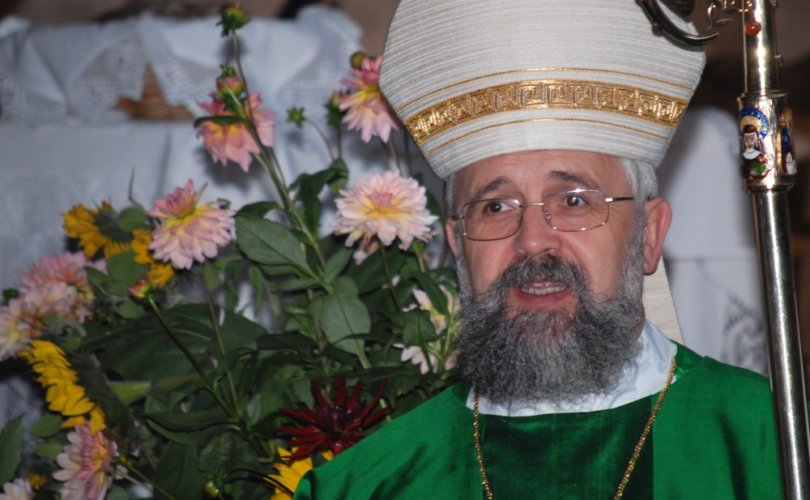 February 14, 2019 (LifeSiteNews) – A German bishop has stated that it is no longer convincing to argue against female priests because tradition does not allow it, adding that it is only a matter of time before they will come.

Bishop Gerhard Feige of Magdeburg made these comments in a Feb. 12 interview with German news service Katholische Nachrichten-Agentur (KNA). He claimed about the female priesthood that “it is not convincing anymore to rigorously reject it and merely to argue with the help of tradition.” While Feige suggested that currently the female priesthood is still improbable due to resistances in the Church, he is convinced that “it will come, however.”

“Not too long ago, I could not have imagined it this way,” the prelate added. Here, Bishop Feige referred to Pope Francis, saying that one cannot preserve the Church's teaching as is, without allowing for some development. Much has been changed in the past, and not only in details, he explained.

“Could the Spirit of God not also today lead us to new insights and decisions,” Feige said.

Commenting on the question of celibacy, the Eastern German prelate — who grew up under Communism — said he could imagine that there will be more married priests in the future. Celibacy, he said, “can over time become a burden.” He added that celibacy “is not a Divine law.” Therefore, married priests “are well possible, and they do exist already, after all –  with the same dignity and sacramentality – in the Catholic Eastern rites.” The question, however, is how the Universal Church can come to a decision in this points, Feige explained.

For him, it is important that the profile of the priest will be changed, away from an “archaic-bourgeois” style and toward a “dynamic-alternative” one. In the face of high numbers of non-Christians in his surroundings in Magdeburg, Feige argued that it is important for priests “not to instruct anyone from a superior position or to discipline him, but really to serve.”

Bishop Feige is not the only German-speaking prelate in favor of female priests. Cardinal Christoph Schönborn published last year his idea that one day there would be female priests and bishops. On another occasion, he said that he hoped for the day when he would ordain female deacons.

At the beginning of February, an auxiliary bishop from Germany, Franz Grave, also proposed to discuss the female priesthood. “We should not harm the Church by cutting her off from new forms of the priesthood,” he said.

In 1994 Pope St. John Paul II taught authoritatively that the question of women’s ordination was not open for discussion in the Church. In Ordinatio Sacerdotalis the Pope wrote:

The Catholic Church holds that women’s ordination is an ontological impossibility because being male is essential to being a priest and to the priest’s ability to act in persona Christi (in the person of Christ). Jesus was a male and ordained only males to the priesthood. The Catechism of the Catholic Church also teaches that only a baptized man can validly receive sacred ordination (CCC 1577).

“The normal Catholics — that is to say those Catholics who take the Magisterium seriously and who live in accordance with it — have the impression that in Germany, there will soon be no Catholic stone remaining on the other. In this situation, those German bishops who still remain loyal to the Magisterium, should speak up in public,” he said. “They have to give orientation to the faithful and support them in their Faith.”