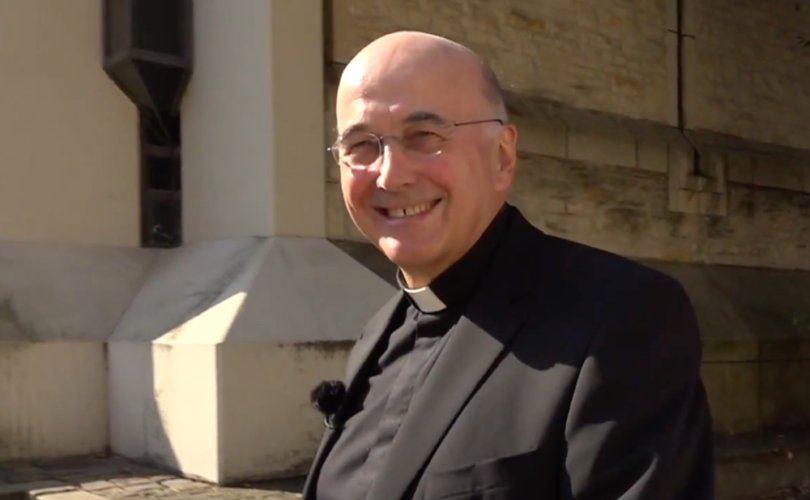 September 19, 2018 (LifeSiteNews) – A German bishop who did not stop a priest from circulating homosexual “love” stories within the diocese aimed at teens will participate in the upcoming October 2018 Youth Synod in Rome.

Last month Fr. Norbert Happe of the Diocese of Münster, Germany — under the care of Bishop Felix Genn — gave an interview in which he spoke about donating two youth books on homosexual “love” stories to a local Catholic library.

Fr. Happe, who is pastor of St. Johannes Baptist Parish in Beelen, told the regional newspaper Die Glocke in an August 24 article how he donated two books for the youth on homosexual “love” stories to his local Catholic library.

It is about time to do so, Happe said, “because also in the countryside there live homosexual people.”

The title of one of the books is Two Boys Kissing, in which two boys kiss each other over a long period of time in order to win the record of the longest kiss. The second book, titled Only Three Words (Nur Drei Worte), is also about a homosexual couple which is faced with the danger of outing themselves as homosexuals. Both books deal with homosexual “love” among boys.

The article concluded with the words “Father Happe invites all people who are interested to approach the topic of homosexuality with the help of these two heartfelt love stories. More novels shall soon find a place in a special corner in the library.”

LifeSiteNews reached out to Bishop Genn, asking him for comment and whether he has taken any disciplinary steps against Father Happe. No response has been forthcoming.

However, since this article about Father Happe's library donation and pro-LGBT words was published in German media now more than a month ago, it is to be assumed that the bishop is informed about this priest’s initiative. There has been no statement concerning this matter to be found on the diocesan website. Bishop Genn's silence in this matter is therefore perplexing and troubling, especially in light of the fact that he is currently a member of the German delegation that will participate in the October Youth Synod in Rome.

Bishop Genn does not seem to have intervened in 2014, either, when Father Happe published in his parish bulletin a whole page dedicated to the topic of homosexuality, using excerpts from an organization that helps those infected with AIDS. The first words of that page are a quote from Klaus Wowereit – a prominent homosexual politician from Berlin – who said: “I am homosexual and that is good.” The text then asks “is it only in large cities possible to live so openly as a homosexual?” It gives the answer: “No, that is everywhere possible!”

This bulletin is still available online. This fact indicates that Bishop Genn did not intervene even in 2014 when Father Happe was openly promoting in his parish bulletin material in favor of homosexuality.

In September of 2017, however, Bishop Genn did stop one of his priests from giving a public blessing to a homosexual couple. He forbade that purported blessing after there had been many voices of protest. Genn's spokesman, Dr. Kronenburg, then insisted that “the diocese is not intending to denigrate a same-sex relationship.” The diocese has nonetheless wanted to make it clear that there is a difference between a marriage and a same-sex partnership.