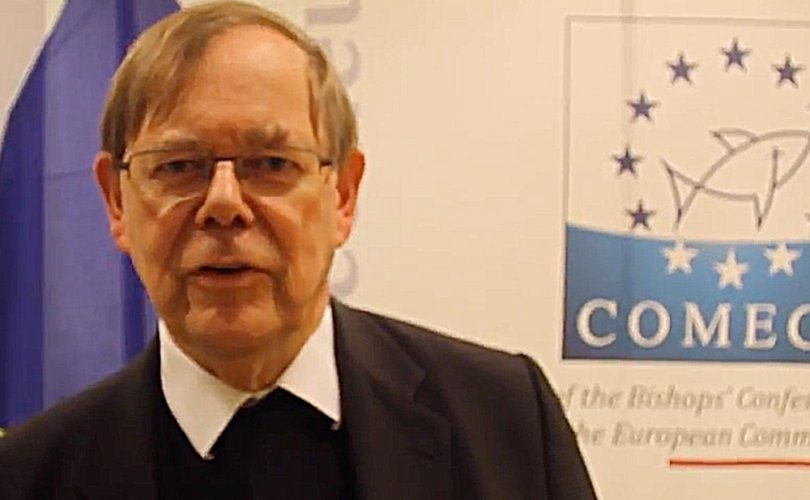 January 29, 2020 (LifeSiteNews) – Father Hans Langendörfer, the secretary of the German Bishops' Conference, has given an interview about the German “Synodal Path” which critics say aims at overturning the Church's teaching and discipline regarding the topics sexuality, celibacy, and priestly ordination. In it, he makes it clear that there is “no ban on discussing the priesthood of women,” adding that one “always has to start spiritually and theologically with the pastorally given situation.”

Langendörfer – who has been the secretary of the German Bishops' Conference since 1996 – explains that “new in the situation is that these assemblies can also come to conclusions that pertain to the Roman level: not on a level of a council, but on the level of the Holy Father and his Curia.”

The priest herewith implies that the German bishops' synodal path has new competences that have not existed heretofore.

“We think that it is not acceptable that all the themes that are to be decided now and in the future in Rome are being decided upon without participation of the local churches,” he says.

Speaking with the German newspaper Bonner General-Anzeiger, Langendörfer insists that the Catholic Church in Germany, in light of the clerical sex abuse crisis, urgently needs change. “After the publication of the sex abuse study, ” the Jesuit priest explains, “we realized, that there are in Germany an entire set of blockages.” He quotes scientists who claim that these blockages – for example in the field of the sexual morality, the image of the priest, as well as the question of access to the priesthood – have contributed to the sex abuse crisis.

“We want to walk a new path,” Langendörfer states, and points out that for that, the involvement of laymen is needed, next to the clergymen and bishops. “For that,” he continues, “we enter onto a special path which canon law – which prescribes certain forms – does not know this way.” This new way, according to this German priest, “brings laymen and bishops together, onto the same level.” He goes on to say that this new path does not lead “out of the Church, as often is claimed,” but, rather, that it “leads into it.”

Some changes can be implemented by the individual bishops or the bishops' conference itself. However, adds the priest, “new in the situation is that these assemblies can also come to conclusions that pertain to the Roman level: not on a level of a council, but on the level of the Holy Father and his Curia.” “We think,” he continues, “the different regions of the world can and ought to carry to Rome proposals” in order to take into account on the level of the Universal Church the “considerations of different cultures.” This approach, the German priest continues, would bring “also a new credibility.”

While he and like-minded advocates for change “do not expect that Rome has to implement what we decide here in Germany,” they do “want to name certain insights and convictions and we expect that Rome takes heed of them.”

Father Langendörfer says, for example, that there needs to be a “discernment of spirits,” always “starting with the realities” and taking “spiritually and theologically” into account the “pastorally given situation.” Here, a discussion of the female priesthood is not forbidden, according to this influential priest. “When one links this [method] with the experiences of the dioceses and communities, there are to be found a large variety of possibilities for discussion.”

Pope John Paul II ruled in 1994 that there no possibility to ordain women to the priesthood, thus making a definitive decision in this matter. He then stated that “in virtue of my ministry of confirming the brethren (cf. Lk 22:32) I declare that the Church has no authority whatsoever to confer priestly ordination on women and that this judgment is to be definitively held by all the Church's faithful.”

The comments of  Langendörfer make it clear that the German “synodal path” aims at discussing matters that have already been ruled in a definitive manner by the Magisterium.

He also shows that this synodal path involving to a large degree laymen in episcopal decisions is not foreseen by canon law. The Vatican had sent, in September of 2019, a letter to Cardinal Reinhard Marx and all the German bishops asking: “How can an assembly of a particular church make decisions on topics of the Universal Church, and how can a bishops' conference be dominated by an assembly, the majority of which are not bishops?”

Cardinal Gerhard Müller, the former Prefect of the Congregation for the Doctrine of the Faith, has recently stated that the Church's ban on female priests is definitive teaching. He wrote that “no synod – with or without the Pope – and also no ecumenical council, or the Pope alone, if he spoke ex cathedra, could make possible the ordination of women as bishop, priest, or deacon. They would stand in contradiction to the defined doctrine of the Church.”

In a 29 January article written for the German Catholic newspaper Die Tagespost, the German cardinal warns against adapting the Church's doctrinal and moral teaching to the “zeitgeist” and to see in the “realities of life” a “source of revelation.” He reminds us that synods or councils are not “to create a new church or to adapt her doctrinal and moral teaching to the changing zeitgeist and to the dominating world views and ways of life.”

Pope Benedict XVI and Cardinal Robert Sarah just published a book on priestly celibacy in which they strongly defend this charism and Church discipline which is based on Apostolic Tradition. Cardinal Sarah also strongly opposes female deacons.

On January 30, the first synodal assembly will take place in Frankfurt. The synodal path is planned as a two-year-long process, with the heavy involvement of laymen. The assembly, which has 230 members, has more laymen than clergy (121 laymen over 109 clergy).

The Wall Street Journal states in a recent article that Ludwig Ring-Eifel, the head of the German bishops' news agency Katholische Nachrichten-Agentur, “estimates that around two thirds of the bishops – the threshold for passing a resolution [at the synodal assembly] support the ordination of married man and women deacons and half are in favor of blessings for same-sex unions.”

Cardinal Rainer Woelki (Cologne) and Bishop Rudolf Voderholzer (Regensburg) are among the few German bishops who publicly criticize the orientation of the German synodal path. They tried to get at least a discussion forum established that would discuss the question of Evangelization, but this proposal was turned down by the majority of the German bishops.

As Woelki just told the German Catholic journal Herder Korrespondenz, he, together with a group of German bishops, requested that the discussion forums “are to be filled in such a way that there is also really taking place a discussion between different viewpoints and that all the voices in the Church are being heard.” He revealed that the four discussion forums were set up after last year's episcopal spring assembly without consultation of the German bishops. Woelki says that “these forums were already established and were already working. At the time, I criticized that the composition of these working groups was very one-sided.”

Woelki says that, at the end, “each diocesan bishop has to face his responsibility before Christ and as given to him by the Church.”