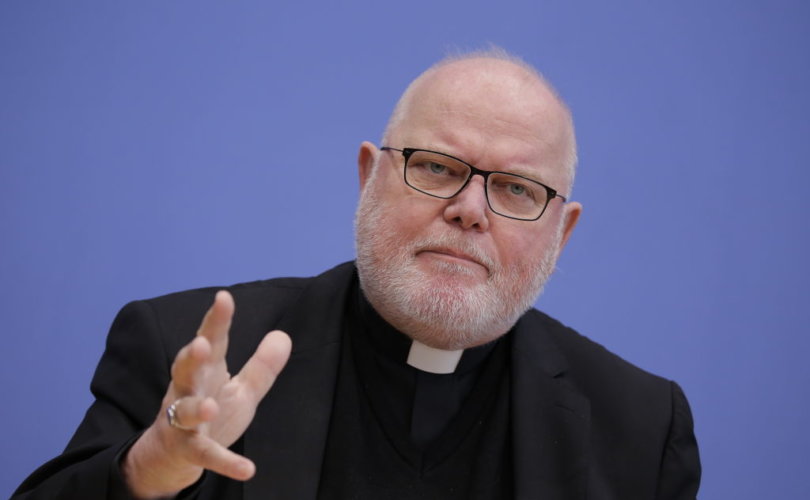 The German bishops have now decided to further discuss these themes in a series of discussions which they call a “synodal path.”

Cardinal Marx – the President of the German Bishops' Conference and archbishop of Munich-Freising – gave a press conference today at the conclusion of the spring assembly. He pointed out that the German bishops dealt with the “systemic” problems related to the abuse crisis, something that “was not discussed in Rome” at the recent sex abuse summit. Here, it is about “dangers of a systemic nature.” As far as he knows, Marx added, “we are the only local Church that confronts this question now.”

The press conference had been delayed because, as Marx revealed, only in the last thirty minutes of their gathering were the German bishops able to agree on starting a “synodal process” in Germany to discuss these matters further. For this, three discussion forums will be led by Bishop Felix Genn (on celibacy), Bishop Franz-Josef Bode (on sexual morality), and by Bishop Wiesemann (concerning questions of power and participation). In September, the first results are to be presented. This process is to be undertaken “together with the Central Committee of German Catholics” (ZdK), Cardinal Marx, who showed himself very content with the outcome of this spring assembly, explained. He later told the audience that he had quickly called Professor Thomas Sternberg, the head of the ZdK, in order to receive his commitment to collaborate.

Sternberg is known for his promoting the idea of married priests, Communion for “remarried” divorcees, and other progressivist themes.

In explaining the proposed topics that will be further discussed by the German bishops, Cardinal Marx pointed out three aspects: the question of power, of celibacy, and of the Church's sexual morality.

“The question is permitted: does celibacy always have to be?” he explained and added that “the Catholic Church now already has married priests.” Marx also referred to one of the candid speakers during the Episcopal meeting, Professor Eberhard Schockenhoff, who has proposed a loosening of the Church's moral teaching, to include the acceptance of contraception, cohabitation, gender theory, and homosexual couples. Cardinal Marx sympathetically commented on the contribution of this speaker, saying that Schockenhoff “presented it [the debate about sexual morality] very well.” There is, he added, also “a need for discussion about the Catechism.”

Schockenhoff had been earlier a participant at a controversial May 2015 Day of Study in Rome in preparation for the second Synod on the Family, which had been organized by, among others, the German Bishops' Conference.

Cardinal Marx explained during today's press conference that “the majority of the bishops” thought that there “is a need for change” with regard to the sexual morality of the Church. The German bishops unanimously agreed to start a “synodal process” at the end of which they might, said Marx, send a “letter to Rome, when there are points that we cannot clarify,” thereby introducing their themes to the Universal Church. He later added that, in former times, the German bishops had already seen the need for such a discussion – even sending, after their national Würzburg Synod in the 1970s, a set of questions to Rome – but that they did not then receive any answers from Rome. At the time, certain things could still not be discussed openly, he added, “because there one could have problems with Rome.” “But,” he concluded, “that time is now over.”

Cardinal Marx made it clear that there has taken place a “turning point” in the Church. “Things cannot continue anymore as they did,” he stated.

During the spring assembly on March 13, one of the officially invited speakers, Professor Philipp Müller, proposed to discuss further the idea of ordaining the so-called viri probati, morally proven married men. According to his proposal (which he has worked on with a colleague of his, Professor Helmut Hoping), married men who are 50 years or older, could be ordained. He explicitly referred here also to statements made by Pope Francis, but admitted that even the Pope has not yet made a decision in this matter.

Professor Eberhard Schockenhoff, who also spoke on March 13 at the Spring Assembly of the German bishops, now proposes a complete overhaul of the moral teaching of the Catholic Church. After rejecting the fundamental traditional claims that sexuality is ordered toward procreation – and thus it being licit only between a man and a woman, and in a sacramental marriage – and that human nature has been wounded by original sin and thus needs authoritative moral guidance, the Freiburg theology professor proposes the following progressive points: