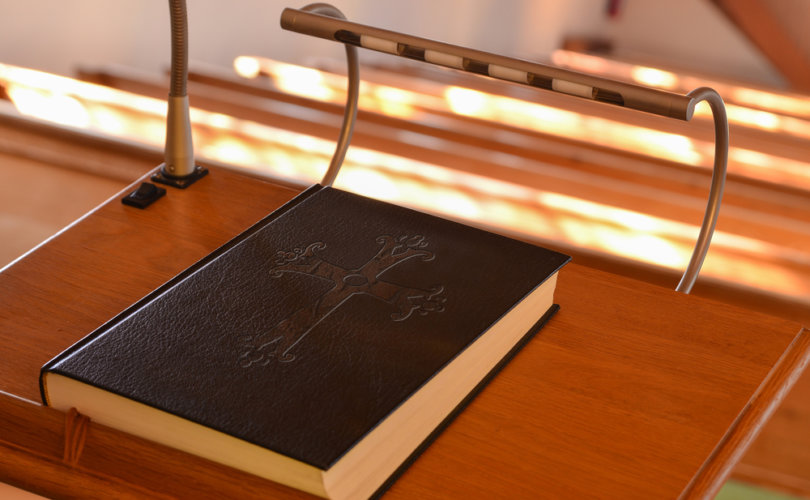 July 19, 2019 (LifeSiteNews) – In light of the upcoming October 6-27 Pan-Amazon Synod in Rome, the question of female ordination is currently being intensely debated. Katholisch.de, the official website of the German Bishops' Conference, just published an article written by Father Nikodemus Schnabel. This Benedictine monk proposes, as a sort of compromise, that women would, alongside the priests, be in the sanctuary. While the priest would celebrate Mass, a woman would deliver a homily.

In a July 17 commentary, Father Schnabel – who has lived for many years in his community in Jerusalem, Israel, but currently has duties in Berlin, Germany – admits that he is still trying to come to a conclusion as what should be done with regard to female ordination. After all, he says, “it is about giving women a more important role at the celebration of the Eucharist,” since liturgy is the “peak” of the Church's life, according to the Second Vatican Council. For Schnabel, just to give women more leadership positions in the Church “cannot be the only answer.”

“Additionally,” he continues, “the urgent question poses itself to me as to why it is necessary that a clergyman has to deliver the homily at the celebration of the liturgy?” Schnabel refers to the fact that also deacons, who are themselves not celebrating the Holy Sacrifice of the Mass, are permitted to preach.

Father Schnabel also asks “what speaks against a true re-discovery of the liturgical office of the lector and of the female lector, with which only non-clergymen can be tasked?” His idea is that these lectors would then be not only tasked “with the proclamation of the Word of God, but also with its exegesis.” This new office, he adds, would require that “only women and men entrusted with this office who have a sound theological and homiletic formation.”

This idea of having more female lectors seems to be circulating among many German-speaking progressivists, among them prominently Cardinal Walter Kasper, who recently proposed in comments to LifeSiteNews to give women a special blessing, without ordination. These women could then be lectors and Eucharistic ministers, as they have been doing for a long while already. Kasper's idea leaves out the contested idea of ordaining women, but they still would increase their presence in the sanctuary.

As John-Henry Westen just recently in his own John henry Westen Show pointed out, Holy Scripture – here St. Paul – states it clearly that “women should be silent in the churches” (I Cor. 14:34), thus forfeiting the idea of women preachers.

Nevertheless, even the Vatican's own newspaper, L'Osservatore Romano, published in 2016 several articles, two of them by women, who proposed just that: that women may be permitted to preach during Mass, from the pulpit. As Sister Catherine Aubin, O.P. asked in her article: “Let us sincerely pose a question then: why can't women also preach in front of everyone during the celebration of Mass?”

The Church's canon law states that only a male priest or deacon may preach during the celebration of the Holy Mass.

One source with insight into the discussions that are going on in these German episcopal circles with regard to their agenda at the upcoming Amazon Synod told LifeSiteNews: “One will demand two things [at the Amazon Synod]: female diaconate and abolishment of celibacy. These are two colossal things. When one cannot push through both, then one will preserve celibacy and will be content with the female diaconate.”

“That is the true goal,” this well-informed source who spoke to LifeSite on condition of anonymity, added. “When the deacon may preach,” he continues, “then a female deacon may do the same, and then the way is open to the ordination of female priests. After that, celibacy is going to fall anyway.”

In a recent critique of the Amazon Synod's working document, Cardinal Walter Brandmüller had pointed to the danger of a female priesthood. “It is impossible to conceal,” he writes, “that the 'synod' intends, above all, to help implement two most cherished projects that heretofore have never been implemented: namely, the abolition of priestly celibacy and the introduction of a female priesthood – beginning with female deacons. In any event, it is about 'identifying the type of official ministry that can be conferred on women … in the Church (129 a 3).' In a similar manner, 'room is now opening up to create new ministries appropriate to this historical moment. It is the right moment to listen to the voice of the Amazon…' (n. 43).”

Brandmüller then reminds us that Pope John Paul II “stated with highest magisterial authority that it is not in the power of the Church to administer the Sacrament of Holy Orders to women. Indeed, in two thousand years, the Church has never administered the Sacrament of Holy Orders to a woman.” The German cardinal insists that this idea of ordaining women “stands in direct opposition to this fact [of these papal words]” which shows him “that the word 'Church' is now being used purely as a sociological term on the part of the authors of the Instrumentum Laboris, thus implicitly denying the sacramental-hierarchical character of the Church.”