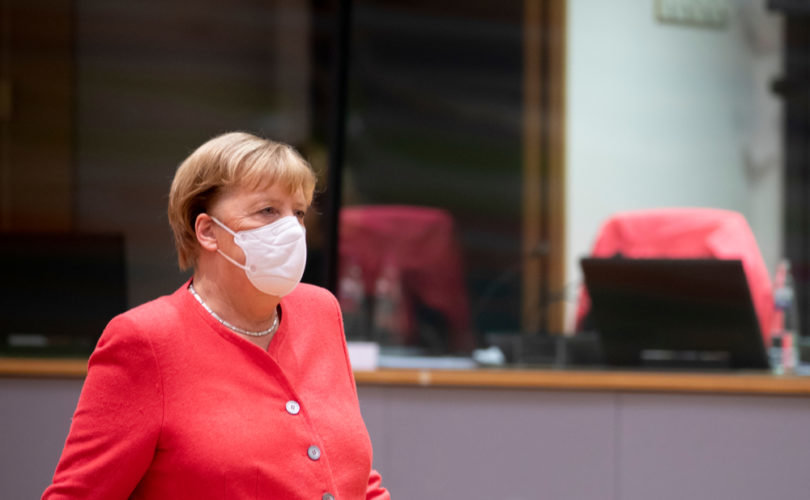 BERLIN, Germany, March 24, 2021 (LifeSiteNews) — Germany will have public religious ceremonies (albeit restricted to a significant extent) for Easter, after all. Due to what she called a “new” COVID pandemic, federal chancellor Angela Merkel decided on Monday to impose severe restrictions over the Easter weekend, starting on Thursday, April 1, and including Monday, April 5. Less than 48 hours after the announcement of the near total five-day lockdown, Merkel was forced to back-pedal because of widespread criticism.

The scrapping of the five-day lockdown was announced by the chancellor herself this Wednesday at a press conference. “A mistake must be called a mistake, and even more importantly, it must be corrected, if possible in good time. I know that this proposition has sparked extra uncertainty. I regret this profoundly and beg pardon from all citizens,” she said, assuming the “ultimate responsibility” for the move.

Under the five-day rule, which had been negotiated with the minister presidents of the 16 German federal states following twelve hours of videoconferences on Monday, all businesses, industries, shops, schools, etc. would have closed from Thursday through Monday throughout Germany. This would have included grocery stores, which would have had a short window on Holy Saturday to open and allow the public to run last-minute food errands. No more than five people from a maximum of two households (not including children under 14) would be allowed to meet over the period.

Most importantly, all religious services would have had to be virtual under government regulations, barring Germans from all “in person” celebrations of the most holy days in the Christian calendar, including Mass on Maundy Thursday, the liturgy and stations of the cross on Good Friday, the Easter Vigil, and Easter Sunday Mass.

These anti-religious measures led to Merkel being publicly criticized from within her own federal government. On Monday morning, before Merkel had canceled plans for the Easter lockdown, interior minister Horst Seehofer told the popular daily Bild: “It has already amazed me that parties with the C [for Christian] in their name, of all things, are suggesting that churches refrain from holding services, even more so at Easter.”

He added: “The Ministry of the Interior worked out hygiene plans together with the churches very early in the pandemic, and they still work flawlessly today.”

Angela Merkel, the daughter of a German pastor, Horst Kasner, who was known for his ties to the Communist authorities in former East Germany to the point of being called “Red Kasner,” followed the admitted pathway for children and adolescents in the German Democratic Republic, joining official youth movements. When Germany was reunified after the fall of the Berlin Wall, Merkel joined the Christian Democratic Union — the CDU — and later obtained ministerial posts related to the environment and nuclear energy before becoming the CDU’s leader in 2000, and federal chancellor in 2005, a position she has held since then.

Her decision to ban all public Masses and other religious services at Easter, at all times, was immediately denounced by both the Catholic Church and Protestant denominations in Germany. They made clear that they did not want to accept automatic banning of public attendance at services.

The chairman of the German Bishops’ Conference (progressivist) Georg Bätzing, and Heinrich Bedford Strohm, chairman of the Evangelical Church in Germany, said they were “surprised” by the sudden request for total lockdown. On Tuesday, talks were already being held by representatives of the Churches and the federal government.

The president of the often anti-Catholic Central Committee of German Catholics, Thomas Sternberg, complained that the government did not make a difference between opening stores and allowing churches to be open to the faithful, arguing that a solution could have been found to act “responsibly while maintaining strict rules.”

Individual federal states also hinted that they would resist the measures, particularly regarding church attendance: in Lower Saxony, center-left Social Democrat Stephan Weil announced that talks would be held before any decision was made. Saxony’s prime minister Michael Kretschmer flatly refused to close churches for Easter and ban in person services, saying that he had no doubt “that the churches, the religious communities, will find a wise and responsible solution.”

Industries, commercial companies, and stores also blasted the five-day lockdown, stressing that it was both useless against the current surge of COVID “cases” over such a short period, and impossible to prepare and implement when no provisions had been made for salary replacements and there was no time for professionals to reorganize their activities properly.

The economic repercussions of yet another curb on commercial activity were also underscored, with even more important shortfall at a time when sales are traditionally high.

The plan temporarily to open grocery stores on Holy Saturday, for its part, angered mainstream epidemiologists who warned that it would lead to crowding in shops and “super-spreader” events.

Criticism reached such a level that new emergency talks between Merkel and the leaders of federal states were held this Wednesday morning and the whole plan was scrapped, which of course raises doubts about the true gravity of the situation in Germany.

Merkel’s withdrawal of the plan leaves many questions unanswered. A number of measures are apparently still being added to the current list of restrictions, including the banning of short, “low-contact” vacations within Germany.

Germans find it hard to understand why they are being told not to travel between regions with hotels, restaurants, and camp sites shut for tourism (to the point where many fear having to file for bankruptcy by June), while flights to the popular Spanish island resorts of Mallorca are allowed again since last week without any quarantine obligation for returning travelers.

Fear is still the operative element of official language. Official epidemiologists warn that contaminations (“cases”) were on their way to reach daily records of over 60,000 positive tests, compared with a 7-day running average of about 13,700 per day, while deaths have fallen to a running, quite stable average of 186 after a peak of an average of about 850 deaths per day in mid-January.

But the situation is not bad enough to prevent Merkel from being sensitive to widespread anger and opposition, meaning that she is probably not afraid of being accused in a few weeks’ time for not having stood firm.

The lesson to be learned from these events is that in the present situation, protests and resistance are far from useless.