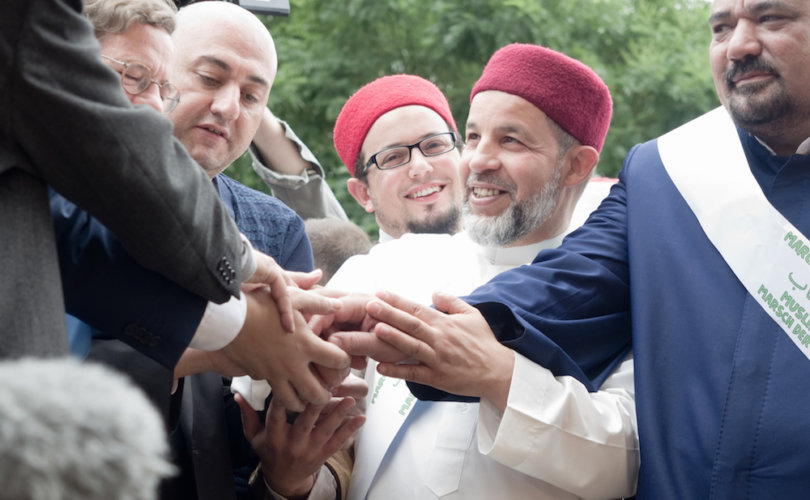 Muslims, expanding their presence in Germany and throughout Europe, are viewed by homosexuals as a threat.Flickr.com

GERMANY, September 27, 2017 (LifeSiteNews) – Many around the world are shocked that Germany’s far-right political party, Alternative für Deutschland (AfD), won 94 of 709 seats in the Bundestag earlier this week — a feat unseen for the county’s far-right since the defeat of the Nazis in 1945.

What is perhaps far more astounding is that the party’s leading figure is Dr. Alice Weidel, a lesbian raising two children with her female partner who is also firmly against same-sex “marriage.”

While the combination of “right-leaning” and “LGBT” may be a rarity in the United States, Dr. Weidel’s assent is indicative of a significant trend in Europe, and in Germany in particular, as gays have come to realize that the spread of Islam represents a very real existential threat.

The Daily Mail reported, “The anti-immigration AfD won 12.6 percent in an election which saw both Merkel's Christian Democratic Union (CDU) and her coalition partners hemorrhaging millions of voters to the far-right.”

“The news that the AfD had become the third largest party in parliament led to protests across Germany on Sunday evening,” the report continued.

European gays are waking up to the fact that Islam condemns them.

A gay man living in Paris recently told the Associated Press, “Faced with the current threats, particularly from radical Islam, gays have realized they’ll be the first victims of these barbarians, and only Marine is proposing radical solutions.” Marine Le Pen heads France’s far-right Front National (FN), which now enjoys higher support among gays than among heterosexuals and has more top aides known to be gay than all other French political parties.

A former leftist German gay explained that now it “is too dangerous for gay people to live openly here … We need a party that's talking openly about this.” And like FN, AfD is now supported by a higher percentage of gays than of straights.

During Germany’s push to legalize same-sex “marriage” earlier this year, Dr. Weidel claimed via Twitter that debating “marriage for all” is “a joke,” while millions of illegal Muslim immigrants are invading Germany, adding elsewhere, “As if (gay marriage) were Germany's most pressing problem.”

When it was legalized in June, the AfD website posted: “In deep sorrow, we say goodbye to the German family, whose constitutional protection was buried by the 'representatives of the people' at the German parliament.”

Now that the left has won the same-sex marriage battle, the pecking order among its favored victim groups has shifted. Gay white males have moved to the bottom rung of the ladder and Muslims enjoy life at the top.

“(W)hen gays criticize Islam, a decent progressive is supposed to scream ‘Islamophobe,’ noted Bruce Bawer of PJ Media. “(B)ut when Muslims drop gays to their deaths off the roofs of buildings, one is expected to look away and change the topic.”

Most American gays remain uncritical toward Islam. “They've bought into the idea that they and Muslims are fellow members of the oppression brigade,” Bawer continued. “Either they're unaware that sharia law prescribes execution for gays and that a large majority of Western Muslims are totally OK with that, or they've allowed themselves to be convinced that Muslims today don't care any more about Islamic law than most Christians or Jews do about Leviticus.”

“Or, even more worrisome,” Bawer concluded, “they've worked out some Orwellian way of knowing the truth while at the same time not knowing it.”

The Koran explicitly condemns homosexual activity, and Sharia Law enumerates severe punishments: “Kill the one who sodomizes and the one who lets it be done to him. May Allah curse him who does what Lot's people did. Lesbianism by women is adultery between them.”

Over the last few years, we have seen pictures and heard reports of gay men being thrown off buildings in Iraq and Syria, while teenage boys accused of homosexual activity have been sentenced to die and hung in makeshift gallows in Iran. Others have been stoned to death in ISIS-controlled regions.

Yet in the United States, Christians continue to be declared the biggest threat to the lives and happiness of gays, with the Southern Poverty Law Center (SPLC) identifying many Christian organizations as “hate groups” simply because they believe in the immutabile definition of conjugal, complementary marriage, or seek to protect the lives of the unborn.