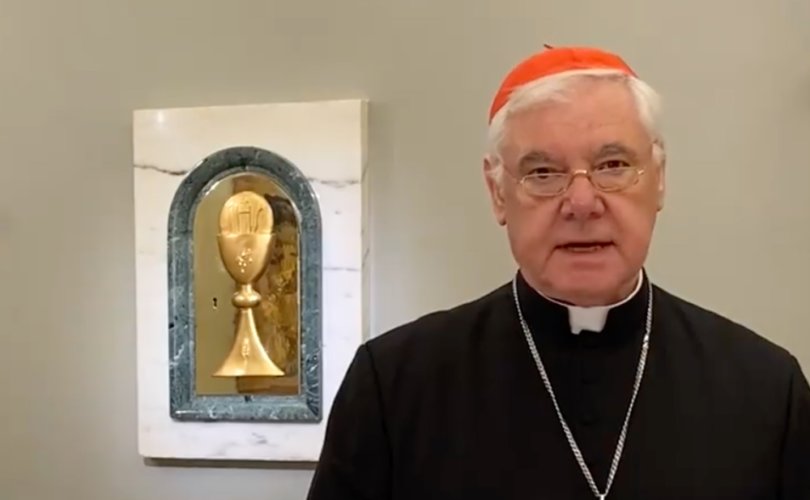 (LifeSiteNews) — Cardinal Gerhard Müller has come under public criticism in Germany after he gave an interview to Alexander Tschugguel and his Bonifatius Institute in an attempt to support the Austrians who suffer currently under harsh corona lockdowns and measures.

Bavarian Minister-President Markus Söder and Matthias Kopp, a spokesman for the German Bishops’ Conference, distanced themselves from Cardinal Müller’s critique of the Great Reset, the agenda of a small elite who wishes to use the corona crisis for their own political interests.

On December 6, Cardinal Müller did the interview with Tschugguel, an Austrian activist who posted a part of that interview on Twitter. The full, wide-ranging interview that LifeSite was able to obtain covered topics such as whether vaccine mandates are permissible, whether it was right that bishops restrict access to the Sacraments, and whether Austrians may protest against some of the corona restrictions of their government.

The interview was calm and well-balanced. Part of the German prelate’s comments were aimed at criticizing the group of globalists around Klaus Schwab of the World Economic   Forum (WEF), George Soros, and Bill Gates, all of whom are pushing the vaccine agenda, among other things.

The overall plan of the Great Reset, presented by Schwab’s World Economic Forum, would lead to a fundamental reform of the world’s economies, distribution of wealth, and an increasing technological dependency and control for humans. To symbolize the ideas of the WEF, it placed on Twitter a quote from a Danish politician: “Welcome to 2030. I own nothing, have no privacy, and life has never been better.”

It is this development that Cardinal Müller criticized in the December 6 interview. As LifeSite reported earlier today, the prelate said the COVID pandemic is being used by the globalist elites as a way to usher in their Great Reset agenda.

He talked about “the wish to use this opportunity to subject the people to complete control [and] to establish a surveillance state, just like the proponents of the Great Reset said themselves.” Here, Müller quoted Schwab, who described the COVID-19 pandemic as an “opportunity” to implement Great Reset. Schwab wrote in the summer of 2020 that the pandemic “represents a rare but narrow window of opportunity to reflect, reimagine and reset our world.”

“Many people are dying, are sick, are severely restricted in their lives, the economy is badly damaged, children cannot go to school, which will have dramatic long-term effects for their souls and spirit,” Müller went on to say. “Then there are people who, from the height of their wealth, look down on these everyday struggles and who then proclaim loudly that this is an opportunity to push their agenda.”

The cardinal argued that the Great Reset agenda is “based on fraud” and explained that the fraud consists in the idea that men can, “through modern technology or modern communication, bring forth a new creation, create a new human in their image and likeness.”

The German prelate insisted that he did not “want to be saved and made in the image and likeness of Klaus Schwab or Bill Gates, or Soros and other such people.”

“I do not understand it,” Söder commented. “The protection of people has to be placed first, he added, while at the same time there can be seen a ‘relapse into a rejection of science with the help of very strange theories.’ The politician expounded that the bishops and cardinals should better follow the example of Pope Francis, who has been vaccinated.

Before going on to other critics, let us remember that this is the same minister-president whom Dr. Robert Malone, the inventor of the mRNA vaccine technology, had strongly criticized in a recent LifeSite interview. Commenting on Söder’s claim that only with universal vaccination Germany could be freed of the coronavirus, Dr. Malone stated, “I would respond that it’s grossly naive. How many times do we have to say: These vaccines are poorly effective at preventing infection, replication and spread. They are partially protective against disease. Natural immunity is significantly more protective against disease.”

In this instance, the vaccine expert actually came to the same conclusions as Cardinal Müller, because one of the reasons might be “that the leadership in the European Union and throughout the West, including the United States, has been captured functionally by the economic interests of some financial entity, of which the pharmaceutical industry is a component.”

Further describing the power of international financial groups that seem to be able to influence the world’s common response to the current corona crisis – to include the “insane push for universal vaccination” – Dr. Malone said:

“I’ve become convinced that we do have a situation that is essentially the growth and expansion of global tyranny that is harmonized, that is managed, that is aligned across nation states, and it appears to be aligned with the economic interests of a small cluster of investment funds that represents the bulk of global western capital. And what I’m particularly alarmed about – me and many others, and apparently also the archbishop [Archbishop Carlo Maria Viganò] – is that this pool of capital is so large now that it has more power than individual nation states do.” This capital has become so powerful that “it can dictate policy, economic policy and national policy in different nation states. And that capital has acquired all of the main media, all of the Big Tech and all of the major vaccine and pharmaceutical companies. And it’s all this is why it’s acting globally in an integrated fashion.”

Commenting on the Austrian and German government’s decision for more lockdowns and increased vaccine mandates, Dr. Malone said that they “have gone mad.”

Four members of the Bavarian Green Party also expressed indignation, calling Müller’s comments “shocking.” They wrote in a letter to the cardinal and Bishop Rudolf Voderholzer of  Regensberg that they did not think it possible that such a high-ranking churchman would express “so openly and without restraint such crass and anti-democratic conspiracy theories.” The left-wing politicians also rebuked the cardinal for promoting “incendiary, anti-semitic codes.”

Kopp posted on Twitter, “One is very astonished about these theories! Cardinal Müller speaks here – I assume – as a private person.”

Prominent German magazine Der Spiegel even transported the public criticism of Cardinal Müller onto the international level by reporting on it in English.

Felix Klein, the German government’s official tasked with dealing with problems of anti-semitism declared in a statement that he expects “that the Catholic Church clearly and unambiguously distances herself from the irresponsible statements of Cardinal Müller.” The Central Committee of German Jews argued similarly, saying the Cardinal had used “anti-semitic codes,” which is “irresponsible and not acceptable.”

The accusations of anti-semitism are based on the simple fact that Cardinal Müller had mentioned, next to Gates and Schwab, the multi-billionaire Soros.

Cardinal Müller was astonished by the reactions.

“When people, who do not even know how to open up a Hebrew Bible, accuse, with the help of mendacious headlines, a theology professor of anti-semitic codes, then there is no way of healing the intellectual and moral insanity of our opinion leaders,” he wrote to LifeSite.

The prelate added that “this indignation, artificially created by indignation theorists, is not about arguments in an objective debate; instead, it is again merely a battle against persons who for once speak the truth.” Furthermore, the cardinal pointed out that none of the commentators actually referred “to the interview, but, rather merely to its falsificated version of the media.”

The German prelate stated in response to the accusations that “by defending problematic persons and the Great Reset agenda, one places oneself on the side of the super-rich, who have greatly profited from the crisis, on the back of the middle class who had great disadvantages.”

In conclusion, he also pointed out that “in certain countries religious freedom has received the greatest damage.”

One commentator wrote under the tweet of the German bishops’ conference against Cardinal Müller: “May Catholics be critical of this ‘global agenda,’ or is one being immediately labeled as ‘conspiracy theorist?’”

One could also comment: Dear opinion leaders, we are getting tired of the same old techniques of silencing a much-needed debate. Your aggressive response to the comments of one retired cardinal only confirm that the cardinal’s words must have had some truth to them.